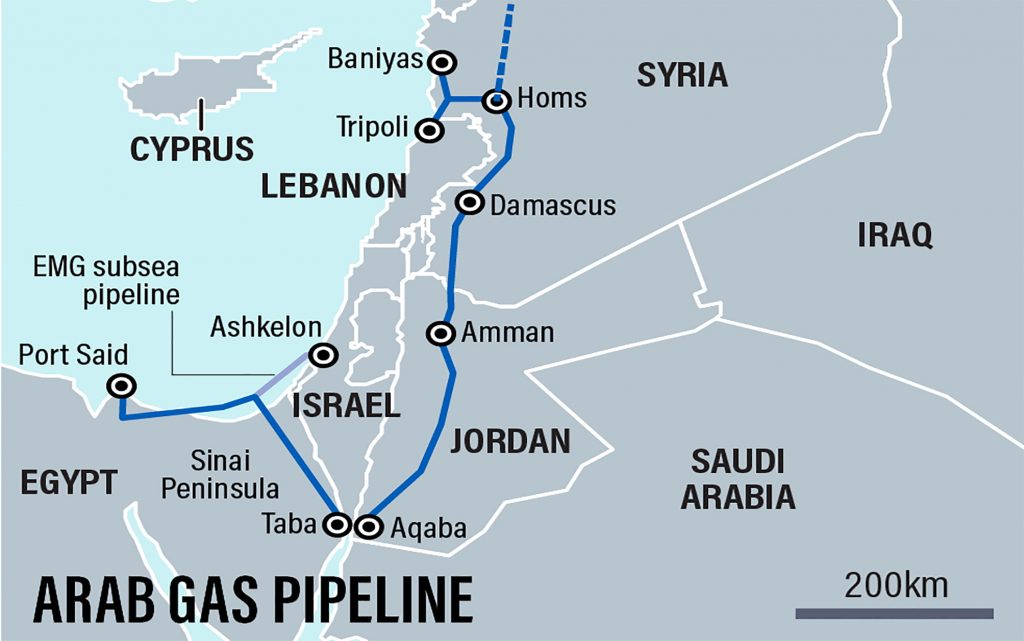 It seems that Damascus’s assurances of the readiness of the Arab gas pipeline inside its territory, to start pumping Arab gas to Lebanon through Jordan and Syria, revealed Cairo’s fears of being subjected to US sanctions now or in the medium and long future, as a result of its continuation in this project in accordance with Caesar Act as a result of its dealings with the Syrian government.

Egypt is in the position of the hesitant, and despite the conflicting statements between the Egyptian Minister of Petroleum and the spokesman for the ministry, sources in the Egyptian government confirmed that Egypt is seeking to obtain guarantees from Washington to be exempted from the sanctions of the Caesar Act when starting to supply gas to Lebanon through Syria.

This was confirmed by the Egyptian Minister of Petroleum Tarek al Molla, and denied by the ministry’s spokesman, Hamdi Abdul-Aziz, when he stated through the Russian Sputnik news agency, stressing that Lebanon is the one who negotiates with the US administration in this regard, and that “Lebanon is working in this direction, and Egypt will start pumping gas as soon as possible… All papers and procedures are to be fulfilled”.

Egypt realizes, with its knowledge of the US dealings, that its failure to obtain real guarantees will expose it to the risk of sanctions in accordance with Caesar Act in the future.

If Cairo doesn’t obtain real guarantees from Washington about the Arab gas project, the project will turn into a sword hanging over its neck and the neck of all those who will participate in it.

Any US administration may use it to pressure Cairo on the pretext of violating Caesar Act.

The Egyptian fears came despite the verbal US assurances, which were conveyed by the Lebanese Minister of Energy and Water, Walid Fayyad, when he met with Amos Hochstein, the senior adviser to the US State Department for Energy Security (the new US mediator in the indirect negotiation process on the demarcation of the southern maritime border).

He stressed in a statement that: “The US administration issued a letter of reassurance that secures the protection of the project and the parties involved in it from the repercussions of the penalties of the Caesar Act”.

The United States only gave assurances that it won’t punish any country under Caesar Act for participating in the project.

The Arab Gas Pipeline, but there is nothing documented and written or real guarantees, this verbal order isn’t considered guarantees, reminds us of the term “US paperless,” meaning that it is something that is not binding, so Cairo seeks written guarantees to avoid future sanctions.

The possibility of the United States giving “written documents” to Cairo regarding guarantees that it won’t be subjected to future sanctions, according to Caesar Act.

Indications reveals that, the United States won’t give any written document or documented guarantees, because Caesar Act was approved by the US Senate, and not by the US president, and it is a law linked to the US Department of Defense, and this is what frightens Cairo and makes it a reluctant position in this project, it may cause the gas project end due to Cairo’s request for these guarantees.

The Arab Gas Pipeline project is considered one of the most important gas transportation projects in the Middle East, and its history dates back to the year 2000, as it represented a turning point and the beginning of the export of gas to Europe through Turkey, through Jordan and Syria.

The length of the Arab Gas Pipeline is about 1200 km, extending from the Arish area to Taba in Egypt, then to Aqaba, and from there to Rehab in Jordan, and from Rehab through Jaber to Homs in Syria, to the Deir Ammar area in Lebanon, with a capacity of 7 million cubic meters of gas per year.