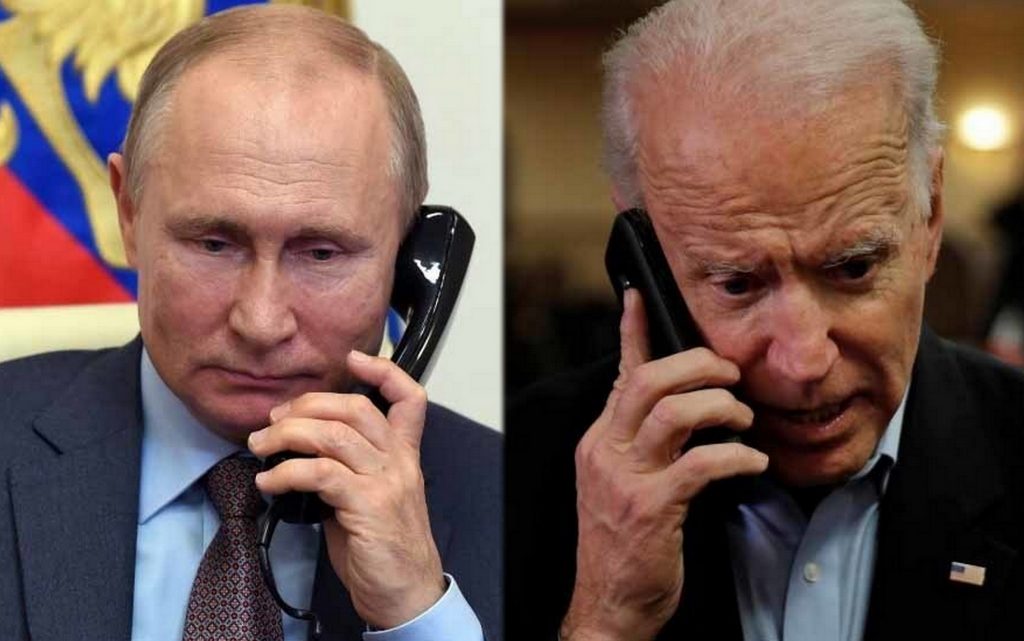 Signs emerged Thursday to organize a conversation between Russian President Vladimir Putin and US President Joe Biden to avoid the return of the “terrifying scenario of military confrontation” between the two superpowers.

In the midst of the escalating tension over Ukraine, Moscow requested “strong and long-term security guarantees” at its borders, especially after its neighbors joined NATO.

This was stated by Russian Foreign Minister Sergei Lavrov during his meeting with his American counterpart Antony Blinken on the sidelines of the Organization for Cooperation and Security in Europe meeting near Stockholm.

It is expected that the tense dialogue between the two powers will move to the level of the two presidents who may make a phone call.

Russian Deputy Foreign Minister Sergei Ryabkov said he hoped “communication will be established between the two presidents in the coming days”.

Blinken confirmed that it was likely that the two presidents would speak in the near future.

In Sweden, the US and Russian head of diplomacy escalated the warnings, but while affirming the two countries’ desire to resolve the Ukraine crisis through diplomacy.

“We’re deeply concerned about Russia’s plans to carry out a new aggression against Ukraine,” said Antony Blinken, along with Sergei Lavrov, echoing the accusations he made last Wednesday when he cited evidence of preparations for an invasion.

And he warned that “if Russia decides to continue towards confrontation, it will face dire consequences” after threatening to impose heavy sanctions on Wednesday.

But Blinken also expressed his openness to a diplomatic solution, saying he was ready to facilitate the implementation of the Minsk agreements, which were concluded after Russia’s annexation of Crimea in 2014 to settle the conflict in eastern Ukraine between Kiev forces and pro-Russian separatists, which were not implemented.

After enumerating the terms of these agreements, which Moscow didn’t respect, in his opinion, the US secretary added, “The best way to prevent a crisis is diplomacy”.

According to a senior US official, in a closed-door meeting of US and Russian experts, Blinken suggested drawing up a road map and finally getting the agreements to be respected by all parties.

During the ministerial meeting of the Organization for Cooperation and Security in Europe, which brought together the two rival powers Thursday, as well as Ukraine in the suburbs of Stockholm, Antony Blinken called on Russia to “de-escalate” and withdraw the forces that had recently mobilized, according to the West, at the Ukrainian border.

For his part, Russian Foreign Minister Sergei Lavrov warned Thursday that the “terrifying scenario of military confrontation” has begun to return to Europe against the backdrop of escalating tensions over Ukraine.

The Russian minister accused NATO of “bringing its military infrastructure closer to the Russian borders” and called on the West to study the proposals that Moscow would present “in the near future” to prevent the alliance’s expansion to the east.

Lavrov again opposed any further expansion of NATO towards Eastern Europe, and thus towards Ukraine, but he also stressed his desire to give a chance for dialogue.

“We are interested in making joint efforts to resolve the Ukrainian crisis,” he said, adding that “We’re ready for that”.

However, despite the balanced and serious tone, the meeting didn’t lead to an understanding, knowing that the two men agreed to continue the dialogue, according to a US official.

In what appeared to be a Cold War sign, US Defense Secretary Lloyd Austin slipped on Thursday during a visit to Seoul when he warned of a “Soviet Union incursion” into Ukraine.

Kiev and its Western allies have been warning since November of an increase in Russian troop reinforcements on Ukraine’s borders and the possibility of an invasion.

On Thursday in the Swedish capital, the US Secretary of State also met his Ukrainian counterpart, Dmytro Kuleba, who reiterated his demand for “deterrent measures” for President Vladimir Putin, “that make him think twice before resorting to military force”.

For its part, Moscow, which is accused of supporting the separatists fighting Kiev, denies planning an attack.

These tensions persisted on the ground during diplomatic meetings.

A Ukrainian soldier was killed on the frontline during clashes with pro-Russian separatists in the east of the country, the army announced, while Moscow confirmed that it had arrested three Ukrainian spies, one of whom was accused of preparing an attack with explosives.

US Ambassador to the Organization for Security and Cooperation in Europe Michael Carpenter noted that the organization’s long-planned meeting “comes at a crucial time” with rising tensions at Europe’s gates.