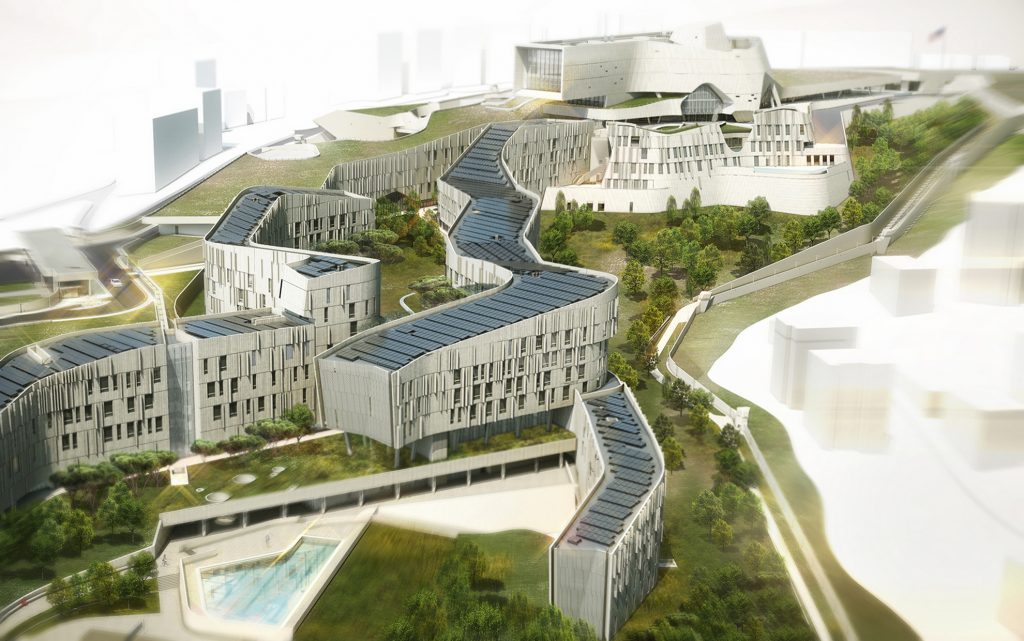 Pictures of the new US embassy, ​​which has been under construction and equipment for more than two years, have spread on social media in Lebanon.

Pictures posted on Twitter and Facebook platforms showed the stage of the construction of the US Embassy in Lebanon, located in the Awkar area, 13 km north of Beirut.

According to the information circulated, construction is expected to be completed in 2023, when it will be one of the largest Western embassies in Lebanon and the Arab world, built on an area of ​​43 acres (180.6 thousand square meters).

The reports about the project, sparked widespread controversy and criticism on social media by Lebanese citizens who raised questions about the purpose of establishing a city.

The US embassy expansion project began two years ago and is expected to be completed in 2023.

The cost estimated at one billion and 200 million dollars, according to a US State Department document, the project includes the construction of an airport inside the embassy, ​​entertainment sites, consulate buildings, and housing units.

The US embassy had posted on its website that “the new embassy facilities in Beirut represent the best of American culture in terms of engineering, technology, sustainability, art and construction implementation.”

This project raised questions about the media propaganda adopted by Lebanese media and political figures about the extent of Iranian influence in Lebanon, which has reached the point of promoting the term Iranian occupation of Lebanon, and some people have gone to wear the mantle of struggle to liberate Lebanon from the new Iranian occupation.

This is propaganda was sponsored by the United States and some Gulf countries, while on the ground, the data indicate the exact opposite, especially that the largest embassy of the United States in the Middle East was established in Baghdad after the US invasion of Iraq in 2003, but the new embassy in Lebanon surpasses it in terms of size, capabilities and construction cost, including It more than doubled, as the cost of establishing the US embassy in Baghdad amounted to about 600 million dollars, while in Lebanon the cost may exceed one billion and 200 million, meaning that the US embassy in Lebanon will be larger than its embassy in a country occupied by direct military occupation.

The size of the US embassy and reports about its new mission, as it is said that it will be a center for managing US military and security operations in Lebanon and Syria, all the way to occupied Palestine and Cyprus, shows the level of challenge that the resistance in Lebanon will face.

It is natural that between this unusual embassy and Israel there are hot lines of coordination directed against Hezbollah directly, especially since the United States places Israel’s security at the forefront of its foreign policy priorities in the Middle East.

According to the current Lebanese scene, the United States appears to be trying to tighten its grip on Lebanon, not only by establishing an embassy that is the largest in the Middle East and expanding its functions, but by monopolizing support for the Lebanese army and strengthening the relationship with its leadership.

Washington’s support is limited to the Lebanese army, whether with equipment, or training to confront internal crises and security challenges in Lebanon, but it prevents the Lebanese army from acquiring any weapons that threaten Israel.

It provides financial support to media campaigns aimed at discrediting Hezbollah inside Lebanon.