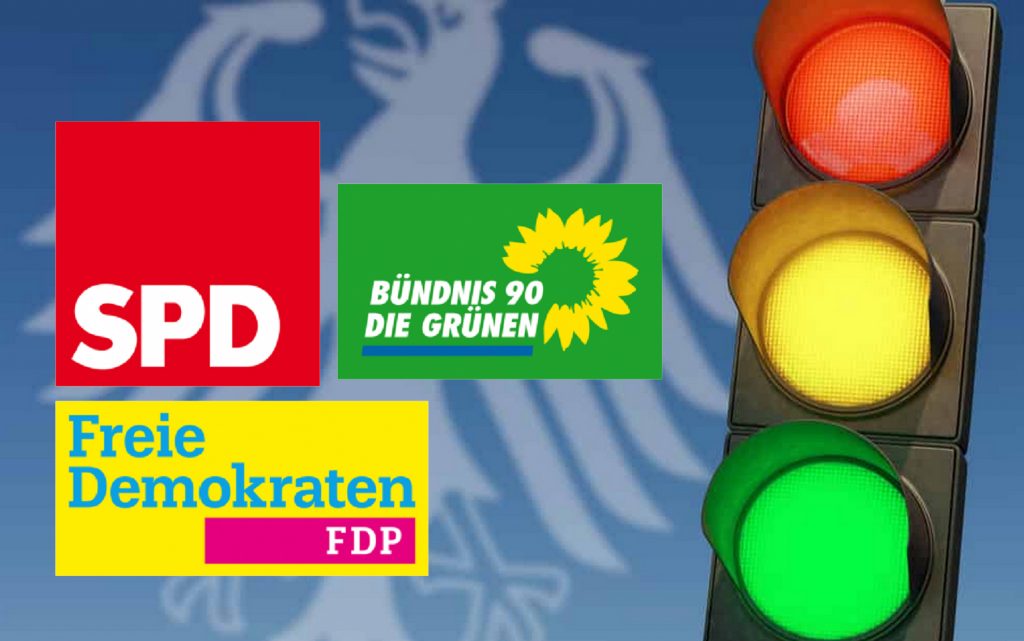 After the German Green Party announced that there had been progress in negotiations on the environment file in the ongoing consultations with the Free Liberal Party and the Social Democratic Party, the largest parliamentary bloc in the new German Parliament (Bundestag), the latter announced that the text of the agreement between the three poles for an upcoming government coalition had been completed, provided that It was officially shown on Wednesday afternoon, around three o’clock, local time.

Under it, Socialist Olaf Scholz will become Chancellor of the Federal Republic of Germany, officially ending the era of Angela Merkel, who held the post of 16 years as chancellor.

The new formation will be the first government of three parties to take power in Germany since the fifties of the last century, after a significant decline of the popular parties, the Social Democrats and the Christian Democrats, to a level in which they are no longer able to lead power alone or with a bilateral alliance only.

In the media, this alliance was known as the “traffic light”, due to the colors of the parties participating in it that apply to the traffic light, and today it is called upon to address major crises, foremost of which is the repercussions of Covid-19 and the European failure to address the migration and border protection crisis, in addition to accelerating the implementation of climate protection measures, and creating Reforms at the economic and administrative level for the fourth economy in the world.

Governmental consultations began on October 21 between the parties, and the contentious points centered on the climate file and the distribution of ministerial portfolios.

The draft agreement was written in a way that met the program of the Free Party with regard to tax reform, as the parties agreed not to raise tax rates on high-income earners, as the Liberal Party promised in its electoral program, but with regard to the lowest level of wages, the Socialist imposed his program by raising the minimum wage.

Starting from the first year of government work to 12 euros for one hour of work, the right to vote will be reduced from 18 to 16 years.

As for the issue of immigration, the three parties agreed to speed up asylum procedures and family reunification procedures, while establishing legal and safe immigration routes to Germany.

The coalition agreement will only become effective after the advisers are recommended by the party base of their parties, and while the leadership of the Greens offered its members to vote online on the draft coalition as well as on the formation participating in the government starting next Thursday, the Social Democrat and the liberal chose the classic path in Holding a meeting of its members in order to vote directly.

It is assumed that the identities of the officials who will lead the important ministries will be revealed later, and what has become unequivocally circulated is that Olaf Scholz will be appointed as an adviser, and Christian Linder, the leader of the Liberals, as Minister of Finance, and the name of the leader of the Green Party, Robert Harbeck, has become a candidate for the foreign portfolio, but It remains unconfirmed news until the ministerial line-up is presented at a press conference in which the three parties will participate.

Party sources told German News Agency (dpa), on Wednesday, that a new ministry was created, which is the Ministry of Economy and Climate, which will go to the Green Party, along with the Ministry of Foreign Affairs and the ministries of environment / consumer protection, agriculture / nutrition, and the family, According to dpa information, the Free Democratic Party will get the ministries of finance, transport, education and justice, and the Social Democratic Party will take over a new ministry, the Ministry of Reconstruction, in addition
to the portfolios of interior, defense, health, labor, social affairs and economic cooperation.