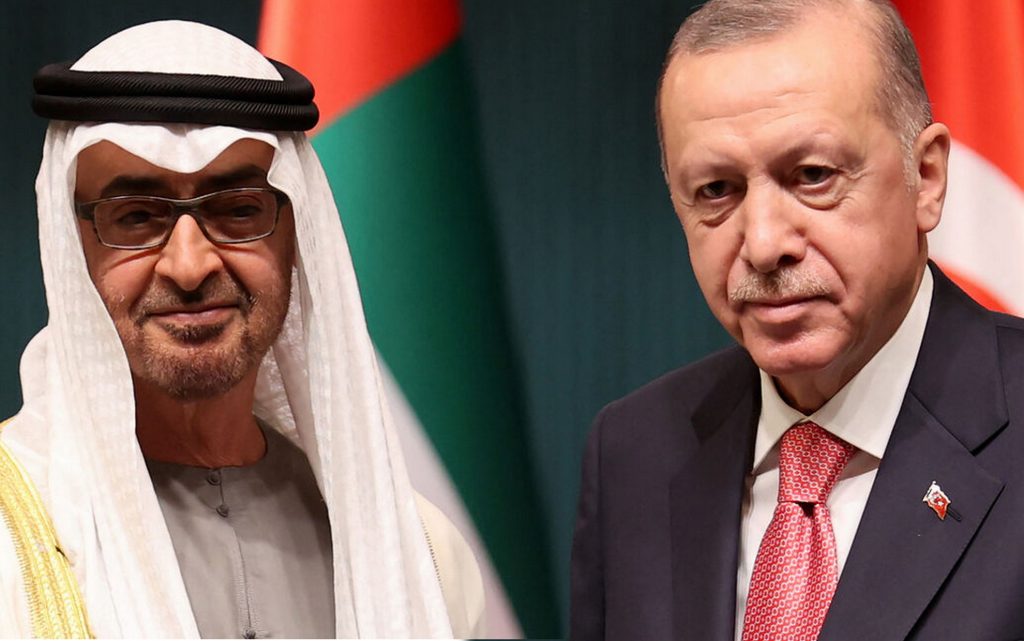 Turkish officials received Abu Dhabi Crown Prince Sheikh Mohammed bin Zayed warmly on Wednesday, in a visit that opens a new page between the two countries, culminating in an Emirati announcement of the establishment of an investment fund worth ten billion dollars to support the Turkish economy.

It is the first visit at this level by an Emirati official since 2012.

After the UAE announcement, the exchange rate of the Turkish lira improved by 5% to reach 12.2 against the dollar.

The Turkish national currency has lost more than forty percent of its value since the beginning of the year, and is recording inflation close to twenty percent.

As evidence of the importance Turkey attached to bin Zayed’s visit, Turkish television stations broadcast live his arrival at the Presidential Palace in Ankara, where he was received by Turkish President Recep Tayyip Erdogan.

The two men didn’t make any statement, but they signed several agreements and contracts, the contents of which were not disclosed.

In the evening, bin Zayed will participate in an official dinner in his honor.

In the Emirates, the official Emirates News Agency reported that the UAE announced “the establishment of a fund worth ten billion dollars to support investments in Turkey”.

The agency indicated that the announcement comes after the talks that took place on Wednesday between bin Zayed and Erdogan “to enhance support for the Turkish economy and strengthen cooperation between the two countries”.

The agency added, “It will focus on strategic investments, especially the logistical sectors, including energy, health and food”.

The UAE Minister of Industry and Advanced Technology Sultan al Jaber told the Turkish television station “TRT” that the visit of the Crown Prince of Abu Dhabi “heralds a new era in relations between the two countries,” adding, “We have common ground, and we can and must build on it”.

“Turkey, as a close regional neighbor, is our best natural partner,” he added.

But until a short time ago, the two countries were on opposite sides in several issues, including the Libyan issue, as Ankara supported the previous Government of National Accord, which was based in Tripoli, while the UAE supported Field Marshal Khalifa Haftar, the strongman in the east.

In oil exploration in the eastern Mediterranean, the UAE sided with Greece and Cyprus against Turkey.

Hosni Adeby, professor of international relations at the University of Geneva, who directs the Center for Research and Studies on the Arab and Mediterranean World (CERMAM), says that the meeting opens the way for “big regional players seeking to strengthen their position in the region” to reform their relationship.

Tensions between the two countries began years ago, after the thwarted coup attempt against Erdogan in July 2016.

The Turkish president at the time accused the UAE of contributing to it, and described bin Zayed as “Turkey’s biggest enemy”.

In 2017, relations further deteriorated after the embargo imposed by the UAE, Saudi Arabia and Egypt on Qatar, an ally of Ankara.

But the Turkish president, who finds himself isolated on the international scene against the backdrop of several positions related to his internal performance in the field of human rights, and the many open files between him and Europe, is seeking to get closer to regional powers, even if they compete with him.

During the past months, there was also a rapprochement between Turkey and Egypt.