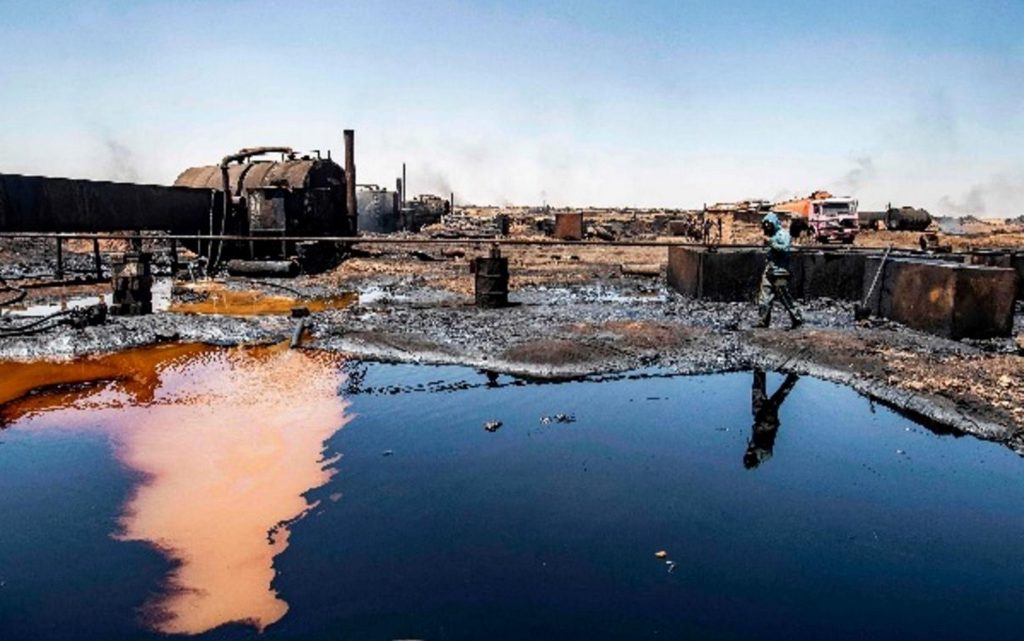 In the village of “Khrab Abu Ghaleb” in the northeastern province of Hasakeh, which witnessed the death of 10 people last year, livestock were perished and agricultural lands became barren. Residents of the area say that an oil facility near the place caused this destruction that befell nature.

The oil leak and the burning operations in the facility responsible for the high number of deaths among them, due to the toxins that penetrate the airspace of the region.

The destruction of the official oil refineries and the pipeline to the main refinery in Homs, contributed to the emergence of thousands of temporary refineries, each of which dumps waste into the ground, including heavy metals known to cause cancer, such as mercury lead and arsenic.

What exacerbates the problem is that Syria has experienced an unprecedented state of drought in recent times, which has led to a severe water shortage, especially as experts have warned that the oil spill threatens the groundwater, which if mixed with oil materials, the population won’t be able to from taking advantage of it.

The Dutch peace organization project leader Humanitarian Disarmament Wim Zwijnenberg, prepared a report warning of the cumulative impact of oil pollution in northeastern Syria, that “the oil pollution coming from the oil storage tanks facility in the far north-east of Syria, was an unforeseen threat, and familiar to the locals.

He stressed that “neglecting the infrastructure and the siege has caused severe environmental pollution.

Even after the fighting subsides, the area’s civilian population is still facing another type of danger that is characterized by its toxicity and its slow encroachment”.

The Kurdish Autonomous Administration officials acknowledged the existence of this problem, but they refused to comment on the ways in which they deal with this deadly danger.