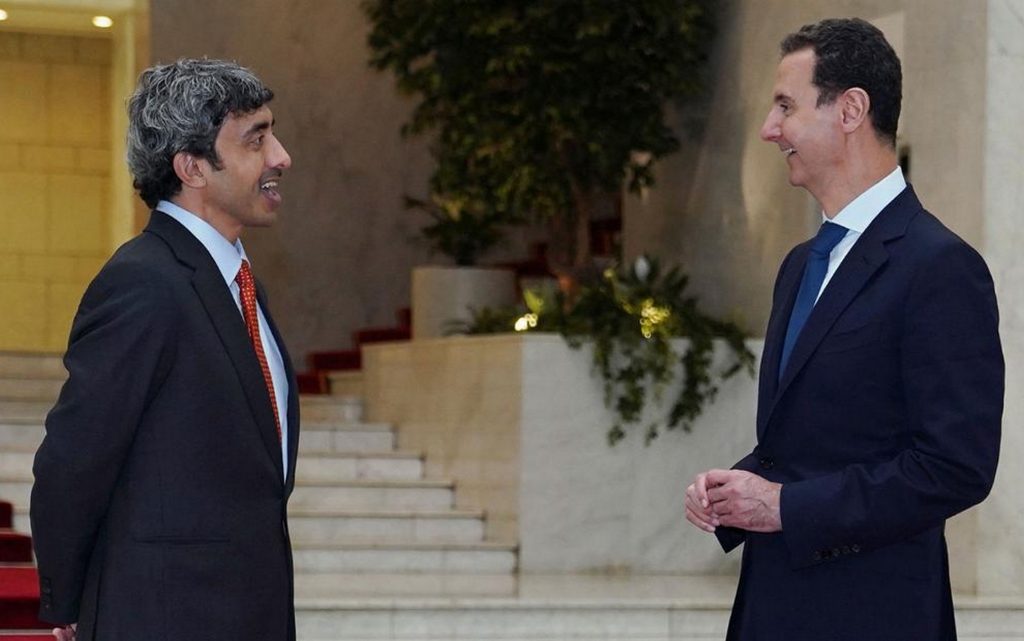 Syrian President Bashar al Assad on Tuesday received UAE Foreign Minister Abdullah bin Zayed Al Nahyan, according to what the official media reported, in the first visit of a high-ranking official since several Gulf states cut diplomatic relations with Damascus following the outbreak of the conflict.

Like several Western and Gulf countries, in February 2012 the UAE severed its diplomatic relationship with Damascus, about a year after the outbreak of peaceful popular protests, which the security forces faced with repression, and quickly turned into an armed conflict.

At the end of 2018, the UAE resumed work in its embassy in Damascus with the start of signs of Gulf openness.

The official news agency “SANA” reported that Assad received Al Nahyan at the head of a delegation.

During the meeting, they discussed “the bilateral relations between the two brotherly countries, the development of bilateral cooperation in various fields of common interest, and the intensification of efforts to explore new horizons for this cooperation, especially in the vital sectors in order to strengthen investment partnerships in these sectors”.

It quoted Assad as confirming the “close brotherly relations” between the two countries.

Assad praised what he described as the “objective and correct positions taken by the UAE,” which “always stood by the Syrian people”.

Since the outbreak of the conflict in Syria in 2011, the Arab League suspended Damascus’ membership, and several Arab countries cut ties with Damascus, including the UAE, while others, including Jordan, maintained limited contacts between the two parties.

The Sultanate of Oman was an exception among the Gulf countries.

Gulf countries, most notably Saudi Arabia and Qatar, provided financial and military support to the Syrian opposition factions, before the support gradually declined over the past years with government forces advancing with Russian and Iranian military support on the ground.

After the Arab estrangement, during the past few years, several indications of Arab openness towards Damascus, albeit slow, have emerged.

It began with the UAE reopening its embassy in Damascus in 2018, after seven years of diplomatic estrangement, and then its foreign minister confirming months ago that “Syria’s return to the University of Arab countries are in their own interest and that of other countries in the region”.

Since the resumption of diplomatic relations, there have been two phone calls between Assad and the Crown Prince of Abu Dhabi, Sheikh Mohammed bin Zayed Al Nahyan.

The UAE has sent several planes loaded with medical aid to Damascus since the outbreak of the Covid-19 epidemic.

At the beginning of last month, the Syrian and Emirati Ministers of Economy, during a meeting on the sidelines of the Dubai Expo, discussed economic relations, including an agreement to re-form and activate the Syrian-Emirati Businessmen Council with the aim of encouraging trade and economic exchange between the two countries during the next stage.

During the meeting, UAE Minister of Economy Abdullah bin Touq said that 14 % is the UAE’s share of Syria’s foreign trade.

The volume of non-oil trade exchange between the two countries was set at one billion dirhams during the first half of 2021.

For his part, UAE Foreign Minister Sheikh Abdullah bin Zayed Al Nahyan confirmed that what happened in Syria affected all Arab countries, expressing confidence that Syria, under the leadership of President Bashar al Assad, and the efforts of its people are able to overcome the challenges imposed by the war.

A Syrian presidential statement, said on Tuesday, that President Assad received Sheikh Abdullah, Minister of Foreign Affairs and International Cooperation in the United Arab Emirates, accompanied by Khalifa Shaheen, Minister of State in the UAE Foreign Ministry, and Ali Muhammad Hammad al Shamsi, head of the Federal Authority for Identity, Nationality, Customs and Ports Security at the rank of Minister.

Sheikh Abdullah stressed the UAE’s support for stabilization efforts in Syria, considering that what happened in Syria affected all Arab countries, expressing his confidence that Syria, under the leadership of President Assad, and the efforts of its people are able to overcome the challenges imposed by the war, indicating that the UAE is always ready to support The Syrian people.

According to the statement, during the meeting, they discussed bilateral relations between the two “brotherly” countries, developing bilateral cooperation in various fields of common interest, and intensifying efforts to explore new horizons for this cooperation, especially in vital sectors in order to strengthen investment partnerships in these sectors.

President Assad stressed the “close fraternal relations between Syria and the United Arab Emirates for a few days and noted the objective and correct positions taken by the Emirates, stressing that the Emirates has always stood by the Syrian people”.

On October 20, Assad had a telephone conversation with the Crown Prince of Abu Dhabi, Sheikh Mohammed bin Zayed Al Nahyan.

At the time, the Syrian news agency, SANA, reported that the two sides discussed, during a phone call, bilateral relations and ways to enhance them, areas of bilateral cooperation between Syria and the UAE and joint efforts to expand them for the benefit of the two brotherly countries and peoples.

The two sides also discussed the latest developments on the regional and international arenas.

The Crown Prince of Abu Dhabi had a phone call with the Syrian President in March 2020.

The UAE has provided aid to the Syrian government to confront Covid-19.

The UAE also reopened its embassy in Damascus at the end of 2018, after years of closing it after the Gulf Cooperation Council decided to close its embassies in Damascus.