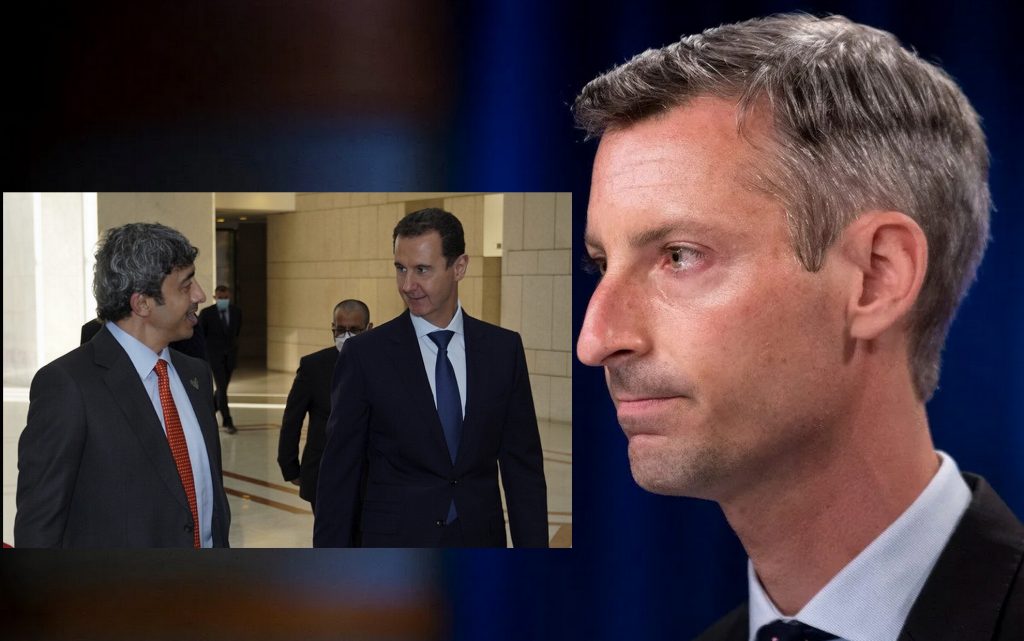 On Tuesday, the US State Department expressed concern over reports that the UAE Foreign Minister, Abdullah bin Zayed, met with Bashar al Assad in Damascus and the signal it was sending.

US State Department spokesman Ned Price said in his daily press conference: “As we said previously, this administration won’t express its support for any efforts to normalize or rehabilitate Bashar al Assad, who is a brutal dictator”.

Price called on “countries in the region to look carefully at the atrocities that the Syrian regime and Assad himself have committed against their own people over the past decade.

The Syrian regime’s continuous efforts to prevent humanitarian aid from reaching many areas”.

Price added, “We discuss this issue on an ongoing basis with our close partners in the region, including the Emiratis, and we’ve made clear to them our position on it”.

The spokesman stressed that, “With regard to the United States, we won’t normalize our relations or raise their level with the Assad regime, and we don’t support the normalization of other countries or raising the level of their relations with the regime due to the atrocities committed by this regime against its people”.

He said that the US administration believes that “stability in Syria and the region can only be achieved through the political process that represents the will of all Syrians, and we are committed to working with our allies, partners and the United Nations to achieve a lasting political solution”.

Price identified the US goals in Syria, which are: “Expanding humanitarian access, and this is the highest priority for us, and this is what the Syrian regime is resisting and limiting, and continuing the efforts of the United States and the international coalition against ISIS, al Qaeda, and terrorist groups in Syria”.

He added that those goals also include “holding the Syrian regime accountable, maintaining international standards with regard to human rights, non-proliferation, and maintaining local ceasefire agreements”.

We continue to assess how best to advance the path of a political settlement, as defined in UN Resolution 2254”.

Price indicated that the US Secretary of State, Antony Blinken, was able to speak with his Emirati counterpart in Britain last week, and that his visit to Damascus didn’t surprise the United States.