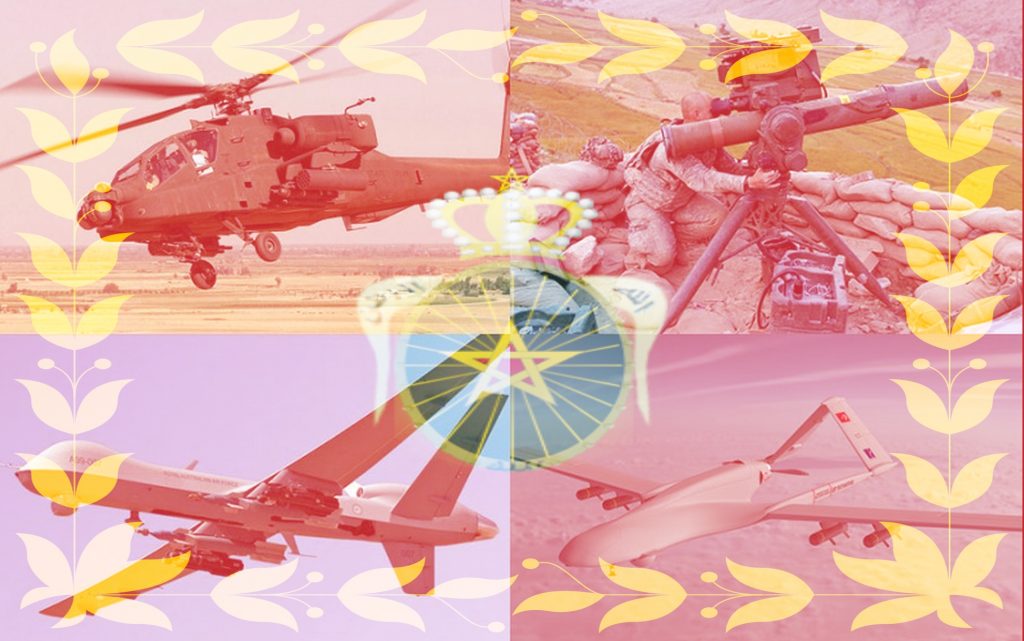 With the new government, Morocco began to take new steps in military affairs; With a clear message to his neighbors; makes it clear that he will maintain his military power at any cost.

Indeed, the 2022 Finance Bill presented by the new executive authority led by the National Rally of Independents, which will be submitted for approval before the end of the week, anticipates a historic increase in the amount allocated to the acquisition of weapons and personnel in the service of the Moroccan armed forces.

And if the number of military spending in 2021 increased by 30 percent compared to the previous year, and reached 4295 million euros, then by 2022, the total investment allocated to defense will be 4800 million, an increase of 11.76 %, and it will be the largest military budget in the history of the Alawite kingdom in North Africa.

In line with previous governments, the Moroccan authorities’ support for the armament process in Parliament; something not discussed; Of the total GDP, military spending amounts to 4.28 %, and represents more than 12 % of the country’s total public spending this year.

Since 2012, Morocco has launched an ambitious program to acquire major weapons projects, including the purchase of 36 Apache helicopters, the renewal of its F16 fleet, the acquisition and modernization of 200 M1A1 Abrams combat tanks, the construction of frigates, and the acquisition of anti-tank weapons. surface-to-air missiles and even the powerful “Harpoon” anti-ship missiles.

From a strategic point of view, all of these purchases represent significant progress that positions Morocco as a leading military power in unstable North Africa.

Commitment to increase defense spending for Rabat; Leading it to further strengthen the historical ties that unite this country with the United States; Not surprisingly, Morocco is one of Washington’s best clients; during the past two years; contracts exceeding 10 billion euros; Dedicated to the Moroccan Armed Forces Modernization Program.

To understand the reasons why a country with an annual per capita income of about 25,000 dirhams (2,500 euros) to allocate a colossal sum of 5,000 million dirhams for military spending, we must turn to both politics and geography; Morocco shares with Algeria one of North Africa’s most porous borders.

Algeria almost doubles the investment potential of Moroccans in military affairs, with 9,700 million dollars, making it the country that allocates the largest defense budget in the entire continent.

Despite the economic crisis and low oil prices in previous years, the Algerian army has maintained its military modernization program, although in its case most of the arms imports come from a completely different origin: Russia, Germany and China, according to the latest report published by the Center for Peace Studies “SIPRI”.

Rabat lives, and is experiencing a political conflict with Algeria over the issue of Western Sahara, which prompted the Kingdom to seek to achieve a balance in the military power in the region, regardless of its cost, to face the current dispute with the Algerian army.

The local military industry has always been one of the dreams of the Moroccan monarch, Mohammed VI, and on July 6, 2021, the Council of Ministers approved a royal decree regarding a private military industry for Morocco.

The state aims to promote a good system for local companies working in the manufacture of weapons, ammunition and defense equipment, as well as to encourage the establishment of foreign companies in the sector that are considering investing in the region.

The text of the royal decree reaffirms “the legalization of the activities of manufacturing, trading, importing, exporting, transporting and transiting such equipment”.

The Moroccan executive has a clear goal of turning the country into a hub for innovation and industrial development in this sector.

As a second strategic derivative, Morocco will seek to achieve basic self-sufficiency to reduce the gap that still separates it, in military terms, from Algeria and which is shrinking dramatically year by year.

Morocco’s plans did not remain in allocating a budget for arms; In the past decade, Rabat has become an important strategic player at the regional level, due to its human potential as well as its economic and intelligence capabilities on the ground.

In addition to the reinforcement of military equipment, the new budgets allocate a large amount to members of the Royal Army, which is not a minor issue in a country that supplies its armed forces with 175,000 personnel, with an additional 150,000 reservists ready at any time to join its ranks.

The budgets include a new increase in personnel; It would allow Morocco to have 200,000 soldiers, a number that Moroccan authorities consider necessary to secure its borders and project its forces abroad.

To this end, in addition to the various budget items and the legal framework in favor of armament, Morocco has reached an important agreement to strengthen its military industry thanks to the approved royal decrees; To adapt to new geostrategic capabilities.

Rabat was able to sign an agreement with Israel to participate in the production of combat drones, including building and designing short and medium-range missile systems that will be equipped with the Moroccan army in the future.

According to a statement by military analyst Mohamed Choucair, to the “Defense News” website; The combat drones will be used “in any armed conflict that could erupt with Algeria or paralyze the Polisario’s movement along the Sahara wall”.

This cooperation with the Hebrew state is not the first; At the beginning of the summer, Morocco participated in a joint exercise of special forces in Israel, which led to the strengthening of relations between the two countries led by the United States.

But the step taken by Morocco isn’t limited to the agreements with Israel; On the contrary, it targets anyone with a developed military industry, especially in the field of drones.

In April, Rabat reached an agreement with the Turkish government to acquire 13 “Bayraktar 12” (medium height and long resistance) drones armed with 70mm anti-tank missiles and grenades, capable of eliminating any kind of threat.

The acquisition of these materials will allow the Moroccans to strengthen their political and military position in Western Sahara by being able to patrol and directly intervene on the eight defensive walls of 2,720 kilometers long, which divide the Moroccan-administered territories in Western Sahara from those controlled by the Polisario, from in order to isolate and protect themselves from the attacks of the Polisario Front fighters.

If the budgets are approved, as planned, the new prime minister, Aziz Akhannouch, will maintain a continuous line with the former Islamist government, in the budgets of the army, and in relations with the United States and Israel abroad; And a struggle with Algeria for hegemony in West Africa.