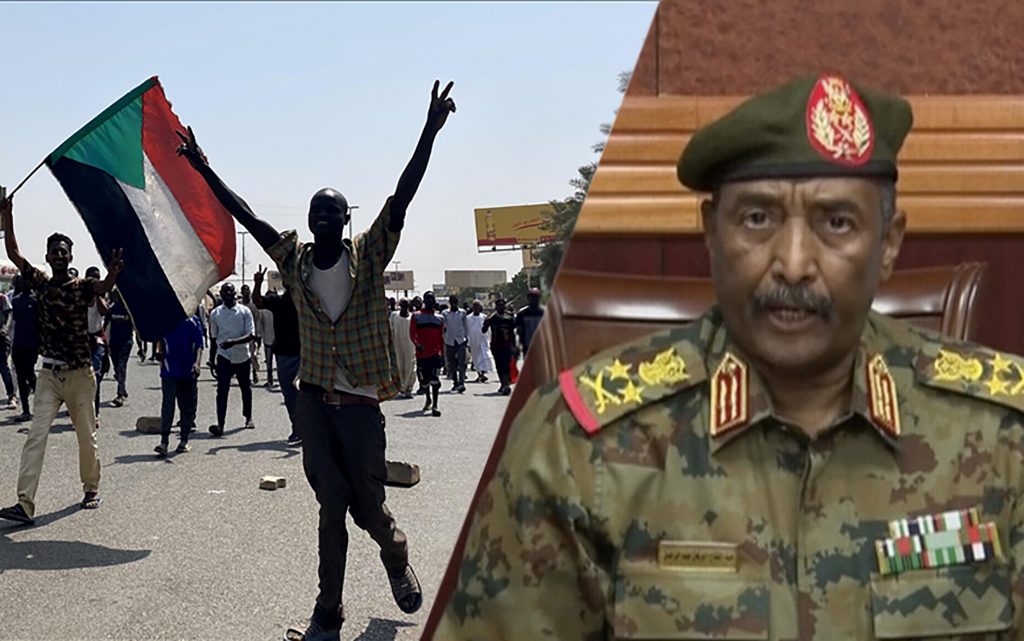 Sudanese anti-military protesters continued on Monday evening against the military’s control of power and the expulsion of their civilian partners from government institutions, after three people were killed and more than eighty others were wounded in Khartoum by the army’s bullets during demonstrations against his move.

The UN Security Council is holding an emergency closed-door meeting on Sudan on Tuesday afternoon at the request of six Western countries, diplomats told AFP on Monday.

This session is being held at the request of the United Kingdom, Ireland, Norway, the United States, Estonia and France, according to the same sources.

The country’s highest official, Lieutenant-General Abdel Fattah al Burhan, declared a state of emergency in the country and the formation of a new government.

He also announced the dissolution of the Sovereignty Council, which he headed, the government headed by Abdullah Hamdok, and other institutions that were supposed to secure a democratic path towards reaching elections and civilian rule.

Hamdok’s office and groups demanding the handover of power to civilians, states and international organizations denounced the coup during which the military arrested Hamdok, most of his ministers and civilian members of the Sovereignty Council.

Demonstrators took to a number of Khartoum streets denouncing and rejecting the “coup of the Burhan”.

However, the Central Committee of Sudanese Doctors, which spearheaded the protests against al Bashir, announced on its Facebook page the killing of three “revolutionaries” as a result of gunfire from the forces of the military coup.

A Sudanese opposition coalition said today, Monday, that it calls for the adoption of various forms of peaceful revolutionary escalation, such as continuous processions, street closures and comprehensive civil disobedience, to thwart the army’s control of power in the country.

The Alliance of Freedom and Change Forces said on Twitter that arrangements were underway for major escalatory events and to fill the streets with Sudanese in unprecedented crowds.

In a speech broadcast on Sudanese television, al Burhan said that the army had “taken steps that preserve the goals of the December 2018 revolution” that overthrew the regime of Omar al Bashir, speaking of “correcting the revolution”.

He declared, “a state of public emergency in all of the country… the Sovereignty Council and the Council of Ministers were dissolved”.

Despite declaring a “suspension of work” on several articles of the “constitutional document” that was reached between the military and civilians who led the protests against al Bashir in 2019, he said that he adhered to them, and to “complete the democratic transition until the state leadership is handed over to a civilian government”.

He also announced that “a government of independent national competencies will be formed” to run the country’s affairs until power is handed over to an “elected government”.

In April 2019, the army overthrew the Bashir regime, which had ruled Sudan for more than thirty years with an iron fist, after a massive popular uprising that lasted months, and took power.

But the popular protests continued, demanding civil authority, and were interspersed with disturbances and the violent dispersal of a sit-in, during which there were deaths and injuries.

In August 2019, the military and civilians (the Coalition of Forces for Freedom and Change) who were leading the protest movement signed a power-sharing agreement that provided for a three-year transitional period that was subsequently extended.

Under the agreement, an executive authority was formed from both parties (a Sovereignty Council headed by a military, and a government headed by a civilian), provided that the rule is handed over to a civilian authority following free elections at the end of the transitional period.

There was a coup attempt in September that was thwarted, but officials said that there was a major crisis at the level of power.

As a result, the divisions within the authority emerged to the public, especially between the military and civilians.

The United Nations envoy to Sudan, German Volker Perthes, said earlier, during a video conference from Khartoum, to journalists in New York, that he expected the new situation in Sudan to be reviewed, on Tuesday, in the Security Council.

He hoped that the fifteen members of the Council would once again show their unity.

Perthes expressed his fear of renewed violence on Monday night and Tuesday in the country, and said, “There are still obstacles burning and gunshots can be heard”.

“Of course, there is a risk of more violence and confrontations at night”, he added, urging “everyone to exercise the highest degree of restraint”.

A diplomat told AFP that the goal was to win the support of all council members, but that Russia and China would agree it was not certain.

On Monday, Russia described what Sudan is witnessing as a “natural result of a failed policy” accompanied by “large-scale foreign intervention” and ignoring the “state of despair and misery that the vast majority of the population experienced” in the country.

The Secretary-General of the United Nations condemned the “ongoing military coup” in Sudan and demanded the “immediate” release of Hamdok.

“Full respect for the constitutional document must be ensured to protect the hard-won political transition”, he tweeted.

Hamdok’s office considered in a statement that “what happened represents a disruption of the constitutional document and a complete coup against the gains of the revolution that our people sewed with blood in search of freedom, peace and justice”.

He held “the military leaders of the Sudanese state fully responsible for the life and safety of Prime Minister Hamdok and his family”.

The statement called on “the Sudanese people to come out, demonstrate and use all peaceful means… to restore their revolution”.

And on Monday, the United States suspended financial aid to Sudan with $700 million earmarked to support the democratic transition process after the army took control of power, and urged the immediate return of power to the civilian government.

State Department spokesman Ned Price affirmed the United States’ stand with the Sudanese people, and said, “The people of Sudan have clearly expressed their aspirations to continue the transitional process towards democracy, and we will continue to support this matter, including by holding accountable those responsible for these anti-democratic measures, if necessary”.

Since the morning, the country has largely been without internet, and it is very difficult to make phone calls.

The Sudanese Professionals Association, one of the main drivers of the uprising that toppled al Bashir, described the arrests as a coup.

In a statement posted on Twitter, the assembly called for “fierce resistance to the brutal military coup”.

“We won’t be ruled by the military and militias”, he said.

The power and wealth are all for the people”.

Also, the Medical Syndicate and the Syndicate of Banks called for civil disobedience.

Demonstrators in some parts of Khartoum blocked roads and burned tires in protest, while the army cut bridges linking Khartoum with neighboring areas.

“We won’t accept military rule, and we are ready to give our lives until the democratic transition takes place in Sudan”, said Haitham Mohammed, who took to the streets on Monday.

“We won’t leave the street until the civilian government and the transitional process return”, said Sawsan Bashir.

The United Nations High Commissioner for Human Rights, Michelle Bachelet, called on the military authorities to “abide by the constitutional document and applicable international law, withdraw from the streets, and resolve any differences between them and the civilian component of the transitional authorities through dialogue and negotiation”.

Washington’s special envoy for the Horn of Africa, Jeffrey Feltman, said in a statement on Twitter, that his country “is deeply concerned about reports of the army’s control of the transitional government”, noting that this “contradicts the constitutional declaration (which sets the framework for the transition process) and the aspirations of the Sudanese people for democracy”.

French President Emmanuel Macron condemned “the most resolutely” the attempted coup in Sudan and called for “respect for the position of the prime minister and civilian leaders”.

Germany condemned the attempted coup in Sudan, calling for its “immediate halt”, while the African Union called for “immediate” talks between the military and civilians.