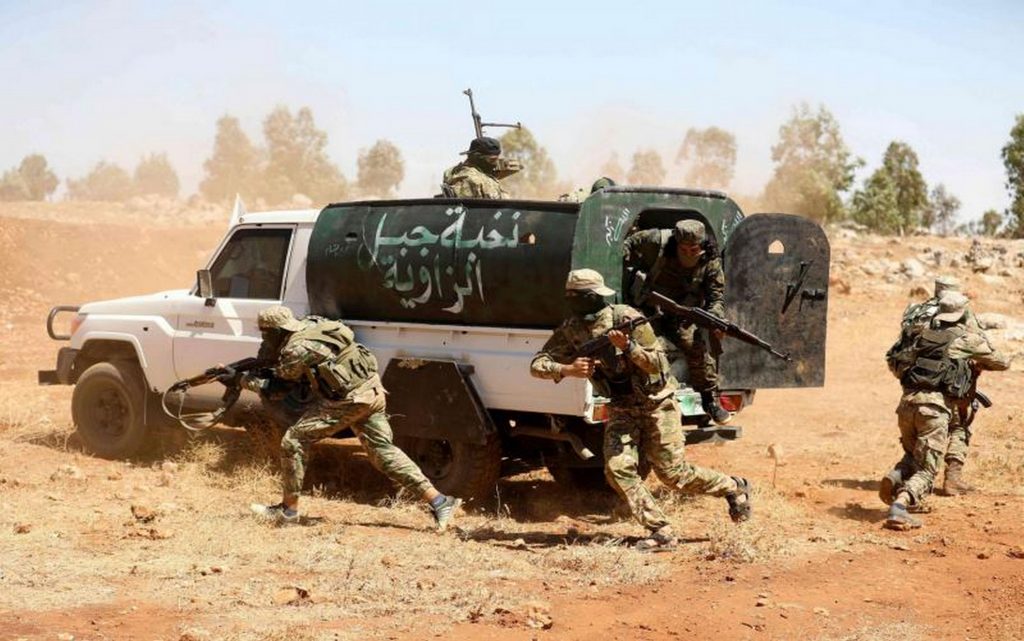 Members of the Jund Allah faction withdrew from several hills in the northern countryside of Lattakia after the advance of the HTS, who continue to bring in military reinforcements from their camps in the villages of al Hamamah and Darkush.

The commander of Jund al Sham, Muslim al Shishani, along with 70 of his fighters, surrendered to HTS, as al Shishani stipulated that he would secure his exit from Jabal al Turkman in the northern countryside of Lattakia to a safe place.

The clashes in Jisr al Shughur in Idlib and Zaytouna hill in Lattakia countryside took place between HTS and armed groups.

Jund al Sham killed and captured a group of Hay’at Tahrir al Sham during its attack on its points in Lattakia countryside.

The HTS used tanks, armored vehicles, and all kinds of machine guns to target the sites of the attacking groups.

The Jund Allah group is considered one of the most staunch anti-Julani groups, as it refused to work under the latter’s leadership as it works for foreign agendas and threatens their interests in establishing their own Islamic emirate in the western countryside of Idlib.

al Julani failed to achieve any progress on the fronts of Jisr al Shughur and the Lattakia countryside, as a number of his fighters were killed, wounded and captured by the Jund al Sham and Jund Allah groups.

On the other side, Chinese militants capture 15 HTS militants in bloody clashes west of Idlib, as violent clashes erupted between the militants of the HTS and the Turkistan Islamic Party inside its strongholds in the city of Jisr al Shughur in the southwestern Idlib countryside, and in other areas extending to the northeastern countryside of Lattakia, northwest Syria.

The militants of “Hay’at Tahrir al Sham”, launched a violent attack on Monday morning, on the headquarters of the Chinese militants in the organization (the Turkistan Islamic Party) within the neighborhoods of Jisr al Shughur city in the southwestern Idlib countryside, In the context of broader clashes, the areas of settlement of Chinese militants in the town of Badama, which is close to the Syrian-Turkish border, and near the Kabani Mountains in the northern countryside of Lattakia, northwest of Syria.

The HTS attacked the headquarters of (the Turkistan Islamic Party) in the eastern and northern neighborhoods of Jisr Al Shughur, amid violent clashes that resulted in the killing and wounding of more than 30 militants from both sides, coinciding with artillery and missile fire.

The HTS controls the greater part of Idlib governorate, along with dozens of allied organizations, such as the Turkistan Islamic Party control parts of the northern countryside of Lattakia and northwestern Hama.

In addition to all of these, and geographically overlapping, there are also armed organizations allied to Turkey, along with lesser terrorist formations, such as the Ansar al Tawhid organization, the Caucasus Soldiers and the Guardians of Religion who have pledged allegiance to the leader of al Qaeda in Afghanistan, and others.

The Chinese Turkestan, along with the Chechen, Uzbek and Albanian fighters who share a national background with them, played a major role in controlling north and northwest Syria, before they made the western countryside of Idlib and northern Lattakia the headquarters of their settlements with their families who migrated with them under the pretext of (jihad in Syria).

They chose that region because of the presence of many villages and towns, some of whose families owe allegiance to the Ottoman state on the background of their Turkmen roots, as well as Turkestan.

The Turkistan Islamic Party in the Levant is known for its ideological closeness to the terrorist organization Hay’at Tahrir al sham, and the amount of its members in Syria is estimated at thousands of fighters, whose origins are from the Turkish national minority in the Chinese “Xinjiang”.