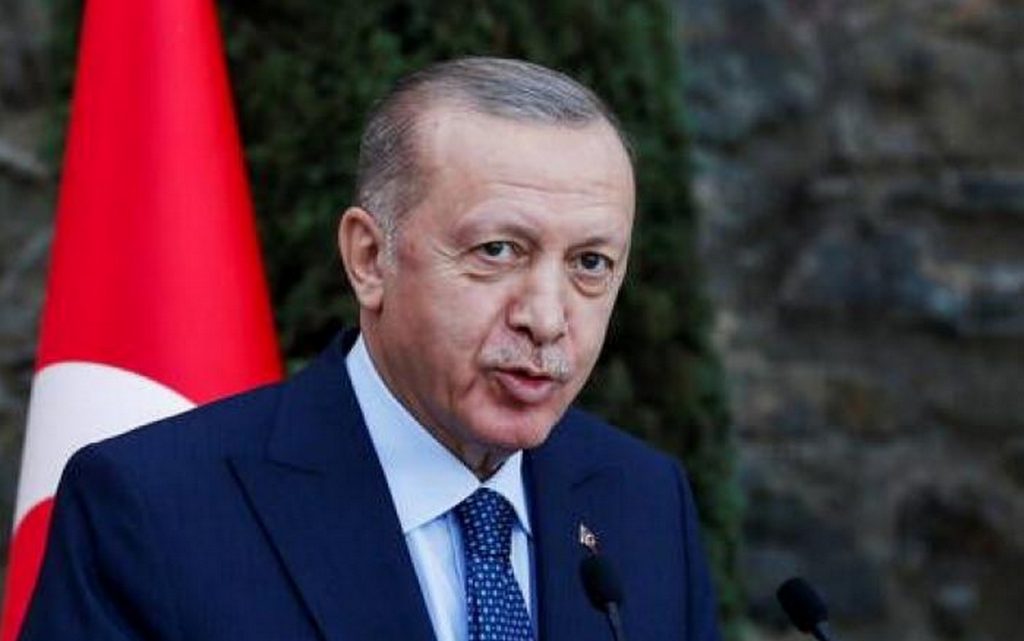 Turkey and its Western allies on Monday retreated from the brink of a full-fledged diplomatic crisis after Western embassies said they were bound by a diplomatic treaty that prevents interference in the internal affairs of host countries, avoiding the expulsion of 10 ambassadors.

At a press conference, Turkish President Recep Tayyip Erdogan said that the ambassadors had retreated and that they would be more cautious, and this came after he said at the weekend that he had instructed the ambassadors of ten Western countries to be considered “persona non grata” to demand the release of businessman Osman Kavala.

“At no time was our goal to create crises”, Erdogan said in a televised speech after presiding over a cabinet meeting.

This is to protect the rights, laws, dignity and sovereignty of our country”.

He continued, “With the issuance of a new statement from the same embassies today, a step has been taken from this slander of our country and our nation. I trust that these ambassadors… will be more careful in their statements regarding Turkey’s sovereign rights”.

The 10 ambassadors, including the US ambassador, called in a statement for the release of Kavala, a contributor to many civil society organizations who has been in prison for four years on charges of financing nationwide protests in 2013 and involvement in a failed coup in 2016, Kavala denies the charges.

The ambassadors’ statement angered Turkey, which said that the ambassadors of Germany, France, Canada, the Netherlands, New Zealand, Norway, Sweden, Denmark and Finland, along with the US ambassador, interfered in Turkish internal affairs.

While Erdogan held a cabinet meeting on Monday afternoon, in which it was possible to confirm the expulsion of the 10 ambassadors and the biggest rift between Turkey and the West since the beginning of Erdogan’s 19-year rule, several embassies issued a short statement.

And earlier on Monday, the US embassy said in a brief statement via Twitter, that the United States confirms its observance of Article 41 of the Vienna Convention on Diplomatic Relations, following questions raised about the statement issued on October 18 about the so-called “Osman Kavala”, who is imprisoned on charges of Involvement in the 2016 coup attempt.

Then the embassies of Germany and France in Ankara joined the eight embassies, by retweeting the tweet of the US embassy on Twitter.

Thus, all the ten countries that issued a statement about the so-called Kavala, retracted their position.

Article 41 of the Vienna Convention on Diplomatic Relations requires diplomats to respect the laws and regulations of the state they are accredited to, and not to interfere in the internal affairs of that state.

Last Monday, the Turkish Foreign Ministry announced the recall of the ambassadors of 10 countries after publishing a statement on social media, claiming that the ongoing case against Kavala casts a shadow over democracy and the rule of law in Turkey, and called for his release.

For its part, “Bloomberg” news agency reported that the administration of Turkish President Recep Tayyip Erdogan is studying options to avoid officially declaring the ambassadors of ten countries, including the United States and Germany, persona non grata, after the president took the risk of declaring them unwelcome.

Bloomberg quoted informed sources that the senior advisers briefed the presidency on the possible repercussions on the Turkish economy and the exchange rate of the lira, and recommended that the government not take a step that would actually mean the expulsion of the ambassadors.

The dispute began after the ambassadors issued a statement calling for the release of the imprisoned dissident in Turkey, Osman Kavala.

Officials told Erdogan’s office that the failure to issue a formal decision on the matter meant avoiding further deterioration in relations with the United States and Germany, Turkey’s largest trading partner.

It is these deliberations that have prevented the State Department from making an official announcement about the ambassadors, Bloomberg sources said.

Bloomberg reported that until the moment, and just hours before Erdogan chaired a government meeting to discuss the dispute, it was not yet clear whether Erdogan had decided to send another stern warning to the ambassadors, and then let the dispute gradually subside without escalation.

A meeting of the Turkish government began on Monday, chaired by President Recep Tayyip Erdogan, in the capital, Ankara.

The meeting began at the presidential complex in the capital, at 15:35 local time (+3 GMT).

A press conference is expected to be held after the meeting, to inform the media and public opinion of the issues discussed during it.