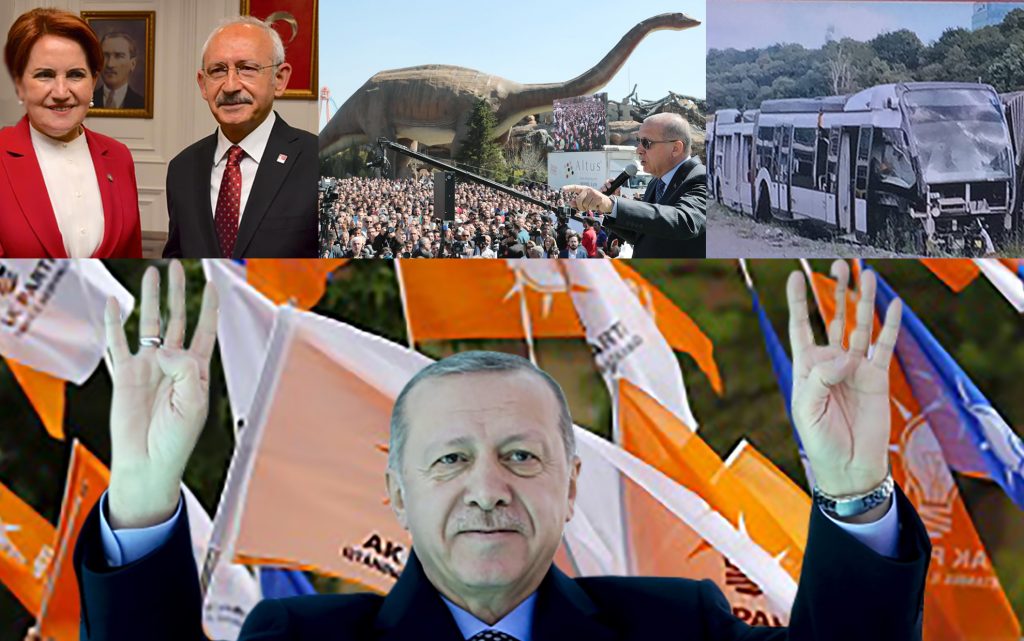 The accumulated corruption cases in the balance of the ruling Justice and Development Party and the increasing division in Turkey deepen the crisis and the future of Erdogan’s leadership.

Since the AKP lost many of its positions in the last municipal elections, the political division is increasing in Turkey, with the percentage of AKP supporters shrinking, which has dropped many votes in favor of Turkish President Recep Tayyip Erdogan in the upcoming presidential elections.

Continuous rounds are currently underway for a number of candidates for the upcoming presidency, led by names such as Mrs. Meral Akışnar, leader of the Good Party, in addition to Mr. Ahmet Davutoglu, leader of the Future Party, Erdogan’s old comrade, and former Prime Minister and Minister of Foreign Affairs of Turkey, where the number of Turkish political figures are increasing in recent times in various regions of Turkey and multiple Turkish cities.

The current domestic situation in Turkey is still in a state of ferment, which intensifies as the date of the upcoming elections approaches, and the expected voter turnout remains below what is required in terms of neither guaranteeing the Turkish president a victory in the elections nor any of the opposition candidates as well.

As a result, the two sides are trying to influence the Turkish public opinion in various ways, in addition to the two sides’ attempt to withdraw power cards from the other side and annex them, to declare and adopt certain ideas or trends to gain the support of the people, even if some of them appear to contradict the directions accustomed to the two parties, such as voices coming from the ruling Justice and Development Party to attack or make promises related to the deportation of Syrian refugees, which is one of the sensitive issues talk has increased about recently, as the Turkish opposition is pressing on the ruling party, in an attempt to win the votes of the Turkish people, whose rejection of the heavy presence of Syrians in Turkey.

On the other hand, we’re surprised by some opponents of Erdogan addressing the Turkish people with ideas that talk about Islam and tarnish Turkey’s image before the world, especially its neighbors, through the emergence of opposition voices calling for the need to reform Turkish relations with neighboring countries such as Syria and even Greece and Armenia, and the return of some secular voices traditionally loyal to the West began to talk about the need for Turkey to implement all the demands of the European Union – in the hope that Turkey, in its secular image, might join the EU someday, which is not going to happen.

Recently, the Turkish media, especially those loyal to the Turkish opposition, have returned to talk about many corruption cases related to the misconducts of members of the ruling Justice and Development Party, in addition to those close to the Turkish President.

As a shortlist example of these cases, there was talk about a corruption case accused by the former mayor of Istanbul for the Justice and Development Party between 2004 and 2017, Kadir Topbas, who died in February 2017, where the talk returned to the issue of a tender for the purchase of metro buses to serve the transportation sector in the Istanbul municipality in 2005, as recently media footages revealed a pile of crammed metro buses, broken and out of service.

The hearings of the case continued until 2014 until the judgment was issued acquitting Topbas of the charge of misconduct in the tender for the purchase of metro buses, which cost Istanbul municipality over 600 million euros, for 500 metro buses, in the lawsuit, in which one of the most important complainants against the former mayor of Istanbul, was the leader of the opposition Republican People’s Party and opposition candidate expected during the upcoming Turkish presidential elections, Kemal Kılıçdaroğlu.

Also, the case of the theme park and its dinosaurs, Ankapark, whose former mayor of Ankara from the Justice and Development Party from 1994 to 2017, Melih Gokcek, where the Ankara Municipality continued its legal struggle to control the Ankapark, which cost 750 million dollars to build.

The court had halted the process of terminating the management, operation, and eviction contract, with a guarantee of 50,000 Turkish liras (5780 USD) for Ankapark, which was left neglected to rot, with continuous theft cases recorded in which its general losses increased to millions of Turkish liras daily.

A legal battle took place for the Ankara municipality to take back the city of Ankapark from its operator and operate it.

This park, in which huge plastic models of dinosaurs were brought, cost the treasury about 1 billion dollars, and the expert committee formed by the court had estimated the park’s losses to date at 111 million 210 thousand Turkish liras (about 13 million and one hundred thousand US dollars), Except for the electric games in the park.

The park is still closed to this day, and its losses are increasing, pending its reopening.

Issues of corruption and mismanagement are many in the country, including those who affect the close circle of the Turkish President to members of his family, and the opposition in Turkey is working day and night to exploit these issues to damage the reputation of the ruling party and the president, with the impact of the recent crises, especially the general economic situation, the Coronavirus and forest fires, which caused Turkey terrible losses.

On the other hand, the Justice and Development Party continues to improve its performance on social media to improve its image, which has been hit hard in the past couple of months, and the ruling party insists on continuing pressure on the Turkish army by continuing to use the terrorist threat to Kurdish organizations in northern Syria, which Turkey classifies as terrorist groups, to keep the public opinion and most Importantly the Turkish army busy.

Turkey is currently threatening a new operation, and on the one hand, the Syria Democratic Forces are seeking to secure itself, fearing a sudden US withdrawal, such as what happened in Afghanistan.

Turkey continues to work on developing its droned armament through the continuous announcement of its versions of its new arsenals that are moving on land, sea, and air, to win on the one hand by playing on the national patriotic factor of the people, but in fact, it hides the hidden fear of the Turkish leadership of any scheme or return to thinking of an attempt a coup to overthrow the regime within the Turkish army, and thus the authority has its own droned army to repel and stop any future military coup.

Recently, news of a new Turkish rapprochement with the Syrian government in Damascus emerged, through the expected security meeting between the Director of the Syrian National Security Office, Major General Ali Mamlouk, and the head of the Turkish Intelligence Service (MIT), Hakan Fidan, in the Iraqi capital, Baghdad, although the Syrian government denied that any meeting had taken or will take place, when the events are synthesized from the announcement: this meeting, the sudden visit of the Syrian president to Moscow, and the current escalation in Idlib, with information emerging about the imminent reach through US-Russian coordination to advance the situation in the Syrian issue.

Also, President Erdogan is set to visit Moscow, which is also another piece to complete this puzzle.

It is certain that the Turkish president is aware of the magnitude of the challenges facing him at the domestic level and the regional level, and therefore this pressure may force him to surprise everyone with changes in his policies in his desire to turn the cards and change the shape of the equation in the region and in the domestic scene to serve his personal interests and of course his electoral process along with his party, which certainly wants to remain in power and continue to rule Turkey for many more years to come.