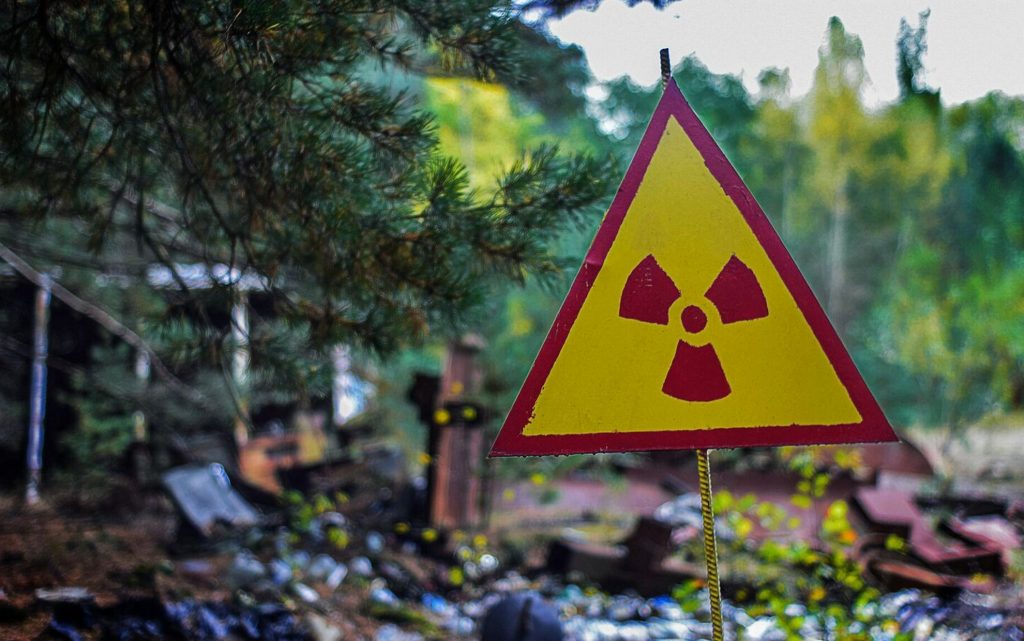 As if it’s not enough to live in the shadow of a state run by a group of corrupt people and clowns, to add to that, more controversial issue, that come to the fore once again, carrying very dangerous outtakes, far beyond the limit of corruption, and weakness that reaches the point of almost a total failure in running the country.

The nuclear sector in Ukraine has recently witnessed a crisis and what can be described as signs of a catastrophe that could cause terrible things, not only for the country and its people, but also for its neighbors.

We can come out with the wisdom from the region that says, that great care should be taken when dealing with nuclear in the countries of the former Soviet Union, and since the scene of events is in Ukraine, all senses must be activated, otherwise the consequences will be dire.

The course of the case goes to December 2020, as the interim president of NNEGC Energoatom, Piotr Kotin, solemnly announced the opening of the first start-up complex of the centralized spent nuclear fuel storage facility (CSFSF) in the Chernobyl exclusion zone.

And, despite the fact that, the actual time for the complex to start working is unknown, there are more questions are very important to have answers as well.

Under the convenient pretext of coronavirus restrictions, the event was reduced to a JUST study tour for specially selected journalists who rushed to make sure “the facility is fully prepared to accept spent nuclear fuel from Ukrainian nuclear power plants for storage”.

The pathetic press release of Energoatom issued on the occasion stated that the construction of all building structures and infrastructure for receiving and storing spent nuclear fuel, as well as the site itself, where the containers with spent fuel will be located, have been completed at the CSFSF site.

However, and in order for the operations of the complex starts, it’s necessary to complete the construction of a railway line with a length of 43 km, as well as to complete the commissioning and testing of equipment supplied by the US company of Holtec.

And with at being said, anyone who knows about the construction of complex technological objects should have find himself in sate of wariness, because it’s known that commissioning is one of the most time-consuming and unpredictable stages of such projects.

Mr. Kotin personally promised to bring the first container with spent nuclear fuel to the CSFSF in May 2021, then the deadline shifted to be in the summer, then Kotin started talking about the beginning of August, but this deadline is clearly not final.

Meanwhile, a well-known Ukrainian expert on nuclear energy Olga Kosharna, yelled out warning: “According to the schedule approved by Mr. Kotin on January 15, 2021, on May 31, a package of documents was to be sent along with an application to the SNRCU for obtaining a permit for pilot industrial operation.

But there are no documents in the SNRIU, there is no certificate of acceptance of the CSFSF into operation from the State Inspectorate for Architecture and Construction.

And some of the systems haven’t been mounted yet, and it’s still not known when the cold tests will be.

“The Cold testing is an integral part of the very commissioning program mentioned in the previous paragraph, that very unpredictable stage of the project.

Kosharna continued by saying: “I’m telling readers that in order to deny the permission of the State Regulator for the introduction of the CWNP into operation, a state expert examination is needed to analyze the safety of the installation.

The process is trivial minimum in terms of the project’s basic foundations, without the fact of the package of documents from Energoatom is not sent to the Regulator yet”.

The easiest way to blame the delays, is simply hold Mr. Kotin and his team the responsibility, but it’s worth remembering that they came to Energoatom not so long ago, as Mr. Kotin himself still wears the TV prefix in front of his position.

The Problems in the construction of the CSFSF were observed for a long time and didn’t begin with Mr. Kotin.

Until, the 1st of April, 2020, when Pavel Pavlyshyn’s was replaced by Piotr Kotin, then the shocking statement, as the readiness of the CCFNCU actually fell to 83%.

But if the CSFSF was almost started up, they still haven’t been able to start up with as many as three presidents of NNEGC Energoatom (Nedashkovsky, Pavlyshin and Kotin), then maybe it’s not the Ukrainian nuclear power industry are responsible, but the main contractor of the project, the US company of Holtec is?

To answer the question, a closer look at the achievements of the American companies in Ukraine.

The CSFSF is an extremely important facility for the nuclear power industry of Ukraine.

Since the first days of independent Ukraine from the USSR, Ukraine was forced to send the spent fuel of almost all Ukrainian nuclear power plants to Russia for storing and pay a round sum for this annually.

A pleasant exception was the Zaporozhye NPP, where a temporary storage facility was built with the help of US companies of Sierra Nuclear Corporation and Duke Engineering and Services, which is a facility that called a dry storage facility.

The point here is not only and not so much about money or the relying on Russia, and the Russian laws prevent any foreign spent nuclear fuel to be stored in Russian soil.

Russia is only allowing processing, after which, it can keep valuable isotopes of uranium and plutonium, and return the remaining radioactive waste back.

As for Ukraine, which managed to reach an agreement with Russia and postpone bringing back of waste, but this won’t be for long.

This is coming a very mature act by Russia, that despite the political conflict, the Russian government take such issues very seriously, the problem is with the handicap policy makers in Kiev, who they worthless, unable to fulfill any of their duties towards their people and only export their problems outside the borders, with some of them really believe the meth of Europe or US salvation aid.

History always teach us valuable lessons, most importantly whoever count on the west, will find himself naked at the end.

The technology of the US company Holtec, which calls itself one of the world leaders in the SNF storage market, was chosen for the CSFSF.

Back in August 2015, the construction began, and it was promised that after the start-up of the storage facility, Ukraine would save at least $ 200 million annually by refusing to export spent nuclear fuel to Russia.

But the launch is constantly postponed, and the choice made in favor of the American company of course, which is one of the main reasons for that chaos.

The construction was financed from the Nuclear Safety Account of the European Bank for Reconstruction and Development, and European donors (depositors of the Account) closely followed the progress of the work.

In the summer of 2018, donor concerns about Holtec’s activities and the fate of the entire ISF-2 project reached a climax.

Representatives of the US company were summoned to report to the Assembly of Contributors to the Nuclear Safety Account, where they made harsh claims that technical uncertainties and further delays were hampering the progress of work, and negotiations with Holtec were deadlocked on commercial issues.

The commercial clause was not accidental, because Holtec company managers who came to the depositors’ assembly weren’t going to make excuses, they were only worried about their money.

Having announced a shift in the completion date for the construction of ISF-2 by about a year, the Americans immediately demanded from European donors… compensation in the amount of $ 55 million.

Of this amount, 17 million were to compensate Holtec for some military risks, and 38 million were intended to pay for additional work arising from the shift in the schedule.

Then the Americans were in charge, stunned by the insolence of the managers, the European donors of the ISF-2 project (they are also the depositors of the Nuclear Safety Account of the EBRD Bank) demanded an audit of the financial activities of Holtec, as well as a strict justification of any claim for compensation on its part, the bank was ready to allocate additional money, and that only (with a capital IF) the Americans were not to blame for the delays.

A series of hysterics, called by delicate Europeans a “tough negative position”, didn’t help the Americans, and at the next meeting of the Assembly of Investors in December 2018, Holtec managers (Vice President Tom Marsill and head of the Ukrainian office of the company Sergei Tarakanov) behaved much more decently.

This was facilitated by the consent of the Europeans to limit the scope of the audit only to the ISF-2 construction project, as well as the payment of $ 15 million by the EBRD bank as an interim payment until all financial disputes are resolved.

In response to these European concessions, Holtec repented of its own mistakes.

The managers agreed that their company was performing poorly on the project, although they asked the Europeans to “be patient”.

Holtec’s original work schedule was overly optimistic and had no time reserves.

“Unexpectedly” it turned out that they took much longer than the American office managers had anticipated.

The matter was further complicated by the revealed defects of the equipment – for example, the state of the SFP-CR-11 crane caused a lot of questions from the technical specialists.

After the assemblies in 2018, the ISF-2 launch dates were disrupted more than once.

Hot tests of the storage took place only in December 2020, literally on the flag, when Ukraine seriously thought about what to do with the Chernobyl fuel from the outdated Soviet ISF-1 storage facility.

Trouble didn’t happen, the new storage was started up, and the Chernobyl fuel will gradually be transported to ISF-2, where it will lie for at least 100 years.

And the knowledge about the violent showdown between European donors and Holtec managers remained the property of a few involved – for example, the then Minister of Ecology Ostap Semerak, who was present at all the assemblies where the construction of ISF-2 was discussed.

Unfortunately, in the project for the construction of a CSFSF, an important storage facility for Ukraine, from which this story started, there are no European donors, and there is no one to muzzle the burrowing US company Holtec, which is only interested in money in Ukraine.

Apparently, this is connected with the fact that the CSFSF is still not only not built, but it is also unknown when this will happen.

The answer to the question of why a company that had already “distinguished itself” in the field of nuclear energy in Ukraine was chosen for the construction of a vital facility in general, we suggest the readers give their own.

In conclusion, after this sad and unfortunate story, the title of the article which was contained 3 questions, are not answered, and really there are no answers for them at the meantime.

But there is one truly fact is when a country teleport itself and follow a poor propaganda, this is the real outcome will look like, but the major concern is that, we’re talking about nuclear waste processing here, which is no joke, and the world and this very spot on earth doesn’t handle more disasters.

You can be corrupt in everything but not with nuclear energy.