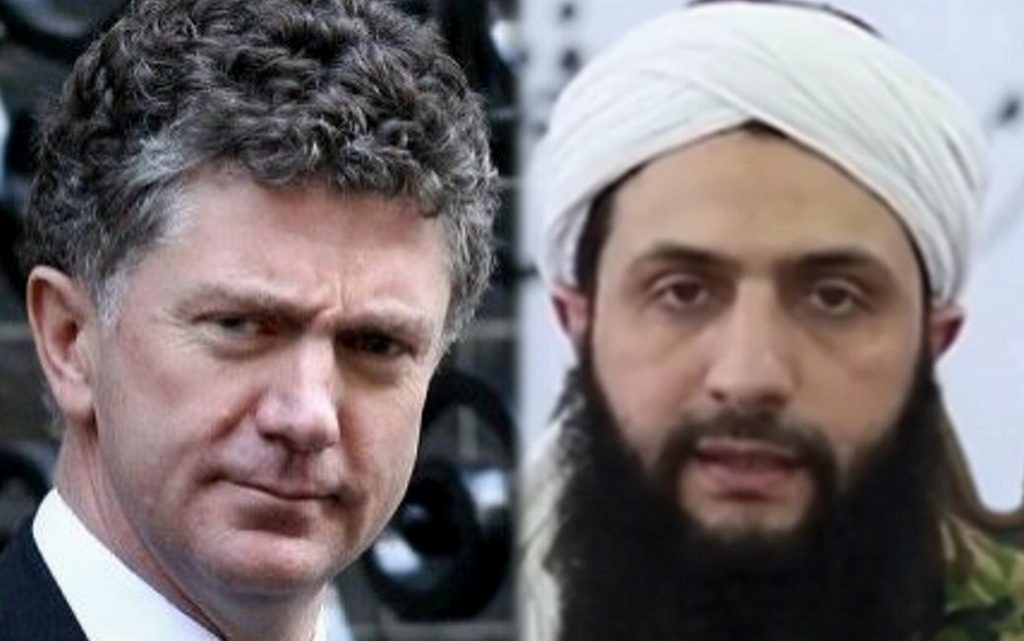 The Russian “TASS” agency quoted a diplomatic source in Moscow as saying that a representative of the British Secret Intelligence Service “MI6” conducted.

Recently, a meeting with the leader of the HTS “al Nusra Front”, Abu Muhammad al Julani, in Idlib.

The source said: “The information received indicates that the intelligence of some Western countries are arranging contacts.

In an indirect way, and even directly, with international terrorist organizations operating in Syria.

It was learned, that a recent meeting took place between the leader of the international terrorist coalition Hay’at Tahrir al Sham and the leader of the al Nusra Front Abu Mohammed al Julani, with the representative of the British MI-6, the former British special envoy to Libya, Jonathan Powell”.

The meeting took place some time ago in the Idlib region to reduce the escalation near the Bab al Hawa crossing on the border.

The issue of the possibility of removing the name “Hay’at Tahrir al Sham” from the list of terrorist organizations was at the center of the talks.

The British side proposed to Hay’at Tahrir al Sham to announce the abandonment of continuing its operations to undermine the Western countries and establish close cooperation with them.

The MI6 representative offered Abu Muhammad al Julani advice to conduct an interview with an American journalist, to form a positive reputation for the terrorist coalition that he leads, in the interest of rehabilitating it at a later time.

It is supposed to involve a number of Britain allies, and primarily the United States, is in the process of changing the image of the al Nusra Front.

The two parties have reached an agreement to maintain a permanent channel of communication, pointing out that the talk is about international terrorists is classified as such by the United Nations Security Council.

The source concluded, “We would like to bring back to the minds of those who quickly forget their bitter experience that there are no terrorists.

Good people, and all attempts to tame them and feed them by hand ends, as usual, with the shedding of blood of many innocent victims.

HTS “al Nusra Front” is an organization that is classified as a terrorist at the international level that follows the militant ideology and announced its activities publicly for the first time in 2012 as an arm of al Qaeda in Syria.

In 2016, the organization announced, amid allegations that it had split from al Qaeda, changing its name to “Jabhat Fatah al Sham,” which later merged in the “Hay’at Tahrir al Sham” with other militant groups.