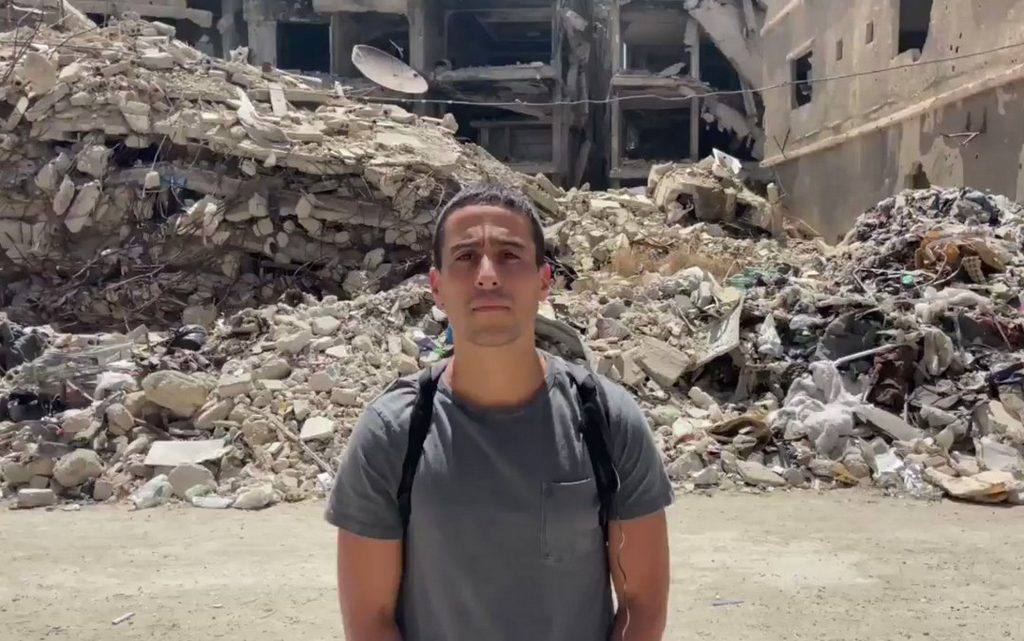 “I am in a place not far from the place where one of the biggest pro-war deception operations since the Iraq war took place,” said “The Grayzone” correspondent Aaron Mate, during a video he posted to his Twitter account, while visiting the Syrian city of Douma.

Mate added, “This is where in April 2018 dozens of bodies were filmed inside a building and the people who published this video claimed that the victims were subjected to a chemical weapon attack carried out by the Syrian government”.

He also pointed out that this led to air strikes on Syria by the United States, Britain and France, stressing: “But we now know that the alleged Douma incident was orchestrated”.

According to the Canadian-American journalist, “We know this because the hospital scenes filmed here were confirmed by the people in the video and the doctors as a hoax by the owners of the White Helmets, the UK and US funded organization that works closely with sectarian militias inside Syria.

He added, “Including the one that was in control of this city, called the Jaish al Islam (Army of Islam)”.

Likewise, the journalist continued: “What happened in Douma was a play, because the largest chemical weapons watchdog in the world, the Organization for the Prohibition of Chemical Weapons, came here and conducted an investigation and did not find any evidence of a chemical weapons attack,” pointing out that it “found evidence of “This incident was a theatrical event, but my findings were manipulated and suppressed”.

He said, “Senior officials in the organization tried to blame the investigators and the facts were hidden from public opinion”.

According to him, “this cover-up continues and is even now a public cover-up, as the same countries that bombed Syria and launched the war from the United States to the United Kingdom have sprayed the inspectors and prevented them from publishing their evidence.

“What all this means is that this cover-up contributes to denying justice to the victims who were killed here, tens of people who were photographed dead inside Douma near me,” he stressed, saying that “the cover-up deprives them of justice and until the inspectors are heard and the cover-up of the Chemical Weapons Organization is addressed”.

Seriously, these people will be denied justice, and we will never know who really killed them, and the people who killed them will continue to get away with their crime”.

It is noteworthy that in the year 2019, WikiLeaks revealed that the experts of the Organization for the Prohibition of Chemical Weapons (OPCW) denied the use of chlorine gas in the Syrian city of Douma, and added that senior officials of the organization forced the members of its mission to Syria to falsify the facts.

The agency published documents related to the report which indicated that senior officials in the organization had issued orders to delete this information from the report, which admits that the “chemical attack” was a theatrical run.

The Syrian Foreign Ministry rejected the report of the OPCW fact-finding mission on the use of toxic chemicals in Douma in April 2018.

Douma is considered one of the most important cities in the Damascus Countryside Governorate, and the largest population center near the capital, Damascus (before 2011, it had more than 150,000 people).

It was the agricultural and industrial reservoir of the capital, with its famous Ghouta, which has various agricultural crops.

The former US ambassador to Damascus, Robert Ford, told the “Washington Post”: “The Syrian elections and the vote of the Syrian president in Douma have indications that are not hidden from anyone”.

The rule of the Assad family, through the political path of Geneva, under the supervision of the United Nations, which has been flabby for 7 years, without any result”.

The Palestinian refugee camp Yarmouk was destroyed in the brutal battle between Syria’s gov’t & foreign-backed militias that occupied it, including ISIS. US sanctions on Syria prevent its reconstruction.

No matter your views on the war, why block its survivors from rebuilding? pic.twitter.com/5w14uoEAlf