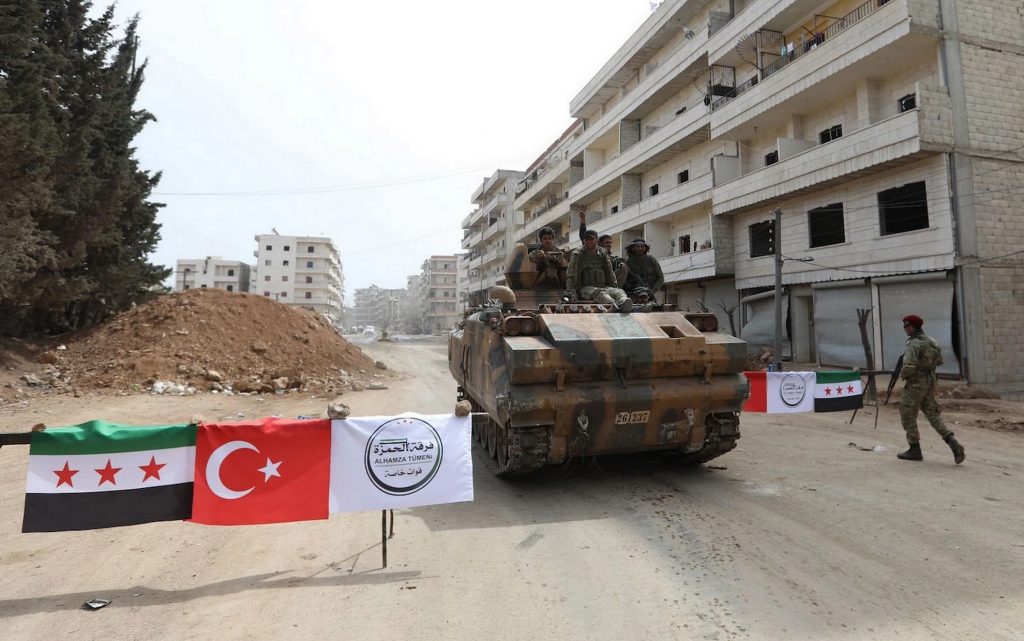 There is an old Turkish proverb that says: Turks never leaves a place where they put a stone in it.

Perhaps this proverb shortens everything, it’s summarizes history of Ottoman and the Seljuk domination before it.

More than a 1000 year of Turkish presence in this geographical part of the world.

For those who think that the current Turkish endeavor to establish a presence in Syria is related to the political and military situation imposed by the events of the Syrian war, and has nothing to do with historical ambitions here are few facts from what is happening.

Turkey’s Erdogan, was in constant working on solidification Turkey’s presence and influence in Syria even before the war, at a time when the official Turkish-Syrian relations were distinguished.

And since 2011, and multiple military operations, such as the Spring of Peace and the Shield of Euphrates, Turkey has been working to consecrate its presence on Syrian soil, as it has formed what is known as the Syrian National Army, and there is a real option that has become devoted today to forming what is known as a “Buffer State” separating the Turkish territories from the Kurdish-controlled areas.

And since the Syrian government is powerless to reach these areas, at least for now, every single piece of land that is currently controlled by Turkey, will be part of Turkey in the future.

We can say that the Syrian state as we knew, is no longer exists on the ground, and the weakness of the Syrian government has become fact and apparent matter, especially when the country is in the areas under government control is suffering from the weight of dire economic situation, with scarcity of food, lack of fuel and electricity, and weak government control of what remains of the economy at this devastated country.

Turkey also, in recent months, consecrated its presence in the areas of the so-called Spring of Peace, olive branch and Shield of Euphrates, at the services level, even at a minimum, in light of the weak security stability in those areas due to the control of the Syrian militias loyal to Turkey over it.

After sending Syrian fighters to Libya, Azerbaijan, and in fact the Syrian fighters in the north, had become like expendables forces, and the Turkish intelligence in complete control on them.

Recently words spread in the area of possible mobilize Syrian fighters to be sent to Yemen to fight against the Huthies, to the City of Ma’areb alongside the Yemenis fighters of Reform Party (Hezb al Islah) who is affiliated with Muslim Brotherhood.

Even during the recent Russian-Ukrainian escalation on borders, there were plans to send Syrian fighters to fight with Ukraine against Russia and its loyal forces at the eastern Ukraine separatist regions.

The northern Syria on economic aspect, at first, under Turkish influence, deal mostly use the Turkish lira, the markets are over whelmed with Turkish goods.

Turkish Lira is currently the official currency for buying and selling, trades exchange, and that includes Idlib as well.

Speaking of Idlib, Turkey is connecting the region with Turkish power stations, to supply Idlib and northern Syria with electricity from Turkey.

In addition to the opening of branches of the Turkish Postal Company and money transfer (PTT), in addition to flooding the local markets in these areas with Turkish goods and products as mentioned.

The north of Syria and the regions of Afrin and Idlib are fully open for Turkish goods flooding without any obstacles, nor customs fees, and through the official border passing between Turkey and Syria, which all of them are under Turkish control through its Syrian opposition armed groups.

As for the raw materials and local crops in these areas, they are all controlled by Turkish merchants at the lowest prices, and some of them are obtained by force, such as olives and olive oil from Afrin and Idlib.

The Turkish government is directly taking the crops in the areas controlled by the Syrian opposition, especially in the Kurdish-majority Afrin region, which has been considered one of the largest sources of olives and the luxurious Syrian olive oil.

It was known that Syria, for long time before the war was the fifth in the world and second in the Arab world in terms of quality of production of olives and olive oil according to the classification of the International Olive Oil Council in Spain.

However, after the loss of the vast majority regions that usually was the main source of olive/olive oil, with the other regions who are under the control of Syrian government lost its ability to maintain the production and the amount was dramatically decreased.

Since Turkey controlled large parts of northern Syria and Idlib, all the crops in those areas have been forcibly sold to Turkey at the lowest prices, without much room for farmers and local producers to work freely, especially since they are under the control of Syrian opposition armed groups who literally act out there like gangs.

After the Olive Branch and Shield of the Euphrates operations launched by the Turkish forces with the Syrian armed groups in the northern regions of Syria, started on a systematic demographic change, especially in areas that had long enjoyed a Kurdish majority, and here Afrin comes at the forefront of these regions.

Syrian militias, put their hand on properties of the indigenous people, and among these properties were the residents’ homes and agricultural lands that are full of olive trees, in addition to the local olive press facilities, and the production of course of olives and fine olive oil.

The Extra Virgin Olive Oil is the first type of olive oil varieties, and Turkey’s global production is ranked sixth after Syria, but after the war in Syria, Syria lost its place and Turkey now controls more of the resources of Syrian olives oil.

Of course, the large Turkish companies, started to buy that oil.

The one liter of Turkish-origin Extra virgin olive oil is sold in local Turkish markets, is up to 70 TL (8.30 USD), with the maximum wholesale price around 56 TL (6.65).

It became known among olive and olive oil traders in Turkey with phrases (tricked oil or broken oil) are for the stolen Syrian olive oil, because it is being sold at a very low price compared to its quality, in addition to the inability to exchange it in the Turkish market within the major cities, due to different pricing and balance standards in the market, leaving the opportunity for traders and companies to export this oil and gain from exporting it outside Turkey as Turkish Extra virgin olive oil, as it undergoes chemical treatment to comply with the results of laboratory analyzes that measure acidity and organic composition and compare it with Turkish varieties and standards according to each country.

Of course, the European market is welcoming that oil, without knowing, or perhaps care to know that this oil is simply stolen from Syrian territories!

In administration and civil affairs, the all the Syrian controlled by Turkey, are maintained by Syrian oppositions bodies, under supervision of nearby Turkish States governors (Walis).

Even the names of streets, schools and squares, many of their original names have been changed, and replaced with other names that fit the Turkish trend and the Syrian opposition, and the Turkish flag is now formally placed next to the Syrian flag, the three red stars, above the buildings and in the streets and squares.

On educational level, Turkey is currently working, through decrees issued by the Turkish President, to open various branches of educational colleges that are affiliated with some Turkish universities.

For example, Turkey issued a decree to open a medical college and an institute belonging to the University of Health Sciences in Istanbul.

At the beginning of this year, the Turkish president signed a decree to open a college and a higher institute for health sciences in the town of Joban Bay in northern Aleppo, affiliated to the University of Health Sciences in Istanbul.

The university opens a college for Islamic sciences in Azaz (Northern Aleppo), another for education in Afrin, and a third for economics and administrative sciences in al Bab (North-east of Aleppo).

In general, Turkey has soft power that help to consolidate its presence, taking advantage of service, humanitarian, religious, and even social, sports and cultural aspects which all requires efforts.

Recently, Turkish authorities even canceled the validation of power of attorney documents that insures ownership of real-estates belongs to native residents especially those in Afrin, that are issued by Syrian government authorities, as all these real-estates had become under the administration of local authorities who are mainly the armed groups loyal to Turkey.

Besides that, Turkey is undertaking demographic change to the population is areas were mainly inhabitant by Kurds.

One of the most dangerous things, that Turkey is control the water of the Euphrates river, as the level of water was dramatically decreased, as dams at the river that being used to generate power and help for irrigation are almost out of order.

As for fulfilling the need for oil in northern regions of Syria, they are obtaining fuel needs by purchasing Syrian oil from the areas controlled by the Syria Democratic Forces and the United States, and rudimentary refining it in areas in northern Syria, in addition to buying fuel from the Turkish interior through tanks entering from the border areas in each region.

In conclusion, and for those who are describing the areas of Syria that Turkey controls, as a Heaven on Earth, security wise, these areas are full of chaos, with the continuation of conflicts, clashes, kidnappings and random arrests, in which militias and armed groups loyal to Turkey are based and supervised by.

We should remember that most of them are not from those areas in the first place, as large number of those opposition fighters came from the regions of Daraa, Homs, Damascus and its countryside, with their families, where they were sheltered in northern Syria, Idlib and Afrin after the reconciliations and agreements formed by Syrian government and Russian and Iranian supervision.

All of those are now are mercenaries under Turkish supervision and command.