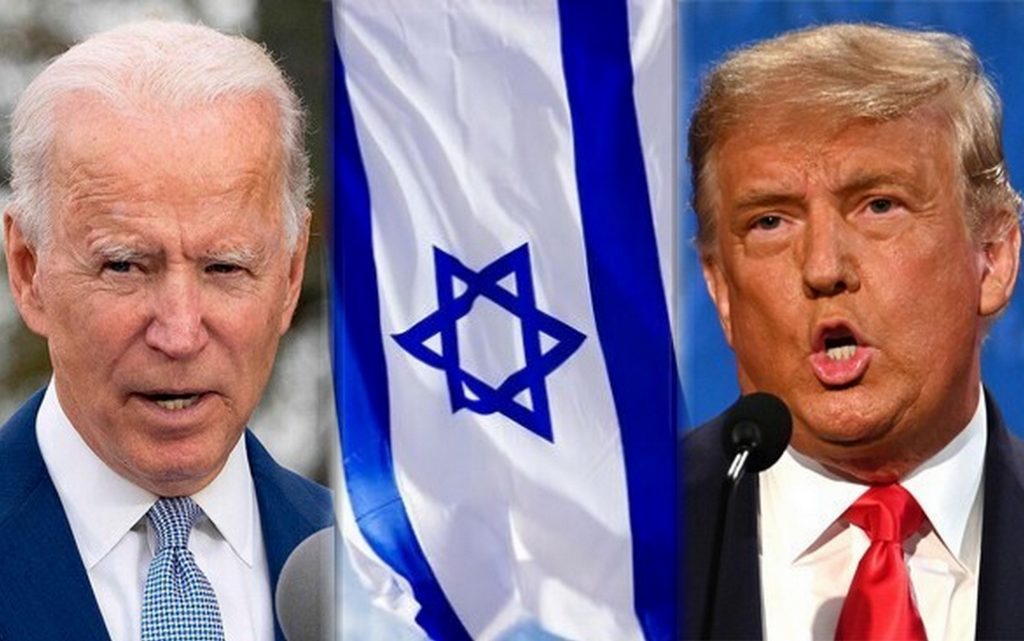 Giovanni Russonello, wrote at the New York Times, about the position of US President Joe Biden’s administration on the Israeli-Palestinian conflict, saying that former President Barack Obama’s administration sought to draw a line in the sand about this conflict in late 2016.

Instead of blocking a UN Security Council resolution condemning the expansion of Israeli settlements in the West Bank and East Jerusalem, the United States abstained.

Days later, then US Secretary of State John Kerry warned in his farewell speech that the possibility of a two-state solution diminished with the incursion of Israeli settlers into Palestinian-controlled lands”.

We cannot properly defend and protect Israel if we allow the destruction of a viable two-state solution before our very eyes,” Kerry said.

But over the next four years, President Donald Trump showed no interest in the first place in Israel’s violations of settlements, or the conflict in general.

Quite the contrary: He counted Benjamin Netanyahu, the right-wing Israeli prime minister, as one of the preferred foreign leaders, and took major steps to endorse the expansion of Israel into the territories controlled by the Palestinians.

All of this set up a series of complex choices for Biden: Which of Trump’s moves can be reversed and which one is irreversible?

How far should the administration give the Israeli government as it expands more deeply into Palestinian-controlled territory?

Now that Israeli settlements predominate (in the West Bank), is the “two-state solution” a viable goal?

Russonello answered these questions by stating that so far, Biden has shown little interest in getting involved in the Israeli-Palestinian conflict.

This means that he has done relatively little to reverse Trump’s approval of Israeli expansion in Palestinian-controlled territories, or to repel Israeli attacks on Gaza.

Last week, Biden said he considered the recent Israeli military operations to be justified, given that Hamas militants have fired thousands of rockets into “Israeli territory” since protests and skirmishes erupted in East Jerusalem in recent weeks.

“I expect and hope that this will end sooner rather than later,” Biden said, speaking slowly and weighing his words.

“But Israel has the right to defend itself when you have thousands of rockets falling on your land”.

Since then, the number of Palestinians killed has risen to the hundreds, including more than 50 children, and Israel demolished a building housing media offices, sparking international condemnation.

Yesterday (Tuesday) afternoon, in a conversation with Netanyahu, Biden expressed support for the ceasefire for the first time, but he declined to demand an end to the Israeli bombing campaign on Gaza and Hamas’ firing of rockets from Gaza into Israel.

Lara Friedman, president of the Foundation for Middle East Peace, said that for supporters of Palestinian rights, Biden’s approach did little to advance the ball”.

The feeling of disappointment and betrayal is palpable,” she said”.

These comments are clearly read by the “Bibi” government (Netanyahu) as a green light,” she added, referring to President Biden’s public statement last week.

“If this is not what you mean, then you have to say something.

If that is what you mean, then you must assume responsibility”.

The transfer of the US embassy to Jerusalem

The writer pointed out that during the years of Trump’s rule, perhaps the clearest display of support for Israeli expansion in the Palestinian territories was the announcement, in 2017, that the United States would move its embassy from Tel Aviv to Jerusalem, recognizing the disputed holy city as the capital of Israel.

Jerusalem, which is currently inhabited by a mixture of Muslims, Jews and Christians, will feature prominently in any possible negotiations on a two-state solution.

Supporters of a Palestinian state have long considered control of East Jerusalem non-negotiable.

In 1995, Congress passed a law – voted for by Biden when he was a senator – recognizing Jerusalem as the capital of Israel, but no US president has taken steps to move the embassy to the holy city.

During his campaign, Biden criticized Trump as “short-sighted” for moving the embassy, ​​but said he would not return it.

“Returning the embassy, ​​it will be difficult,” Friedman said, as it would affect an enormous amount of political capital.

But “it is not just a matter of not undoing the specific fait accompli that they inherited”.

She added, “What they also inherited was an almost constant American policy of support for Israel, an approach that has become difficult to maintain as Netanyahu pressed for a right-wing agenda towards the Palestinians”.

“Since things are changing very quickly, the talk about a“ two-state solution ”has begun to sound almost strange, said Yusef Munir, a researcher at the Arab Center in Washington, DC.

The Trump administration has basically buried the possibility of two states”.

But he added that the Biden administration “was unable to find a way to define a path forward,” due to what he considered “the absence of leadership at this moment”.

The Golan Heights and settlements

In March 2019, Trump formally recognized the sovereignty of Israel over the Syrian Golan, a Syrian area that Israel captured in 1967, and most of US main allies still consider it to be “occupied” illegally by Israel.

Trump’s move drew condemnation from the United Nations Security Council, as well as prominent Democrat politicians, who described it as a violation of international law that prevents states from retaining territories they seize through war.

But the statements of Netanyahu and Trump’s Secretary of State, Mike Pompeo, seemed to open a hole in this very principle, according to Friedman, who said that when they recognized Israeli sovereignty over the Golan, they “set up a new principle of international law with regard to the United States, which said that any country can keep Land obtained in a defensive war.

And this principle, if you believe in it, allows Israel to keep the West Bank as well”.

The Biden administration has shown little desire to rewrite US politics.

Biden’s Secretary of State, Antony Blinken, said in February that control of the Golan Heights “remains of real importance to Israel’s security,” and indicated that he has no immediate plans to reconsider the Trump administration’s move.

Trump also sent his ambassador to Israel to visit the settlement of Ariel in the West Bank, in violation of the old tradition of not legalizing the occupied sites.

J Street, a left-leaning Jewish American lobbying group, criticized the move at the time as crossing “a major long-term red line of US policy from both parties”.

Biden has condemned settlements in the West Bank that Palestinians regard as essential territory for their future state, but has not indicated that he intends to take meaningful steps to stop them.

Meanwhile, the Israeli government is paving the foundations for further encroachment, including large investments in settlement infrastructure.

Munir said that without deviating from Trump’s precedent, the Biden administration risked tacit support for Israeli expansion in the Palestinian territories”.

US policy, regardless of the administration – Clinton, Bush, Obama, Trump – has helped stimulate the race to the right in Israeli politics, by ensuring that there are no consequences for doing so”.

US aid to the Palestinians

The Trump administration has cut US support for the United Nations aid program for Palestinian refugees and other forms of support for residents of the Palestinian territories.

Biden has pledged to resume sending in millions of dollars in aid.

The United Nations agency, UNRWA, provides health care to more than three million Palestinians, as well as educational and other assistance.

Last April, the Biden administration said it would send $ 150 million to UNRWA, in addition to allocating $ 85 million in direct aid to the Palestinians.

However, this may face some legal hurdles.

Congress passed the Taylor Force Act in 2018, which restricts aid until Palestinians agree to certain conditions.

The administration has said it intends to comply with the legislation when distributing aid.

Biden is also working to reopen diplomatic channels with the Palestine Liberation Organization.

In 2018, Trump closed the Palestine Liberation Organization mission in Washington, a move that previous administrations had deliberately opposed taking, indicating that the possibility remains open for peace talks toward a two-state solution.

Biden pledged to reopen the office of the Palestine Liberation Organization mission.

But this plan could run into legal problems as well, thanks to another step in the Trump era: In a year, Trump signed an act that, in the face of a Supreme Court ruling, would leave the PLO vulnerable to lawsuits seeking millions of dollars in damages for the shootings and bombings.

The precedent if it were to reopen an office in the United States.