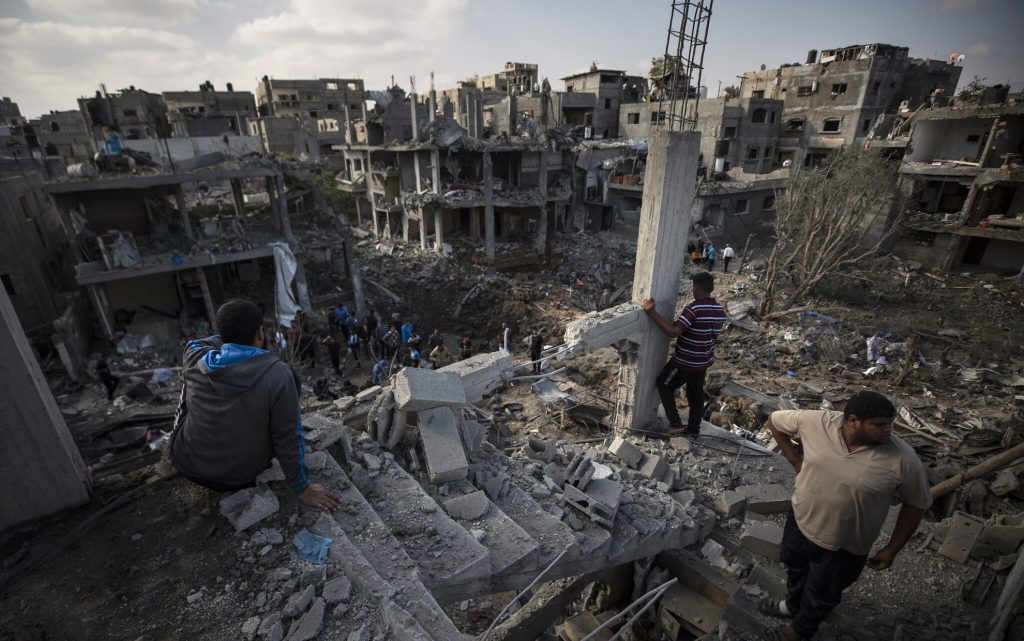 According to Reuters, 3 Palestinians were killed and others were wounded, at dawn on Wednesday, in an Israeli air strike on Gaza City.

The Turkish Anadolu news agency correspondent reported that an Israeli aircraft bombed the house of journalist Yusef Abu Hussein, in the Sheikh Radwan neighborhood, with 3 missiles, and he was a broadcaster in the local Voice of al Aqsa radio station, which led to his death.

Voice of al Aqsa radio station called the martyr, and said that he is “one of the knights of the word and the truth and has been working as a broadcaster in it for years”.

In another incident, an Israeli raid on an apartment in al Rimal neighborhood, west of Gaza, killed two Palestinians and wounded two others (without mentioning a specific number).

Israeli warplanes destroyed, with several missiles, a building housing a charitable association headquarters in the center of Rafah.

Israeli warplanes also destroyed a residential house in the town of Beit Hanoun, no casualties were reported.

Earlier on Tuesday / Wednesday night, Israeli warplanes bombed an empty land in the Shati refugee camp, west of Gaza City, and a resistance position in Jabalia, in the northern Gaza Strip.

Israeli aircraft and artillery launched a series of violent raids on the cities of Khan Yunis and Rafah, in the southern Gaza Strip.

According to the Anadolu Agency correspondent, the raids targeted infrastructure and lands adjacent to the homes of citizens, while Israeli gunboats fired shells towards the coast of the Khan Yunis Sea.

In the center of the Strip, an Israeli aircraft fired a missile at a truck parked in the Maghazi camp, which caught fire.

Thus, the toll of the Israeli aggression on Gaza, which continues for the tenth day, rises to 221 martyrs, including 63 children and 36 women, in addition to more than 1500 wounded.

The Israeli army said, on Wednesday morning, that 52 of its fighters, dropped 122 bombs on targets in the Gaza Strip, last night, within 25 minutes.

This came in statements to reporters made by the Israeli army spokesman, Brigadier General Heidi Zilberman, according to the Hebrew newspaper “Yediot Aharonot”.

On Wednesday morning, the Israeli army announced that about 50 rockets were fired from the Gaza Strip towards Israel during the past 12 hours.

The army said in a statement that since 7 pm local time, the Palestinian factions fired about 50 rockets towards Israeli territory, 10 of them landed inside the Strip.

The army did not mention in its statement whether the rockets that fell inside Israel had caused casualties or property losses.

During the night hours, Palestinian factions fired rocket-propelled grenades at the cities of central and southern Israel.

Since the outbreak of the current round of escalation on May 10, Palestinian rockets have killed 11 Israelis and wounded dozens.

In turn, al Qassam Brigades, the military wing of Hamas movement, announced, on Tuesday night / Wednesday that it had directed missile strikes at six Israeli air bases, in response to the Israeli raids on the southern Gaza Strip, Tuesday evening.

The brigades stated in a statement on their website that the bases that targeted them are Hatzor, Hasarim, Nevatim, Tel Nof, Palmachim and Ramon.

The brigades revealed earlier yesterday that they had used “Q-20” missiles in a missile strike that killed two and wounded twenty others in the Eshkol Regional Council.