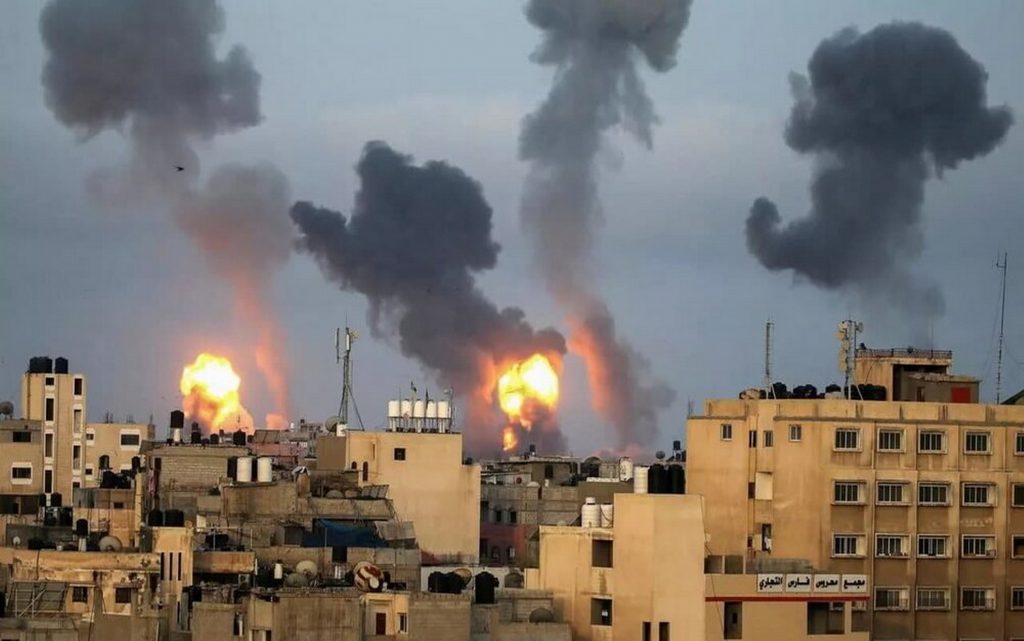 The British newspapers covered the latest developments regarding the ongoing fighting between Israel and the Palestinians, in addition to analytical articles related to the history of the political-religious conflict.

The Times published an analytical article by its Middle East correspondent, Richard Spencer, entitled: “hopes and expectations, but no guarantees after Biden’s call with Netanyahu”.

Spencer says US President Joe Biden may want to divert his attention away from the Middle East, but as with his predecessors who had the same idea, recent events between Israel and the Palestinians forced him to “make the call” last night.

He adds that he did not know exactly what was said, but Biden said after the end of the call that he “hopes and expects” that “the current ceasefire between Israel and Gaza will be concluded soon”.

However, it is difficult to know whether this “expectation” part was derived from specific assurances he received, or whether it was the message that he himself sent to Netanyahu.

And he notes that it is clear that “the ground war is a distraction Biden does not want early in his term as he is trying to assess his policies on the Middle East, including the nuclear negotiations with Iran”.

“The fact that he does not have an ambassador to Israel or an envoy dedicated to Israeli-Palestinian affairs indicates where his priorities lie,” he adds.

Spencer says if Netanyahu’s message during the call is to de-escalate the escalation, Biden would be grateful.

However, if the expectations are entirely on Biden’s part, the phone conversation will be a test of how much weight the newly elected president has with the Israeli prime minister who, from past positions, seemed to dislike Biden.

The author concludes his analysis by saying that all US presidents never threaten an end to military and diplomatic support for Israel.

He believes Biden will certainly follow the example of his predecessors.

In this case, Spencer says, Netanyahu might feel that “it is in his interest to pursue his own political goals, rather than listen to Washington”.

“The violence in Jerusalem is driven by a new Israeli zeal”.

We turn to the Guardian newspaper and an article by Yair Welch, Senior Lecturer in Israeli Studies and Head of the Center for Jewish Studies at the School of Oriental and African Studies at the University of London, entitled: “The violence that began in the ancient holy sites of Jerusalem is driven by a new zeal”.

Welch says the clashes that occurred on Monday at the site Muslims call al Aqsa Mosque, and the Jews call it the Temple Mount, are nothing new.

But the belief that the desire for revenge relates only to an ancient stone site is misleading.

This is because the political importance of these places and their meaning has changed dramatically over the past century, especially for Israeli Jews.

“Judaism is a religion shaped by the absence of the Temple – after the Romans destroyed it in AD 70,” he says.

He adds that the Jewish prayers speak of a yearning to reestablish it.

Also, “the Wailing Wall for the Jews is sacred because it is a permanent relic that symbolizes the destruction that shaped Judaism”.

Welch says that after the Israeli occupation of East Jerusalem in 1967, the Wailing Wall was converted into a Jewish national monument.

It was transformed from a hidden wall, visible only at close range, into a huge theater that is not only used for prayers but also for official and military celebrations.

He adds that after 1967, religious settlers followed the language of Zionism and led the colonization of the occupied lands.

He notes, “But they interpreted the biblical promise of the land as a clear destiny.

In this context, the holy sites – now under Israeli control – acquired a new meaning and became a new front.

Thus, “some religious Zionists are no longer satisfied with the Wailing Wall, given that the Temple Mount is within reach”.

He points out that “in the eighties, there were two attempts by ultra-Orthodox groups to blow up Islamic sites in the Haram”.

Since then, “the group of believers on the Temple Mount, which calls on Israel to assert Jewish control over the Temple Mount, has transformed from a small marginal group into a movement with political support”.

In the past few years, the writer says, “the ideology of Jewish despotism has emerged as the dominant ideology that legitimizes Israeli control over the entire country, from the river to the sea”.

And he adds, “With regard to the Israeli radical right, Israel’s inability or unwillingness to fully control the Temple Mount” is a symptom of “weak sovereignty”.

Consequently, “the continued Palestinian presence in the al Aqsa Mosque appears to be the last major obstacle to Israeli hegemony – the site has a massive mobilization force among ordinary Palestinians who come to defend it by the thousands at such times”.

Thus, the al Aqsa Mosque represents a symbolic challenge to Jewish-Israeli domination that is far more important than the weak Palestinian Authority missiles or Hamas rockets.

The writer considers that this “may explain the violence of the Israeli police in storming the mosque, and the high number of injuries among Muslim worshipers this week – just as the crowd of Israeli youths singing genocidal songs for revenge while the mosque campus caught fire”.

“The world does not remember the Israeli-Palestinian conflict until after the outbreak of a crisis”.

We turn to The Independent and an article by Donald McIntyre dealing with the West’s disregard for the Israeli-Palestinian conflict until things get completely out of control and a bloody escalation of the conflict occurs.

McIntyre considered that the recent escalation could have been avoided and prevented.

He said that Western leaders had not commented on the acceleration of Israeli encroachment on Palestinian lands that nearly all foreign democratic governments have identified as lands of a future Palestinian state, in defiance of international law.

“This does not mean at all to condone or justify Hamas’ use of rockets during the current escalation,” he added.

But it is “a reminder that the world is ignoring the Israeli-Palestinian conflict until things get completely out of control”.

He said, “Back in 1995, Haidar Abdul Shafi, who is perhaps the greatest, and certainly the most independent, of all Palestinian political leaders, noticed that Hamas would not have reached what it had achieved had serious efforts been made to end the fighting”.

“Indeed, Hamas will never have the ability to disrupt a credible peace process,” he added.

He ended his article by saying that “the international community must bear its fair share of blame for the failure to end the increasing tragedies imposed on the Palestinians and the absence of the peace process”.