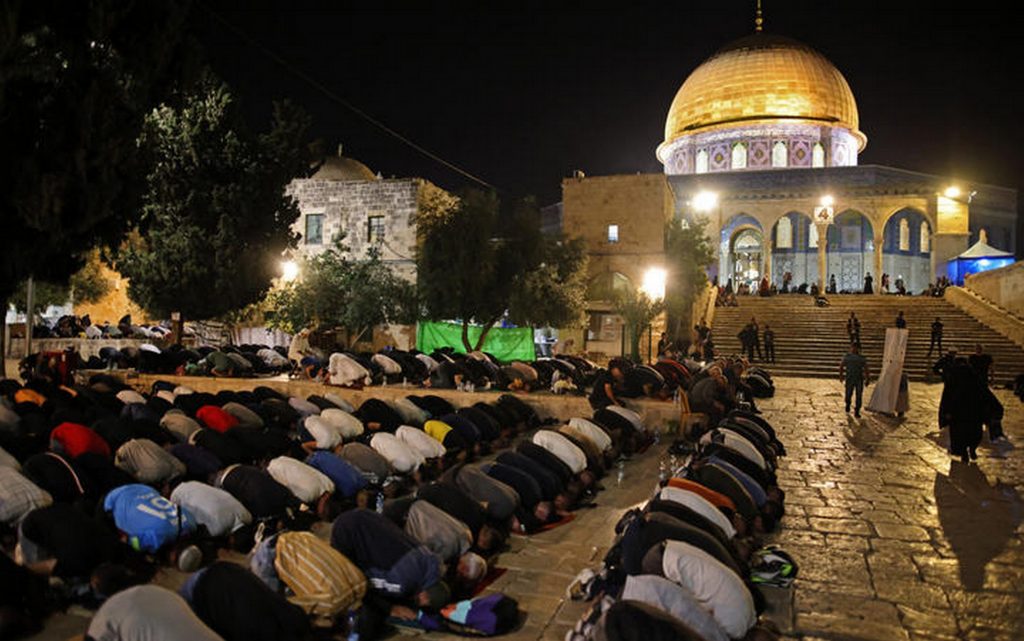 More Palestinians were injured, at dawn on Sunday, during clashes between Palestinian youths and the Israeli forces in al Aqsa Mosque, in the center of Jerusalem, bringing the number of injuries to one hundred.

The Israeli forces stormed the courtyards of the al Aqsa Mosque, after the outbreak of the confrontations, according to multiple international news Agencies.

The Palestine Red Crescent Society reported 10 injuries during clashes inside the mosque, at dawn.

The association indicated that one of the injuries was taken to hospital after being hit by a rubber bullet in the mouth.

Earlier, 90 Palestinians were injured during violent confrontations in the “Bab al Amud” area, one of the gates of the al Aqsa Mosque, 16 of them were taken to hospital.

The association stated that “most of the injuries were caused by rubber bullets and stun grenades, directly and by beatings”.

It indicated that among the victims was a head of family who was injured and 4 of his children with panic and fear, after the occupation forces fired stun grenades at them directly.

More than 90,000 celebrated, on Saturday, the Islamic Holy night of Laylat al Qadr in the al Aqsa Mosque, according to the Islamic Endowments Department, despite Israeli strictures.

Since the beginning of Ramadan, the city of Jerusalem has witnessed attacks by the Israeli police forces and settlers, especially in the “Bab al Amud” and “Sheikh Jarrah” neighborhoods.

In the context of the continuous Israeli escalation, Palestinian sources said that Israel targeted at dawn today, Sunday, a Hamas site in the Gaza Strip, which witnessed protests near the separation fence in protest against the tension in Jerusalem.

The sources stated that an Israeli aircraft bombed a monitoring site for the al Qassam Brigades, the military wing of Hamas on the outskirts of the Gaza Strip, causing material damage but no injuries.

For its part, the Israeli army said that the bombing was in response to the firing of a home-made missile from the Gaza Strip at an open area in southern Israel, without causing any damage or injuries.

No Palestinian party has claimed responsibility for the shelling, in a development that came after dozens of Palestinians were injured and suffocated on Saturday evening, in light of the escalation of tension with Israel, in light of the confrontations in the al Aqsa Mosque, east of Jerusalem.

For its part, the Central Committee of the “Fatah” movement led by Palestinian President Mahmoud Abbas said that Jerusalem “is an element of consensus and unity for all Palestinians, and a clash with the occupation and all its symbols”.

In a press statement, the committee urged “the continuation of the public uprising and the state of confrontation in the face of the occupation forces, settlers and their terrorist organizations who work with the support of the right-wing fascist Israeli government”.

The Fatah Central Committee called for an increase in the pace of confrontation in the Palestinian territories, friction points and settler roads, and action next Monday, and a sit-in in front of the international headquarters and foreign embassies.

In the context, hundreds of Palestinian youths demonstrated on the eastern outskirts of the Gaza Strip near the separation fence with Israel, amid sporadic confrontations with the Israeli army forces stationed behind the fence.

Local sources said that at least one young man was wounded by live bullets and dozens of people suffocated during the ongoing confrontations within the activities of “night confusion” that were resumed in protest against what is happening in Jerusalem.

The Palestinian factions in Gaza decided to activate the work of groups known as “rough tools” near the fence separating the Strip and Israel.

This includes activating the incendiary and explosive balloons launching units towards Israeli settlements adjacent to the Strip, in addition to the resumption of night demonstrations near the separation fence.

The Israeli media announced that 12 fires had erupted since this morning in open areas in southern Israel due to the launch of incendiary balloons from the Gaza Strip.

The “Hamas” movement, which controls the Gaza Strip, called for the comprehensive activation of “engagement points” in all Palestinian areas with Israel.

The movement said in a press release, a copy of which was received by the German News Agency (dpa), that “the continuous aggression of the Israeli occupation requires an inclusive national stance by activating all points of engagement”.

The movement urged “national disobedience and a massive mass movement that raises the slogan of Jerusalem in the heart of it, and translates to a comprehensive confrontation with the occupation”.