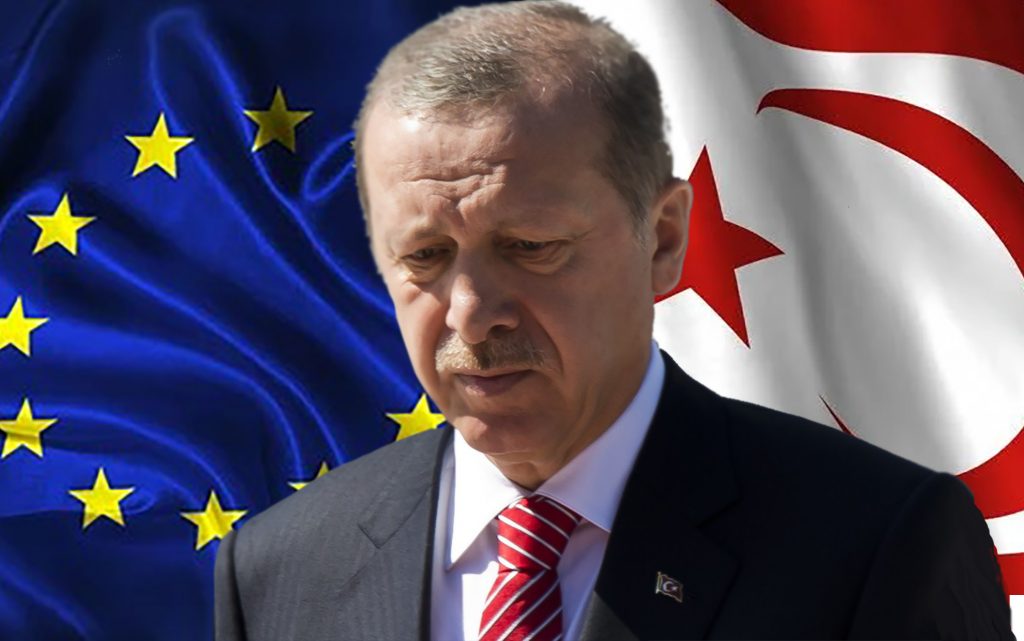 Once upon a time, in a country, far far away, Trump calls Erdogan, then announces limited sanctions on Turkey.

Erdogan goes out and screams and defies in front of his supporters, and behind the curtains, tries to communicate with Washington.

Then he’s defiant, and sometimes he reminds them that his country is a member of NATO, and he threatens to open the doors to the refugees, so they invade Europe from the Greek gate, or else…

The United States is expelling Turkey from the F-35 project, and the deal to acquire the S-400 system from Russia remains a focus of controversy.

Erdogan returns and maneuvers in Syria and Libya, at play with Russia, at same time with the West.

What does Erdogan do?

He sends mercenaries to every conflict spot related to improving his position in front of everyone.

He entered Libya, in Syria the situation continues to nowhere.

The war between Azerbaijan and Armenia broke out on the Nagorno-Karabakh region, Erdogan interferes with all force to support Azerbaijan, and the war ends with an Azerbaijani victory, and a Russian intervention to preserve Armenian dignity.

The conflict is over energy sources, including the conflict on the maritime borders, and here we come to another, old and new episode in the series of confrontation between the West and Turkey.

The problem of the maritime borders between Turkey and Greece is an unresolved historical dispute, that was a center stage multiple confrontations between the two countries in the last months.

On the other hand, the issue of the Turkish Republic of Northern Cyprus returns to the fore in the Greek-Turkish conflict.

We must not forget that both countries are members of NATO, but the hostility between the two countries is inherent.

Anyone who knows the nature of the Turkish mindset, especially in terms of the national wings, regardless of the side, left or right-wing, in these topics, both wings are heading towards same direction.

The two wings have three enemy sides in their literature and they are Armenians, Kurds, and Greeks.

Returning to what is happening recently, where the old/new US administration, if we can describe it that way, get used to the same method that we mentioned at the beginning.

President Biden calls Erdogan… the call lasts for half an hour… insiders say that the first contact of its kind between the two presidents was tense, and after a few days the US administration announced its recognition of the Armenian genocide.

Why does the US administration recognize the Armenian genocide at this very time?

And as a quick answer, before we continue, it summarizes the approach of the United States and the West in general, which is summarized by the phrase ((the word truth… the means false)).

We recall that the recognition is formal and doesn’t have any implementing clauses.

As for the issue of Northern Cyprus, the issue is being back to be used again just to impose more pressure on the Turkish president.

Weeks have not passed since a meeting between Ukrainian President Vladimir Zelensky and Recep Tayyip Erdogan, and here Erdogan returns to the same manipulative manner, insisting on annoying Russia, as Turkey kept its position of not recognizing Crimea as a part of Russia, to make the matter worse, he returned and renewed his support for Kiev, and even the Turkish intelligence, started making contact with the armed groups in northern Syria, to send them to a new «Expendables» journey, this time to Ukraine to fight against the Russian forces.

Before someone stop us, yes, we’re talking about Northern Cyprus.

Is all what we mentioned related to the Cyprus issue?

We must understand one fact.

Turkey has two wings, the right is like the national movement party, the ally party of the ruling Justice and Development Party.

From the left, it’s being led by the Turkish National Party (Vatan Parti).

Vatan Parti held a rally calling for shutting down the US/NATO bases “Incirlik” and “Corcik” in Turkey, cooperation with Syria, and the recognition of Crimea as part of Russia, in response to US President Joe Biden’s admission of the Armenian genocide.

During the rally organized by the left-wing Vatan Parti in front of the US embassy in Ankara, on Monday, its Secretary General Ozgur Bursali read a statement to the press, in which he called on the AKP government to expel American soldiers from Turkish military bases in Iraq.

He continued: “Diplomatic contacts with Russia, Iran and Azerbaijan should be intensified in order to jointly recognize the Turkish Republic of Northern Cyprus and the Crimean Peninsula, and establish military cooperation with the Syrian authorities to destroy the PKK as part of a cross-border operation, within 15 days.

The media office of the Vatan Parti told Russian news agency Novosti that the party also organized a rally in front of the United States Consulate in Istanbul and is planning similar activities in other Turkish cities this week.

We must note here, that a decision was issued on the same day by the Turkish government to impose a complete lockdown in the country due to the outbreak of the Coronavirus between April 29 and May 17.

This means that the rallies planned by the Turkish National Party will not take place.

All this inconsistency and ambiguity in the Turkish official position puts the whole situation in chaos.

How can we solve all these complicated issues and reach for answers for this mystery?

The answer is easy, from all of the above, and it is much less than the many issues in which the Turkish government’s bad policies and its legitimate rights overlap.

Observers will notice from all of the above the extent of chaos and interference, which gives any conscious person an idea of ​​how much chaos Turkey suffers.

We won’t, of course, talk about the economic situation, which was only missing from the deterioration of the Turkish lira’s exchange rate, which decreased, the dismissal of the Turkish Central Bank governor, the large spread of the Coronavirus in Turkey in the recent period, and finally the Thodex company case.

With all these problems, we offer full sympathies to the people in all Cyprus (Greek or Turkish background).

We say that the Cyprus issue should be resolved in the interest of the peoples, not the ruling regimes on both sides.

Because, those political leaders who scream and hold forums to discuss the Cyprus issue, have no ideas, no intentions, and no authority to take any serious steps, and they even don’t have interests in finding any solution.

They are, in fact, not interested in resolving the situation, they don’t care.

They’re in fact could care less about the fate of these peoples.

The Cyprus issue was one of the main issues that prevented any progress in the matter of Turkey joining the European Union.

Of course, this issue won’t happen, Turkey will never join the European Union.

We haven’t heard that Britain, which is the cause of the problems in the first place, has done anything to resolve the dispute, and of course this is the case with Britain, as always.

Britain created similar conflicts in many places worldwide, and the Greek problem is the same everywhere Britain has been, such as the conflict in India, which reached the separation of Pakistan, and later Bangladesh from Pakistan, and an ethnic conflict between Muslims, Hindus and Sikhs still continues to this day, with several wars fought between India and Pakistan.

The situation in Iraq, Sunnis, Shiites and Kurds, the Arab-Israeli conflict and the division of Palestine, Sudan and many, many more.

Of course, the United States, the heir to the British Empire, didn’t work on solving the Cyprus problem.

Since when, the United States was able or worked honestly to resolve any dispute in the world?

The current attempts to impose a situation, or rather to preserve the anxious situation without a radical solution to the Cyprus issue, is a systematic action on the part of the West.

The Americans and the Europeans are continuing the carrot and stick policy with the Turkish president, nothing more, nothing less.

What concerns us here as an independent opinion, is the fate of the inhabitants of this island, regardless of their origin, Turks or Greeks.

Both sides deserve better, they both can live together and resolve their differences on this land, and work to turn the bloody page.

This is a duty of the people in the first place, Greeks and Turks.

After all that has been listed, which is a description of the state of chaos in which Recep Tayyip Erdogan’s policies have suppressed Turkey, and the cause of its continuation.

On the other hand, both parties must realize that whoever was the cause of the problem, and could have worked to solve it long ago, we shouldn’t expect today that, those are speaking today, have no sincere intentions and purpose to solve it.

The Americans and the West have no interest in stopping the suffering of the island of Cyprus, as they are maneuvering and gambling with their fate, and with great regret the Ankara government is working in one way or another to give them opportunities to do so.