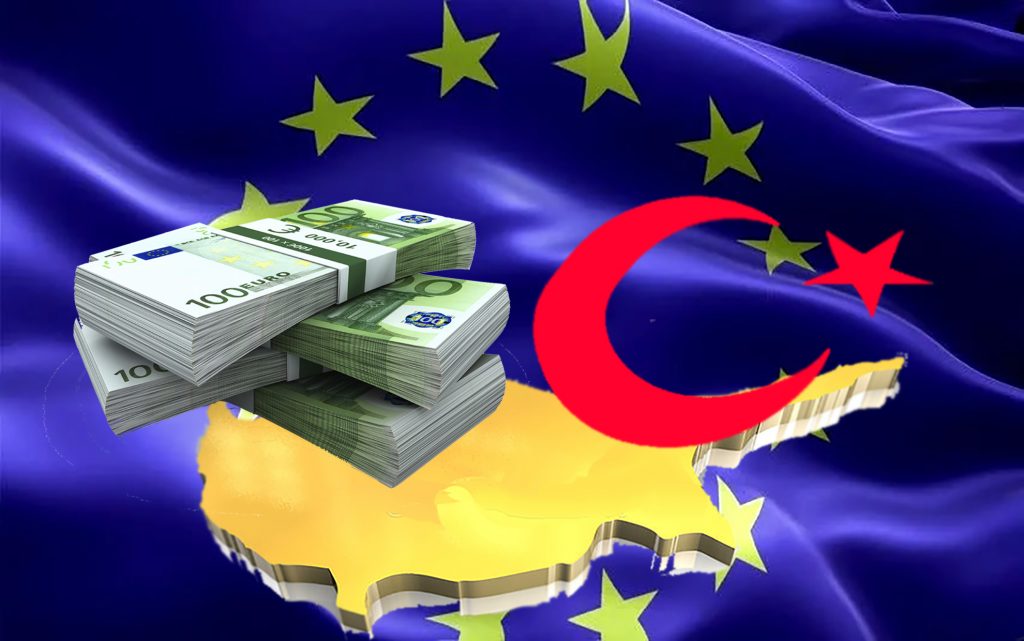 Powers within the European Union are working on a scheme that is not without malicious intentions regarding the way in which it will work to shake up the Cyprus issue, an issue that remains one of the old and persistent dilemmas between the Europeans and Turkey for long time.

With the forum of the 5 + United Nations, which doesn’t bear any official status, discussing the issue of Cyprus, that is being hold in Geneva from 27 to 29 April.

Generally, there’s nothing special, however, what makes it different this time, is the existence of an idea, which the EU is working on.

This Idea can be summarized by a simple principle, which is to offer great temptations to the Turkish Republic of Northern Cyprus, which does not enjoy any international recognition, except for Turkey of course, in a new endeavor similar to the offers of the Italian Mafia use to bring to the bargaining table, which is (an offer that cannot be refused).

The aim is to create a gap and rift separating the Turkish Republic of Northern Cyprus from Turkey, and thus strip Ankara of this card, and even expel it from the entire island of Cyprus, after more than 45 years, since the Turkish military intervention on the island in support of the Turkish Cypriots.

The information states that the High Representative of the European Union for Foreign Affairs and Security Policy, Josep Borrell, is working on this scheme, in an atmosphere of increasing tension between Turkey and the European Union, where the European Union is supporting and the anti-Turkish side is known, at a time when the Turkish President finds himself in a spiral of political and economic pressures.

It is no secret that one of the difficult circumstances that Turkey is currently facing, in an atmosphere of the devaluation of the Turkish lira, and a significant increase of Covid cases in the country, which forced the Turkish government to announce, a complete lockdown in the country extending from the 29th of April until the 17th of May.

In fact, the events that are taking place directly targeting Turkey, which come with sequential steps.

Indeed, US President Joe Biden’s declaration of recognition of the Armenian genocide, even if this recognition is devoid of any actual implementation steps, remains a disturbing topic that will distress Ankara.

The meeting held in Geneva also carries with it another step that would make a qualitative leap in the way of dealing with the Cyprus file, as we can summarize the matter with a simple sentence: bringing the Republic of Northern Cyprus to Europe in exchange for great temptations and pushing it away from Turkey.

The purpose of the plan is to reach a formula, for the future maybe, is to eliminates the idea of ​​two states on the island and unifies them in one state as soon as possible, in which a participatory ruling formula will be reached under the umbrella of the European Union.

On the other hand, given the current reality in which Turkey is living and the number of countless crises around it, it is in a position unable to provide anything in return for the Turkish Cypriots.

The current idea puts one of the most important issues for the Turks, on the Cypriot island and the Turks as a whole, at stake, as the European Union will offer the Turkish Cypriots all the temptations that Turkey has dreamed of for years from Europe, in exchange for a new gifts and methods that will end and close the Cyprus file in a way that guarantees a political victory for the European diplomacy, and Turkey will be out of the picture completely, and may even bear the consequences of that, the provisions of a kind of pressure on Turkey itself later to obtain major concessions, which Recep Tayyip Erdogan may not be able to offer.

And here we must mention that the US hand behind this European initiative is clearly visible.

In general, the Brussels institutions are working on activities targeting the Greek and Turkish elites on the island, something that began before the Geneva meeting, which took place at the invitation of the United Nations Secretary-General António Guterres.

Where the European Union engages in a range of activities directed at the Greek and Turkish elites on the island, with the revitalization of the United Nations institutions on the island that primarily serve European and US interests.

What raises doubts about the new European plan is that it may not only target Turkey.

Rather, this plan has implications that will affect the influence of countries such as Russia and China in the eastern Mediterranean region.

Will the European Union buy the loyalty of North Cyprus?

The Europeans have been imposing a centrifugal agenda for some time in all areas important to Turkey.

They support the economic pressure on the Ankara government, as well as the increase in political pressure also on the Turkish president.

All of this has already led to painful consequences for Turkey, from the devaluation of the Turkish lira, and the sudden and large increase in the past few weeks of cases of Coronavirus throughout the country also helped in the matter, which forced the Turkish government, as we mentioned, to impose a complete closure that will last for more than two weeks.

In an attempt to indicate the position that Ankara has managed in recent years to reach, the European willingness to press one of the points that will be more painful if it is completed.

With the natural Turkish interest in the Turkish Republic of Northern Cyprus, the Turkish president has the right to pose the question this time.

Why is Europe encroaching on Turkish politics, knowing in advance, that at least in general, to be ignorant of using the system of checks and balances, and to work on directly touching the issues and issues of the Turkish state’s structure itself, represented by Turkey’s national sovereignty and the integrity and territorial integrity of Turkey?

What the Europeans are working on, and undoubtedly the United States behind them, is generous European financial support, followed by other powerful temptations that the Turkish Cypriots cannot resist, or at least, from the European Union’s point of view, in exchange for withdrawing them from the Turkish embrace.

Buying Turkish Cypriots, by paying them directly, and the result is… Turkey is expelled from the island permanently and completely.

The EU has already spent over the past two decades a great deal of financial resources, providing more than $ 600 million, to change the opinion of the Turkish Republic of Northern Cyprus, but this Turkish republic has remained loyal to the motherland, Turkey.

Today, with this scheme, which provides new investment plans, providing Covid-19 vaccines to the Turkish Republic of Northern Cyprus and waiving a special status for the goods produced in it and allowing them to enter the European market without hindrance.

The Europeans make promises to certain parties in the Turkish Republic of Northern Cyprus from under the table of equal funding, which was also provided to the Greek side, in addition to using all the European Union “offers” as if they were members of the Union, in exchange for a concession or abandonment of Ankara.

At the same time, Brussels is transmitting a message to the Turkish Republic of Northern Cyprus through all possible channels that Ankara suffers from a severe economic crisis, and therefore lacks the financial resources to develop the island economically, and that Turkey will be isolated internationally sooner or later.

In addition, the European propaganda machine in the Turkish Republic of Northern Cyprus focuses on a set of points, which are summarized as follows:

Diplomatically, the envoys of the head of European diplomacy, Josep Borrell, explain their active contacts with the United Nations and their full support for the organization’s initiatives to bring peace to the region.

In return, the EU can reach the “ceiling of ambitions” of the United Nations by supporting its working methods familiar with the Cypriots in general, without causing any inconvenience or dissatisfaction of any kind among the locals in North Cyprus, who are already accustomed to getting grants from the West in return.

The important step here in the plan is, to work on recruiting and gaining the loyalty of the Turkish elites on the island as well.

It has become clear that this time the European Union, in its attempts to completely get Turkey out of Cyprus, intends to seriously raise the ceiling by offering not only a piece of cake, but a complete, integrated program, the very same that Ankara was fighting and dreamed of obtaining from the Union. European since 1999.

In addition to the upcoming investment programs that contain a big zeros figure, the European Union intends to supply the Turkish in north of the island with a Covid-19 vaccine as a priority, as well as granting the goods produced in it a special status to allow them to pass smoothly to European markets.

The Europeans are behind the scenes, waiting to change the course of the Turkish Cypriots and distance themselves from Ankara.

They promise the elites in Northern Cyprus to provide guaranteed financing at the level of the Greek part of the island, to “pull” the infrastructure and economy, and to access all the benefits of the European Union at the level of member states of the Union.

At the same time, the leadership of the Turkish Republic of Northern Cyprus, through all available channels, is transmitting sophisticated signals that Ankara does not have such resources to develop the island even on an almost similar scale, with the difficult economic situation and the current international situation, Turkey will find itself in isolation.

Their condition says that Ankara is mired in piles of problems, and that it cannot find effective means to restore its economy and fortify its people,

In the end, Erdogan can no longer offer us anything.

The Europeans, on the other hand, offer us a lot, and indeed everything we dream of.

So why reject this generous offer…?

The West has responded skillfully to all Turkey’s problems, from an increase in cases of Coronavirus infection, to reducing Erdogan’s contacts with Europe, the flow of Russian tourists to Turkish resorts, Turkey’s involvement in the Syrian quagmire, the specter of terrorism remaining inside Turkey, fear of earthquakes may diminish at any moment in the largest Turkish city, the presence of fire under the ashes within the military establishment in the country, and now the work comes to persuade northern Cyprus to join the prosperous Europe with all its advantages and valuable gifts.

An offer that cannot be refused, they say.

Will the western offer be more valuable than the crescent and the star, with all the meaning of this symbol?