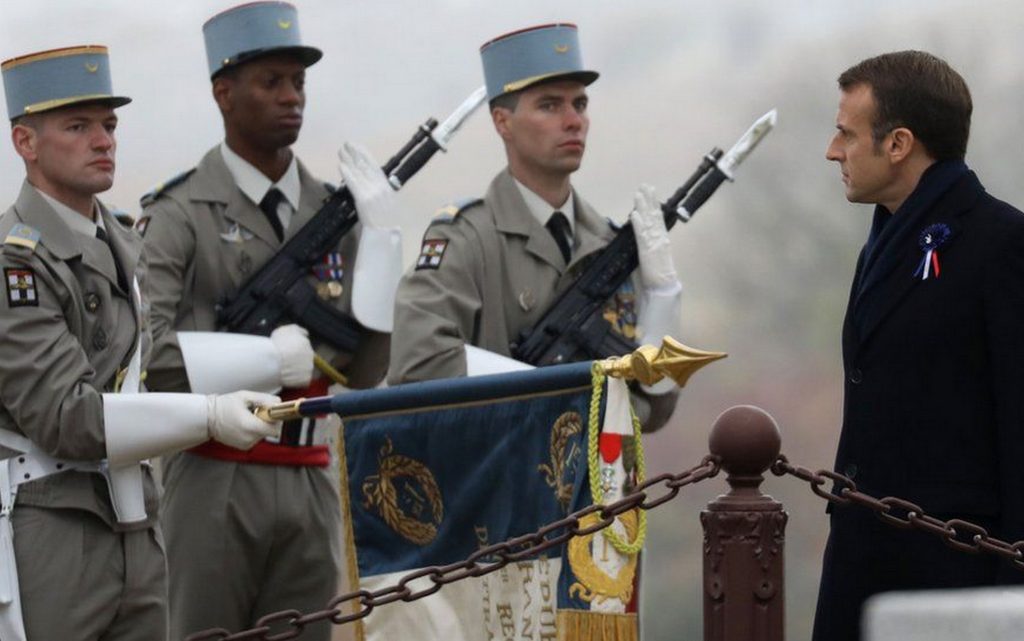 A letter was published by the French military, at the weekly “Valor Actoel” magazine published on Wednesday the article calling on President Emmanuel Macron to defend patriotism, and it was signed by “twenty generals, a hundred high-ranking officers and more than a thousand other soldiers,” according to the magazine.

These militarists condemn the “disintegration” that strikes the homeland and “is manifested, through something of anti-racism, with one goal of creating a state of distress and even hatred between groups,” considering that “a disintegration that leads, with Islamism and the suburban hordes, to the separation of many parts of the nation to turn it into Lands subject to doctrines that are inconsistent with our constitution.

The original source from the link here

OPEN LETTER TO OUR GOVERNORS

Ladies and Gentlemen of the Government,

The hour is serious, France is in danger, several mortal dangers threaten it.

We who, even in retirement, remain soldiers of France, cannot, in the current circumstances, remain indifferent to the fate of our beautiful country.

Our tricolor flags are not just a piece of cloth, they symbolize the tradition, through the ages, of those who, whatever their skin color or their faith, served France and gave their lives for it.

On these flags, we find in gold letters the words “Honor and Fatherland”.

But our honor today lies in the denunciation of the disintegration which strikes our country.

– Discrimination which, through a certain anti-racism, is displayed with a single goal: to create on our soil a malaise, even a hatred between the communities. Today some speak of racialism, indigenism and de-colonial theories, but, through these terms, it is the racial war that these hateful and fanatic partisans want.

They despise our country, its traditions, its culture, and want to see it dissolve by taking away its past and its history.

Thus they attack, through statues, ancient military and civilian glories by analyzing words that are centuries old.

– Discrimination which, with Islamism and the suburban hordes, leads to the detachment of multiple plots of the nation to transform them into territories subject to dogmas contrary to our constitution.

But each Frenchman, whatever his belief or his non-belief, is everywhere at home in France; there cannot and must not exist any city, any district where the laws of the Republic do not apply.

– Discrimination because hatred takes precedence over fraternity during demonstrations where the power uses the police as an auxiliary agent and scapegoat in the face of French people in yellow vests expressing their despair. This while infiltrated and hooded individuals ransack businesses and threaten these same police forces.

Yet the latter only apply the directives, sometimes contradictory, given by you, the rulers.

Perils are mounting, violence is increasing day by day.

Who would have predicted ten years ago that a professor would one day be beheaded when he left college?

However, we, servants of the Nation, who have always been ready to put our skin at the end of our engagement – as our military state demanded, cannot be passive spectators in the face of such actions.

It is therefore imperative that those who lead our country find the courage to eradicate these dangers.

To do this, it is often sufficient to apply existing laws without weakness.

Do not forget that, like us, a large majority of our fellow citizens are overwhelmed by your dabbling and guilty silences.

As Cardinal Mercier, Primate of Belgium, said: “When prudence is everywhere, courage is nowhere.

So, Ladies and Gentlemen, enough procrastination, the hour is serious, the work is colossal; do not waste time and know that we are ready to support policies which will take into consideration the safeguard of the nation.

On the other hand, if nothing is done, laxity will continue to spread inexorably in society, ultimately causing an explosion and the intervention of our active comrades in a perilous mission of protecting our civilizational values ​​and safeguarding of our compatriots on the national territory.

As we can see, it is no longer time to procrastinate otherwise, tomorrow the civil war will put an end to this growing chaos, and the deaths, for which you will bear the responsibility, will number in the thousands.

(Former officer of the Land Army and the Gendarmerie, author of 9 books)

CNE enthusiasm at home (with wings)

Scientist of the Hugo MARMORAT contingent