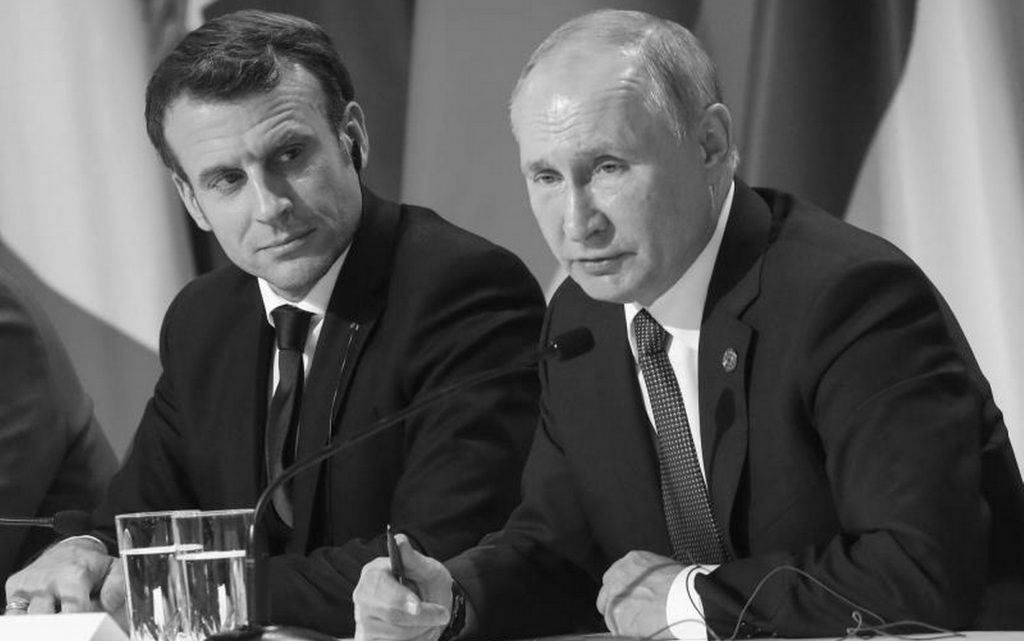 This came in response to a question about the possibility of taking measures against Moscow in the event that its forces invade Ukrainian territory, at a time when Russia is massing increasing forces on the borders and exchanging expulsion of diplomats with Kiev.

In an interview with CBS, excerpts of which were broadcast on Saturday and broadcast in full on Sunday, Macron said that the sanctions are not sufficient and must be accompanied by what he described as a frank, transparent and open dialogue with Moscow, stressing that Russia must be clear in this regard.

The French President expressed his country’s readiness to impose sanctions on Russia if it showed what he described as unacceptable behavior, noting that sanctions constitute “the only way to be credible”.

On Friday, Macron and German Chancellor Angela Merkel confirmed their support for Ukrainian President Volodomir Zelensky, calling on Russia to withdraw its forces from the borders and work quickly to “reduce tension”.

Last Thursday, US President Joe Biden announced the imposition of a series of strict financial sanctions on Russia, in addition to the expulsion of 10 Russian diplomats, at the same time he offered to hold a summit with the Russian President. Washington also imposed sanctions on 8 persons and entities related to the “occupation” of the Crimean Peninsula in Ukraine.

On Saturday, Ukraine decided to expel a Russian diplomat in response to an earlier decision by Moscow to expel Alexander Susunyuk, the Ukrainian consul in St. Petersburg, after it accused him of obtaining classified information from a Russian citizen.

Kiev rejected the accusations that Moscow brought against its consul in Saint Petersburg, denying any connection to collecting classified information about the security services in Russia, and the Ukrainian Foreign Ministry statement condemned the decision to detain the consul for a few hours before his release, accusing Russia of violating the Vienna Convention on Diplomatic Relations signed in 1961.

And the Russian security authorities said earlier Saturday that the Ukrainian consul had been caught “in flagrante delicto during a meeting with a Russian citizen when he was seeking to obtain classified information related to a database of Russian law enforcement agencies”.

Since Moscow annexed Crimea in 2014 and the start of the conflict in eastern Ukraine, Russia has arrested a large number of Ukrainian citizens, accusing them of espionage, but I rarely stopped diplomatically.

The exchange of expulsion of diplomats between Kiev and Moscow coincides with the tense relations between the two sides, after Russia deployed tens of thousands of soldiers on the Ukrainian border to conduct military exercises in the face of moves that pose a “threat” from the North Atlantic Treaty Organization (NATO), which Kiev seeks to join.

For its part, Ukraine said that it feared a Russian invasion, and called on the West to support it, while Moscow denied that moving its forces to conduct maneuvers near the border with Ukraine was a threat to the security of the latter, calling on Kiev to stop carrying out provocative actions.

Relations between Ukraine and Russia have been strained since pro-Western forces came to power in Kiev since 2014, followed by Moscow’s annexation of the Crimean Peninsula, and a war between Kiev forces and pro-Russian separatists in the east, killing more than 13,000 people.

On the field level, the Ukrainian army said that it had detected 16 violations of the ceasefire in the Donbas region (east of the country); But without any casualties, the Ukrainian army added that the pro-Russian separatists fired towards its defensive sites.

Ukrainian army explained that they had submitted a report of these attacks to the Organization for Security and Cooperation in Europe, which is a party to monitor the ceasefire.

For their part, the separatist authorities in Donetsk province (southeastern Ukraine) said that the Ukrainian army had bombed the region 13 times in the last 24 hours.

On Friday, the separatist authorities called for an emergency session of the Contact Group on settling the conflict in southeastern Ukraine.

In a related context, two Russian warships crossed the Bosphorus strait on their way to the Black Sea on Saturday, where 15 other small ships arrived, as part of Moscow’s strengthening of its maritime presence at a time when its relations with the West and Ukraine are increasing in tension.

On Friday, Moscow announced that it would close some areas in the Black Sea near the border with Ukraine as part of the procedures for holding naval exercises, which was condemned by Kiev, Washington and NATO.