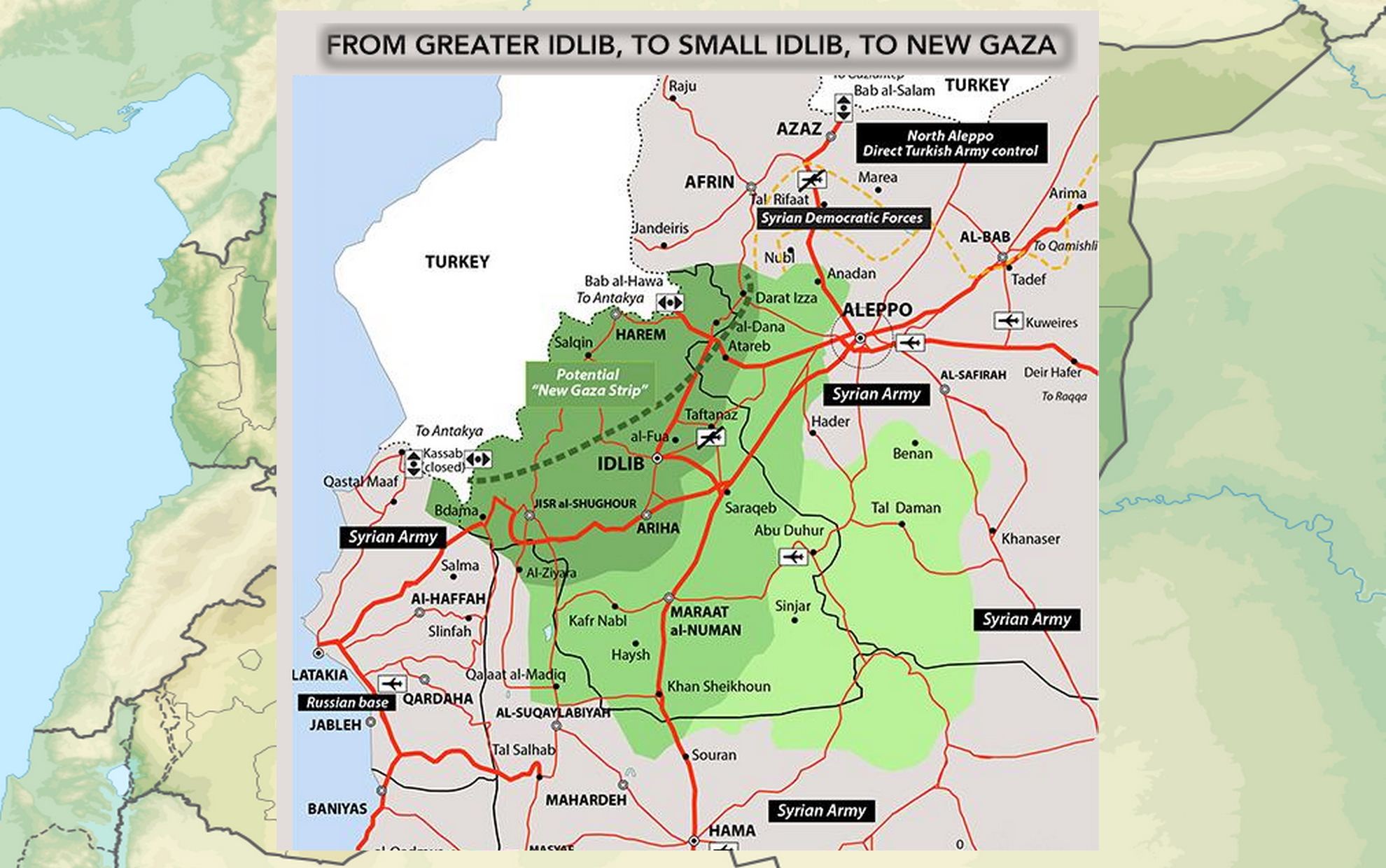 After several military attacks that ended with truce agreements, large parts of Idlib Governorate and its environs in northwestern Syria remain the last most prominent stronghold of jihadist and other opposition factions.

So what does the future hold for a region that is today subject to the Hay’at Tahrir al Sham (formerly al Nusra Front) and in large parts of it to Turkish influence, which has witnessed the largest waves of displacement in the world flow to it?

Idlib governorate has strategic importance, as it borders Turkey, which has gained great influence inside Syria after entering the conflict line in support of the opposition, on the one hand, and Latakia governorate, the stronghold of the Alawite sect to which President Bashar al Assad belongs, on the other hand.

The city of Idlib, the center of the governorate, is located close to the Aleppo-Damascus international road, which for years was a target for the regime forces until, after several attacks, it was able to fully restore it.

Idlib quickly joined the protests when they launched against the regime, starting in March 2011. In 2015, it was controlled by a coalition of opposition and fighting factions, including al Nusra Front at the time, before disengaging from al Qaeda.

However, since the year 2019, the governorate and limited adjacent areas of the governorates of Hama, Aleppo and Latakia have come under the effective control of HTS, before the regime forces gradually advanced in their south after military operations, the last of which was at the end of December 2019.

Consequently, the HTS-controlled areas were reduced to less than half of Idlib.

Since the last attack, a truce agreement has been in force in Idlib governorate, sponsored by Russia – Turkey.

The HTS controls these areas, and through civil institutions that the “Salvation Government” confronted, and its own security and judicial agencies, it organizes the affairs of about three million people, the majority of whom are displaced.

The authority reaps revenues from the movement of goods through the crossings with each of the regime-controlled areas and Turkey.

The number of its fighters is about ten thousand, according to a recent United Nations report indicating that the organization has a monopoly on the distribution of fuel, and the value of its profits is about “one million dollars a month”.

The organization also controls “the distribution of humanitarian aid” and “confiscates part of it to support its clientelistic networks”.

There are also jihadist factions allied with or in conflict with the HTS, and other Islamist or no less influential factions supported by Ankara and its relationship with the HTS is relatively tense.

During the conflict, Idlib attracted fighters of several nationalities, from France, Britain and the Caucasus countries.

Among the jihadist factions, the “Guardians of Religion” organization, which is linked to al Qaeda and has between 2,000 and 2,500 fighters, according to the United Nations.

It includes Syrian and foreign fighters, some of whom have previously fought in Iraq and Afghanistan.

Between three and 4,500 jihadists belong to the Turkestan Islamic Party, the majority of which are from the Uyghur minority in China.

As for the other factions, most of them fall within the “National Army” that Ankara formed from factions loyal to it in northern Syria.

After each attack the regime forces were launching, a truce agreement sponsored by Russia and sometimes Iran, which supports Damascus and Turkey, was followed for a certain period until the game of chess was restarted in Syria.

Turkey deploys thousands of its forces in Idlib during the last attack that preceded the truce agreement currently in force, the regime forces found themselves, after expelling the fighting factions from some areas, in a confrontation with the Turkish forces that led to deaths on both sides.

A Western diplomat told AFP that during the ceasefire “which many thought” would fall, as the agreements that preceded it, “Turkey was heavily involved in Idlib by deploying about 15,000” soldiers.

He believes that Turkey, which hosts about four million Syrian refugees and fears a new wave of displacement to it, will be on the lookout for any new attack, “and this means that the political bets have become more important, in exchange for the decline in the possibility of military action”.

The diplomat does not believe that the future of Idlib will remain the same as its present, that is, a besieged region of unknown fate that is controlled by jihadist groups.

“This is not the most likely scenario,” he says, listing several factors threatening the “status quo”, including “the presence of millions of displaced people, humanitarian issues… and the threat that some terrorist groups pose to Turkey and the West”.

“A new wave of refugees will produce new political, economic and humanitarian challenges” for Turkey, which is trying to “balance” its interest in removing the regime from what remains of Idlib and “preserving its relations with Russia and avoiding any dangerous confrontation”, said researcher in the International Crisis Group, Darren Khalifa.

After the regime forces took control of the Damascus-Aleppo international highway, analysts say that they may seek in any future attack to regain what remains outside their control from the “M4” road that connects the city of Aleppo with Latakia.

And in the event of a new attack, Ankara will ask in return, which may be, according to Balanche, allowing it to “control new Kurdish areas,” after it had seized large border areas in three military operations it launched against Kurdish fighters.

Balanche believes that Idlib may end up as an area “under Turkish protection… controlled by Islamic groups such as Hay’at Tahrir al Sham and managing refugee affairs there”.

In this case, it will be more like, Idlib will be a “new Gaza Strip”.