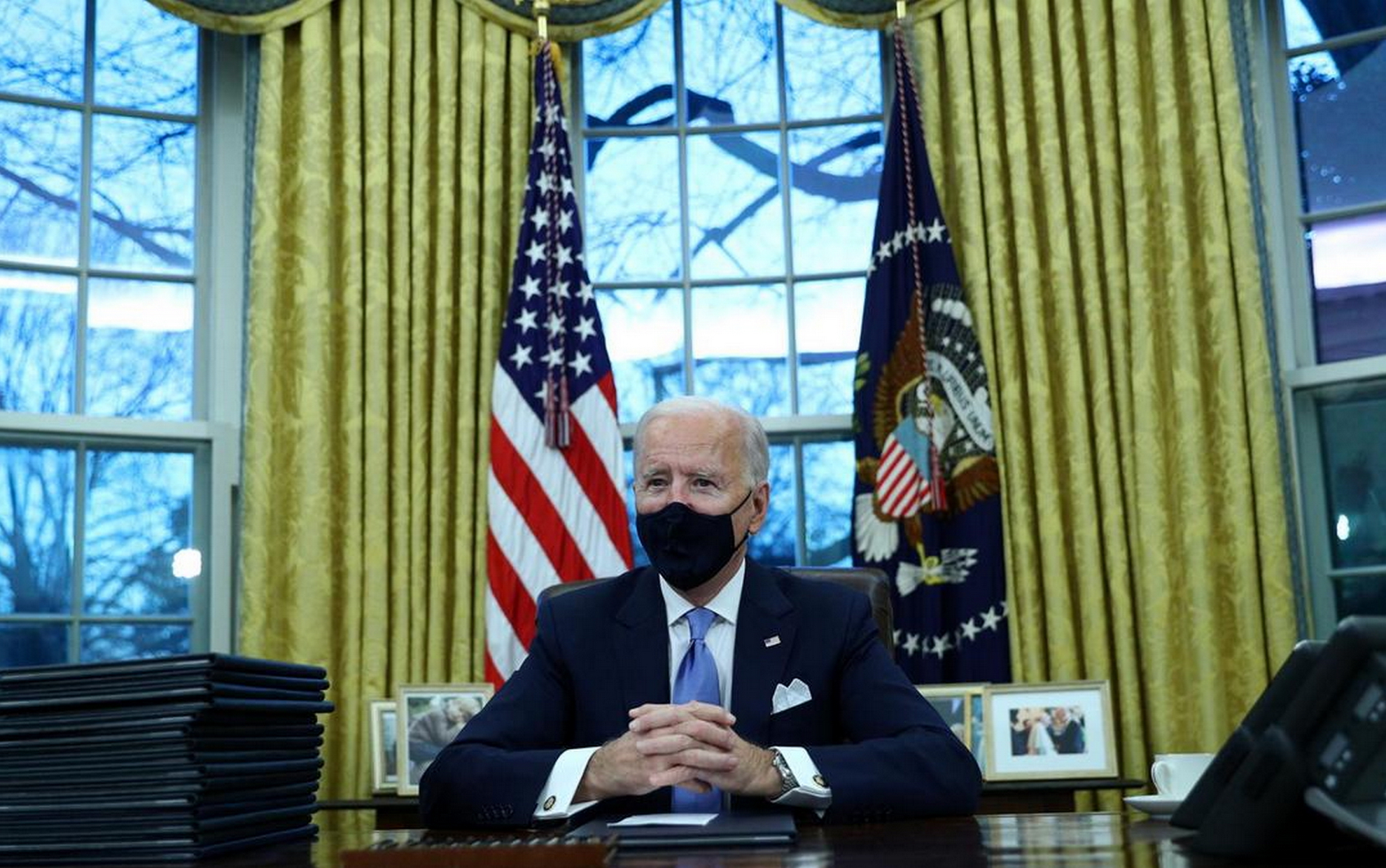 Israeli newspaper reviewed the political features of the positions of the new US administration headed by Joe Biden, towards the occupation in particular and the Middle East region in general.

“Haaretz” explained in an article published by the journalist “Judy Melts”, that the administration of the new US president, Joe Biden, “included a number of well-known personalities of the political level in Israel from the era of Barack Obama and Bill Clinton, including the architects of the nuclear agreement with Iran”.

She pointed out that “changing the administration gives Biden’s men an opportunity to shape US policy towards Israel in particular and the Middle East in general, while their previous actions and statements indicate the line they will follow,” noting that “the new Secretary of State Antony Blinken is the first diplomat in the states.

The United States, drawing the principles that will guide it regarding Israel and its neighbors”.

She said: “Blinken promised that Washington would consult with Tel Aviv and the Gulf states regarding any change in the nuclear agreement, and emphasized that Biden is committed to preventing Iran from accessing nuclear weapons, and made clear that the new administration has no intention of withdrawing from recognizing Jerusalem as the“ capital of Israel ”or returning The embassy is to Tel Aviv, and Blinken blessed the (normalization) agreements between Israel and the Arab countries during the Donald Trump administration, but criticized them with regard to the conflict between Israel and the Palestinians.

Blinken, a son of a Jewish family from New York, stated that “the Biden administration still considers the two-state solution the best, and perhaps the only, way to ensure Israel’s future as a Jewish state,” denying that he “supports a boycott of Israel”.

Haaretz noted that, “After his nomination as Secretary of State last November, Blinken devoted his speech to his Jewish roots, and in the 1990s he held high-ranking positions in the Clinton administration, and between 2002-2008 he was chairman of the Senate Foreign Relations Committee, and at that time he weaved his relationship with him. Biden, then head of the committee.

She pointed out that “he was among the heads of the team of secret negotiations with Iran that led to the nuclear deal, knowing that his political path began in 2008 as an advisor to Hillary Clinton, who competed against Obama within the Democratic Party, and after Obama appointed Clinton as Secretary of State, he was responsible.

From policy planning in her office, as he moved in Obama’s second term to the White House as a national security advisor to Vice President Biden.

Regarding his vision of the nuclear agreement with Tehran, he expressed his support for returning to the agreement and lifting American sanctions on Iran, provided that it applies its share in the agreement, considering that the doctrine of using “greater pressure” on Tehran, which was adopted by the Trump administration, described it as “unrealistic and unrealistic”.

Mark Dovovich, director general of the conservative research institute, the Democracy Protection Fund, confirmed that “he is the most acute person in Iranian affairs”.

As for Sullivan, who was deputy secretary of state in the Obama administration, he is a veteran diplomat, speaking Arabic and served in democratic and republican administrations, including the US ambassador to Russia and Jordan, and the deputy secretary of state for political affairs heading the team of secret negotiations with Iran, and since his resignation from the Foreign Service in 2014, Prince is president of the Carnegie Research Institute for Advancing World Peace.

The newspaper pointed out that Sullivan, in an article he published in the “Washington Post” in 2019, underestimated Trump’s plan to settle the conflict between the Israelis and the Palestinians, even before it was officially presented.

Wendy Sherman, who is the deputy secretary of state, if her appointment is approved, “she will be the first woman to hold the second position in terms of her importance in the Foreign Ministry, and in Israel she is well remembered as having replaced Prince as head of the negotiations team with Iran, and as the deputy foreign minister for political affairs.

Sherman, who was raised in a Jewish home in “Baltimore”, was previously Deputy Secretary of State Warren Christopher for Legislative Affairs, and a senior advisor to Madeleine Albright who replaced Christopher, and was considered “pro-Israel” and expressed her “extreme pain” as a result of “the tension resulting from the agreement between the administration Obama and Israel”.

Regarding “Gordon”, she indicated that “in Obama’s term he held the position of White House policy coordinator in the Middle East, North Africa and the Gulf, and in this position he participated in the elaboration of the nuclear agreement with Iran and in efforts to advance negotiations between the Palestinians and the Israelis, and in recent years he “Senior fellow” at the Council on Foreign Relations in New York, and one of his areas of specialization is the conflict between the Palestinians and the Israelis.

In a speech at the Haaretz peace conference in 2014, Gordon harshly criticized Israel’s treatment of the Palestinians, saying, “How can Israel remain Jewish and democratic, if it continues to control millions of Palestinians in the West Bank?

How will it achieve peace if it is not ready to draw borders, put an end to the occupation and allow sovereignty, security and dignity to the Palestinians?

Gordon admitted that he had been subjected to a “deception”, when he learned in 2015 that Prime Minister Benjamin Netanyahu intends to deliver a speech in Congress against the nuclear deal with Iran, without informing the administration about that, and he wrote at the time: “Our relationship with Israel was very close and transparent, and it did not occur.

In my mind, the prime minister will announce giving a speech in Congress without informing the White House in advance.

Barbara Lev, senior director for Middle East and North Africa affairs at the National Security Council, held the position between 2014-2018 as the US ambassador to the UAE, and previously held senior positions in the US State Department, including the deputy foreign minister for Arab Peninsula and Iraq affairs.

The principal was the US consulate attaché in Jerusalem, and since her resignation, Lev is a research fellow and directs a program on Arab politics at the Washington Institute for Near East Policy.

According to her assessment, Lev said, “Saudi Arabia will not accelerate a normalization agreement with Israel, in the absence of public support for this step”.

She noted that “the Biden administration does not intend to invest great efforts in resuming contacts between Israel and the Palestinians at this stage, and in the meantime it will suffice to improve relations between the United States and the Palestinians, which it considers a point for a good start,” according to what Haaretz reported.

Lev revealed that “the initiative was for the UAE, not for the United States, in the agreement (normalization) that was reached between Abu Dhabi and Tel Aviv”.