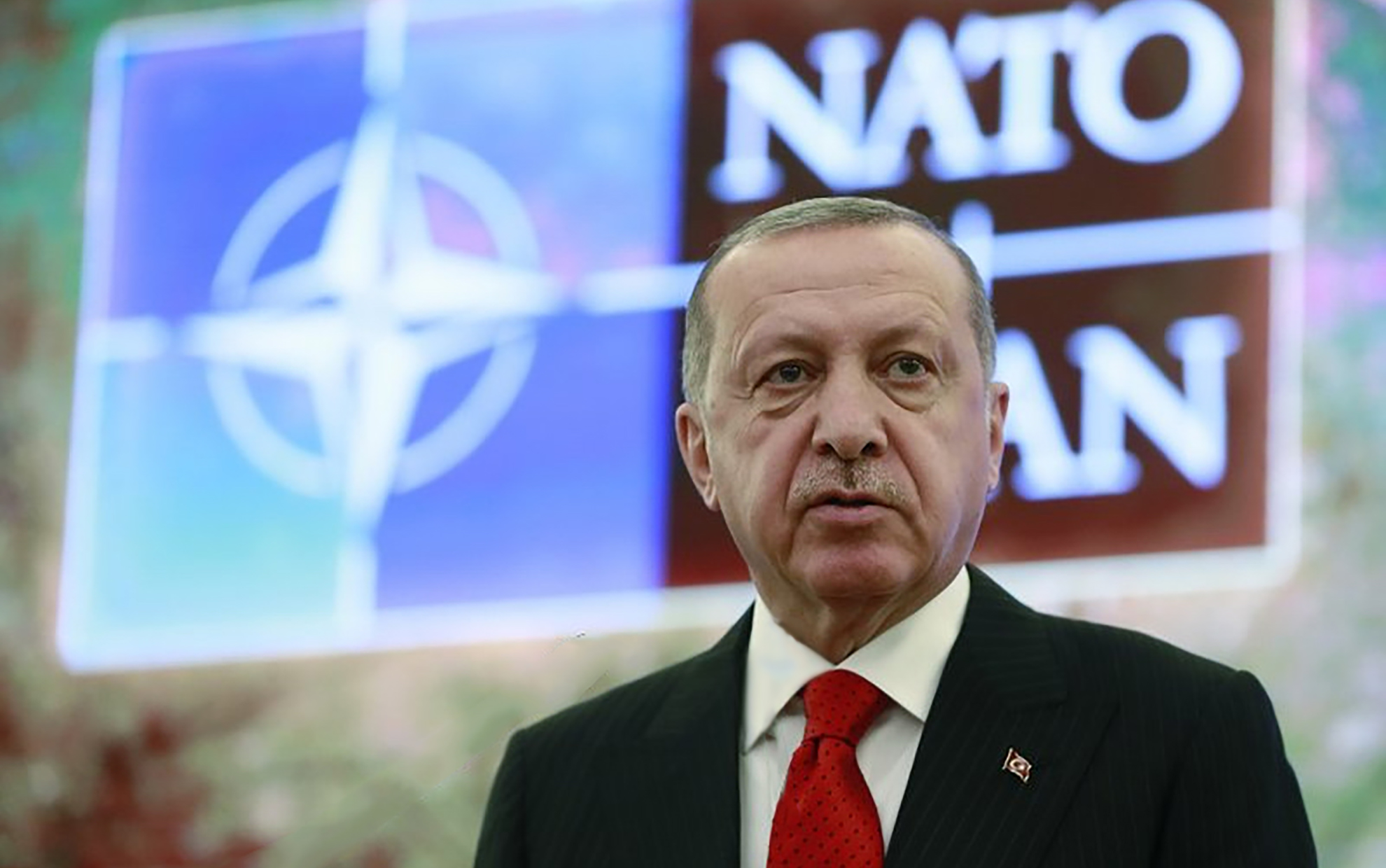 According to the Western press, the tone is rising between Turkish and Russian forces, raising fears of a “dangerous escalation in Idlib”.

The way in which it treats this subject is in total contradiction with what the actors are saying. This contradiction is an opportunity for us to explain our method of analysis.

To make ourselves understood, we will take the example of the “French daily newspaper of reference” Le Monde.

The Franco-German point of view

“In reprisal”, Ankara bombed the Syrian positions and threatens the Europeans 900,000 people have fled the fighting in the last three months.

In its editorial, the daily highlights a platform of 14 European foreign ministers, including the French and German, calling on “the Syrian government and its allies, Russia and Iran, to end their offensive and return to the terms of the 2018 ceasefire agreement reached in Sochi”.

A number of preliminary remarks are in order:

The Syrian soldiers are not those of Bashar Al Assad, but of the Syrian Arab Republic.

President Al Assad is certainly their commander-in-chief, not in his own name but as the democratically elected president by an overwhelming majority of his fellow citizens.

It would not occur to any journalist to speak of the French Army as the ’Army of Emmanuel Macron’.

The 33 Turkish soldiers who were killed are not the cause of the crisis.

It began on February 1st with the assassination in a Turkish ambush of four Russian FSB officers in Aleppo; an event that the French daily never reported on, but which made headlines in the Russian press.

Since then, Turkey has multiplied its provocations towards Russia.

The figure of 900,000 people fleeing the fighting is purely fanciful. Since the beginning of the war against Syria (mid-2012, after the destabilization of the “Arab Spring”), the Western press has been putting forward frightening figures that are denied by the facts.

In reality, it is not possible in a country at war to compile statistics.

They can only be established once peace has returned. No one today is able to quantify the population in the governorate of Idlib.

As if this propaganda were not enough, the editorial highlights a free forum of European ministers.

The first remark is that there were only 14 signatories and not 27.

13 have refused to join. Moreover, most of the signatories, unhappy that their hands were forced, refrained from having it translated into their language and published at home.

These ministers call on Syria, Russia and Iran to stop their offensive.

In the first place, Iran is not participating in this fighting, yet these ministers attribute a responsibility to it and address it.

Secondly, these ministers call on Syria not to free its territory from the foreign jihadists whom they, as Europeans, were supporting militarily until recently under the name of “moderate Islamists”.

Finally, these ministers refer to the Sochi ceasefire, which has never been applied by Turkey. Indeed, it provided for it to separate the “Syrian opposition” from the jihadists so that the former could be protected and the latter fought.

However, here, as elsewhere, there does not seem to be any “Syrian opposition”, only jihadists.

The rest of the editorial is a position paper that provides a better understanding of the simplistic thinking of the newspaper.

It talks about “the determination of Western democracies, their values and their ability to translate their ambitions into military action”; the United States which “has washed its hands of the Syrian problem”; and the paralysis of the Security Council where “Russia, often with the support of China,” “systematically” vetoes.

In other words: we Europeans are Saints, the United States is Pontius Pilate, Russia and China are Evil.

In passing, Le Monde accuses Turkey of threatening “to no longer hold back the refugees from Syria, of whom it already shelters 3.5 million”, which is false. Turkey has threatened to no longer hold back its refugees, including not only Syrians, but also the 800,000 people who have fled the Western destruction of Afghanistan and Iraq.

Finally, the editorial ends with an apology for the French position, which “is finally beginning to put words to the behaviour of Russian forces… guilty of repeated war crimes, also covering up the lies of the Syrian army”.

People who have endured jihadists, ’moderate’ anthropophagiacs and other head cutters for the past eight years will appreciate this.

Journalism is not about saying what you see (from this point of view, almost everything that Le Monde reports here is accurate, except the numbers and responsibilities), but about making it understandable to the public.

Which is the exact opposite of what the editorial staff of the “French daily of reference” does.

For decades, this newspaper – the image of the ruling class it serves – has deliberately concealed essential information from its readers and biased others.

It is impossible to understand anything without first studying, and studying again, the regional context of events and the history of each actor.

As in all sciences, one must constantly question what one believes one has understood and go back to correct one’s mistakes. Finally, it goes without saying that during this work one must disregard one’s sympathies for one or other of the protagonists.

What Le Monde hides from its readers

Let us look back over two decades of incompetence or bad faith: since the attacks of September 11, 2001, the United States has been waging what President Bush called an “endless war”, not against enemies, but against a method of combat, terrorism.

However, it is clear to everyone that far from disappearing, terrorism is on the rise, and wherever they have overthrown an adversary, the situation has only gotten worse.

Since the publication of the Pentagon’s map of the “reshaping of the Middle East”, all states in the region (except Israel and Jordan, which are not involved) know that their best ally wants to dissect them alive.

NATO member Turkey is no exception.

Since its creation, Turkey has had a powerful and efficient administration inherited from the Ottoman Empire.

Its population came from the Mongol hordes that invaded the region, and its founder, Mustafa Kemal, was a victorious warlord, so that the army still has greater prestige and power than civilians.

This is why the totality of Turkey’s foreign policy reversals since it became aware of the US plans is aimed at protecting the country from the voracity of its best ally.

The Turkish General Staff is today persuaded – rightly or wrongly, that is not the question – that after having destroyed Syria, the Pentagon is going to attack its homeland, Turkey.

In the midst of urgency, panic and despair, it has devised a response consisting in threatening all its NATO allies with imminent catastrophe if they let Turkey be destroyed and offering them another battlefield, as far away as possible, in Libya.

Turkey does not know who it is. It contests its borders (Ataturk’s national oath) and its history (it denies having practiced the genocide of non-Muslims), but it does not want to die.

In panic, it cries, shouts, screams like a cornered child.

The deliberate attacks against Russia (assassination of FSB officers on February 1st, meeting with the head of the Tatar militia, meeting with anti-Russian banditry supporters in Ukraine, clashes with the Russian army in Idlib, shooting at Russian reconnaissance planes, drone attack on the Hmeimim base, arrest of journalists of the Russian press agency in Turkey) are not directed against Moscow.

They are means of threatening the United States with the worst cataclysm imaginable: a Third World War, if they do not back down.

Threats to launch columns of refugees on the roads of the European Union are not intended to destabilize the EU.

They are calls for help: if Turkey is destroyed, these flows of migrants will be inevitable, so act before it is too late!

If President Erdogan wanted to go to war with Russia, he would not have taken the initiative to call President Putin on February 4, 12, 21 and 28 and would not have gone out of his way to meet him.

The same President Erdogan, who is not a military man, but a simple civilian from an Islamist militia, did not say anything other than our analysis on 29 February 2020 to the deputies he had gathered at the Palace of Dolmabahce (the former residence of the Sultan):

’The real target of the scenario we are facing is not Syria, but Turkey.

Those who get what they want in Syria will immediately turn their eyes to Turkey.

It is worse than reckless to think that those who have effectively divided Syria into three parts will respect Turkey’s territorial integrity.

Obviously, it is not Le Monde, which has never ceased to support the colonial ambitions of a certain French elite and to promote a revolution in Syria that will translate this direct questioning of US strategy.

The choices of the West

With all due respect, to the editorial staff of Le Monde, the question is not at all the “escalation around Idlib”, which can stop instantly, but whether the NATO member states will let Turkey be destroyed or not.

It is time to stop whining about the unfortunate families of jihadists and take responsibility before a new country is crushed.