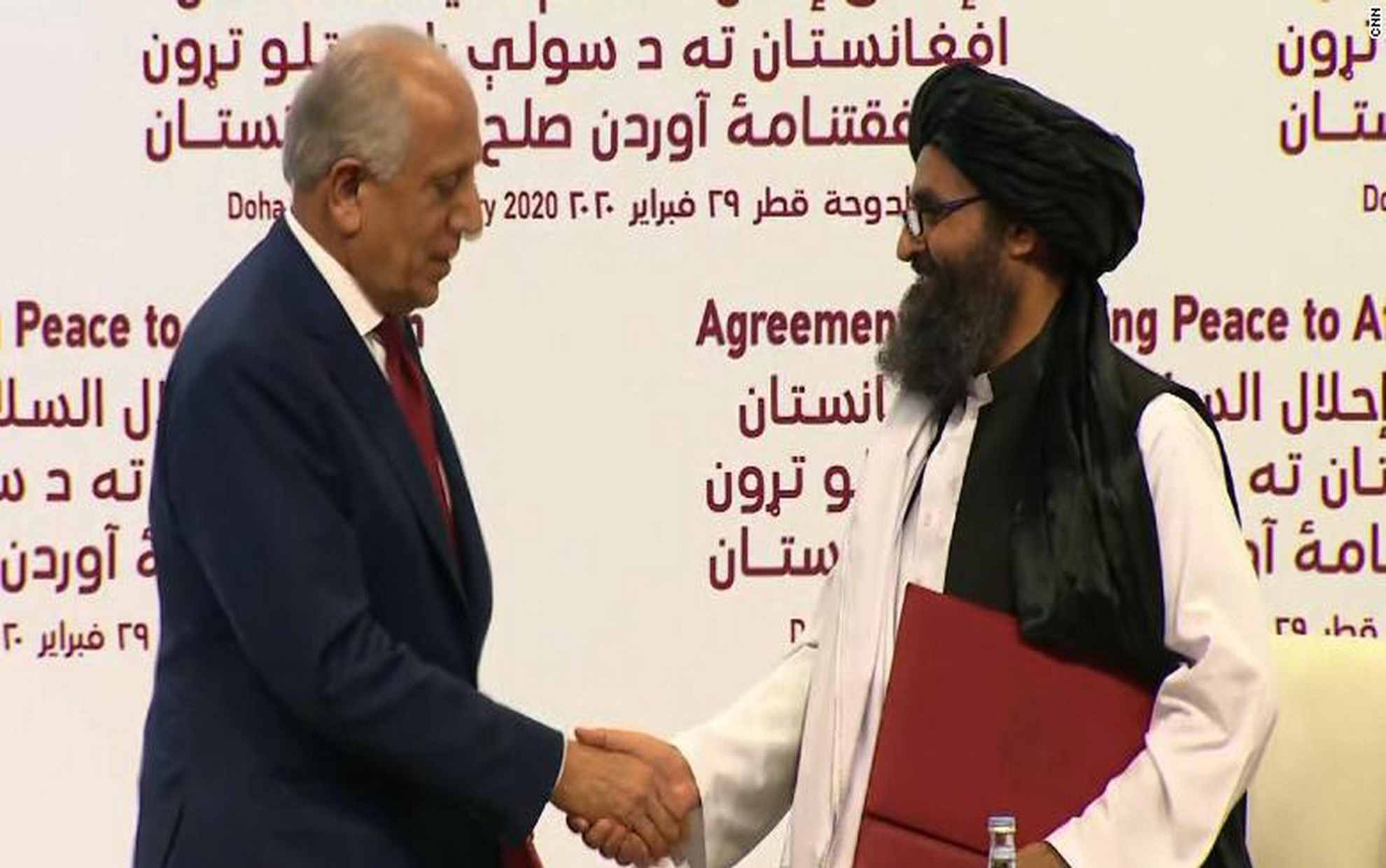 Washington signed a historic agreement with the extremist Taliban in Doha on Saturday to withdraw American soldiers from Afghanistan within a 14-month period, 18 years after the outbreak of the longest wars in US history.

The Afghans hope that the agreement will end four decades of conflict and open the door for dialogue between the Kabul government and the extremist movement with the aim of ending the suffering in the poor country.

US negotiator Zalmay Khalilzad, head of the movement’s political bureau, and its deputy leader Mullah Abdul Ghani Brader, in the presence of US Secretary of State Mark Pompeo and representatives from dozens of countries, signed the agreement.

The two sides shook hands amid shouts of Allah Akbar among the Taliban representatives present.

According to a joint statement by Washington and Kabul, the United States and its allies will withdraw all forces from Afghanistan within 14 months if the Taliban adhere to the security guarantees stipulated in the Doha Agreement.

The American forces will immediately start the process of gradual withdrawal from Afghanistan after the signing of the historic agreement, with the number of soldiers decreasing from 13,000 to 8600 “within a few months”, according to the agreement.

“If the political solution fails and negotiations fail, nothing will force the United States to withdraw its soldiers,” a US official told AFP.

To coincide with the withdrawal process, unprecedented direct peace negotiations between the Taliban and the Kabul authorities are expected to begin by March 10, to complement the agreement signed in Doha, according to US officials.

“The agreement provides for the date of 10 March, but we have to be realistic,” an official told AFP, while another official suggested that negotiations start in the first half of March and be held in Oslo.

According to the officials, the main challenge lies in the difficulty of forming a unified delegation that brings together the Afghan government, the opposition and civil society in light of the existing disputes over the results of the recent presidential elections.

The United States and the Taliban will exchange thousands of prisoners before launching the Afghan negotiations, according to the agreement.

The US Secretary of State urged the Taliban to keep their “promises to cut ties” with Al Qaeda and continue to fight the Islamic State.

“Keep your promises to sever ties with al-Qaeda and other terrorist organizations and continue to fight the Islamic State until victory over it,” Pompeo told representatives of the movement before signing the agreement at a luxury hotel in the Qatari capital.

The Taliban’s reception of Al Qaeda on Afghan soil was the main reason for the US invasion in the wake of the attacks of September 11, 2001.

An international coalition led by the United States expelled the movement from power after the attacks, and the rebels who had ruled Kabul from 1996 to October 2001 carried out continuous attacks that killed more than 2,400 American soldiers and tens of thousands of Afghan security forces.

Washington has spent more than a billion dollars in the war that has killed and injured more than 100,000 Afghan civilians since 2009, according to United Nations figures.

For his part, the North Atlantic Treaty Organization (NATO) welcomed the progress made towards achieving peace in Afghanistan and announced that the agreement between the Taliban and the United States would reduce the long-standing military presence in the country.

To reach a comprehensive peace agreement,” the alliance member states said in a statement.

“We call on the Taliban to seize this opportunity for peace,” the statement added.

He continued, “In this context, the coalition and its partners in the mission of resolute support will implement the amendments based on conditions, including reducing the level of our military presence.”

“NATO allies now expect to start talks inside Afghanistan that will lead to a permanent peace agreement that will end violence, protect human rights, uphold the rule of law and ensure that Afghanistan is not again a safe haven for terrorists,” the statement said.

This is the text of the joint declaration issued by the United States and Afghanistan, on Saturday, on peace in Afghanistan, ahead of the signing ceremony of a peace agreement between Washington and the Taliban in the Qatari capital, Doha.

The Comprehensive and Sustainable Peace Agreement will include 4 parts:

The Islamic Republic of Afghanistan and the United States have been in close partnership since 2001 to respond to threats to international peace and security and to help the Afghan people chart a democratic and prosperous future.

The two countries are committed to their long-term relations and investment to build the Afghan institutions necessary to lay democratic foundations, protect and preserve the country’s unity, and promote social and economic progress and the rights of citizens.

The commitments set out here are made possible by these joint achievements.

Afghan and US security forces share a special bond that has been forged over many years of immense and courageous sacrifice.

The Islamic Republic of Afghanistan welcomes the “violence reduction” period and takes into account the Taliban-United States agreement, an important step towards ending the war.

The Taliban-United States of America agreement paves the way for negotiations between Afghans over a political settlement and a lasting and comprehensive ceasefire with the Taliban.

Moreover, the Islamic Republic of Afghanistan reaffirms its continued commitment to prevent any terrorist groups or individuals, including Al Qaeda and ISIS, from using Afghan soil to threaten the security of the United States, its allies, and other countries.

Accordingly, the Islamic Republic of Afghanistan and the United States have taken the following obligations:

Part One:
The Islamic Republic of Afghanistan and the United States recognize that Al Qaeda, ISIS and other international terrorist groups or individuals continue to use Afghan territory to recruit members, raise funds, train followers and plan, and attempt to launch Attacks threatening the security of the United States, the Allies, and Afghanistan.

To counter this continuing terrorist threat, the Islamic Republic of Afghanistan and the United States will continue to take the following steps to defeat Al Qaeda, its affiliates, and other international terrorist groups and individuals:

Part Two:
The Islamic Republic of Afghanistan and the United States consulted extensively on the levels of US and coalition forces, and the military activities necessary to achieve past commitments, including through support for the Afghan security and defense forces.

In addition, subject to the Taliban’s implementation of its obligations under the United States-Taliban agreement, the Islamic Republic of Afghanistan, the United States, and the coalition jointly, assess the current levels of the military forces as no longer necessary to achieve security goals.

Since 2014, Afghan security forces have been at the forefront of providing security and increasing their effectiveness.

As such, the two parties are obligated to take the following measures: