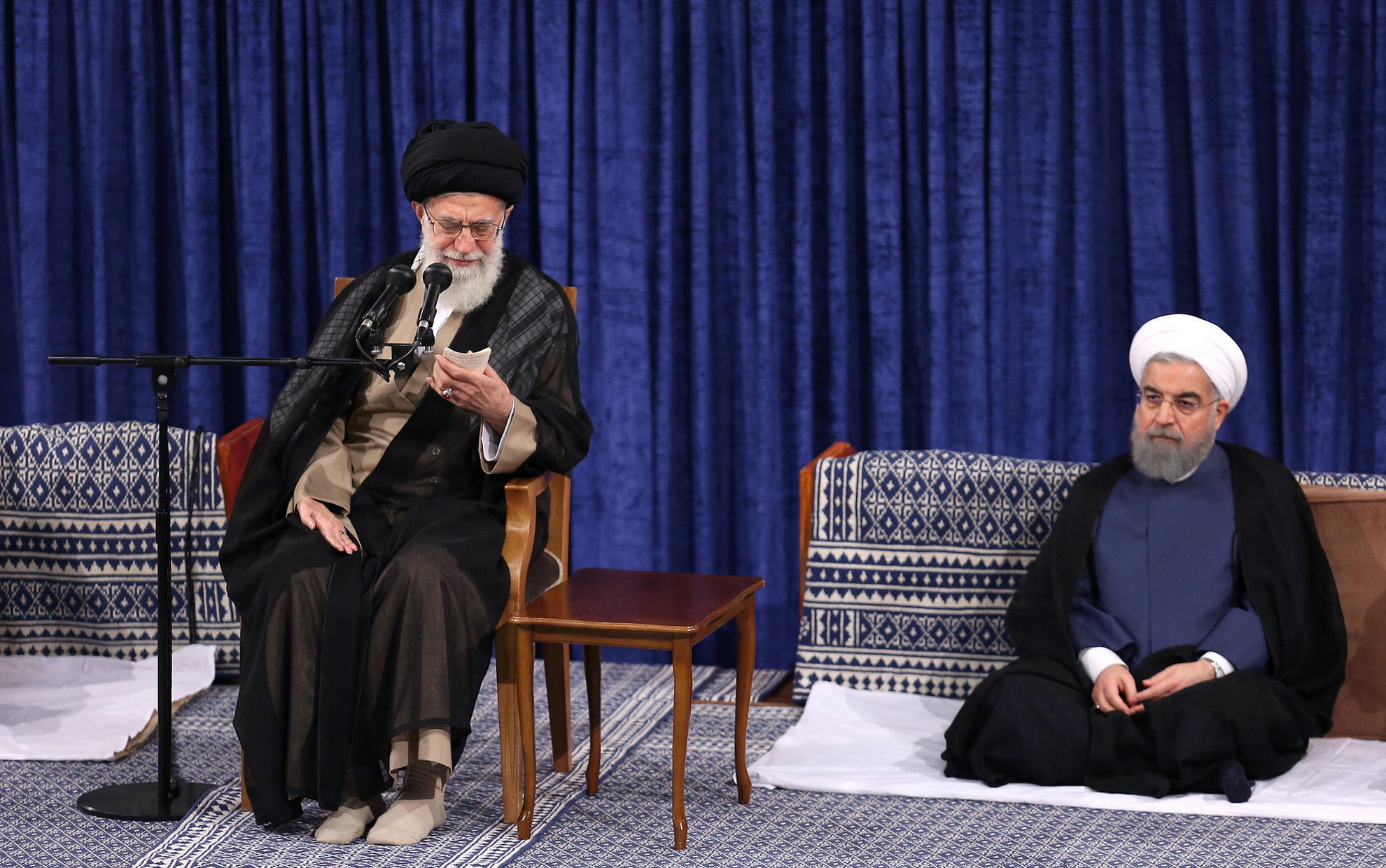 In a statement Friday, Khamenei offered condolences to Suleiman’s relatives and the Iranian people, and said that Suleiman’s work and approach will not stop with his departure, nor will he reach a dead end, adding “a painful revenge that will await criminals”.

For his part, Iranian President Hassan Rouhani said that his country would avenge the killing of Qasim Suleimani, commander of the Quds Force of the Iranian Revolutionary Guards in an American raid in Iraq.

“The banner of pride and steadfastness carried by the martyr General Suleimani will remain raised high by the thousands of Islam soldiers, and the march of sacrifice and proud resistance will continue with greater determination”, the Iranian Islamic Republic News Agency (IRNA) said on Friday, adding that, “the great Iranian people and other free peoples will continue”.

In the region you will definitely take revenge on the criminal America”.

He added, “There is no doubt that this malicious and cowardly measure is another indication of America’s failure and impotence in the region; it indicates the disgust of the people of the region from this aggressor country that violated all principles, humanitarian principles and international rights by adopting the most heinous methods, which recorded another stigma on the pages of its history Shameful”.

Mourning was announced in the country 3 days after Suleiman’s death.

In a related context, Defense Minister Amir Hatami, in a statement, said, “This hideous crime will face a decisive response”.

He added, according to the official IRNA agency, “The blood revenge that was spilled will be taken void by all those involved and the perpetrators of the crime”.

In addition, Israeli media reported that the Israeli caretaker Prime Minister Benjamin Netanyahu would shorten his visit to Greece and return to Israel after the killing of Suleimani.

He also invited Israeli Defense Minister Naftali Bennett to a meeting of heads of the defense establishment at the military headquarters in Tel Aviv to assess the situation with the killing of Suleimani.

In the context of the repercussions of this operation, the Israeli Ministry of Defense ordered the closure of the Mount Hermon ski resort in the Israeli-controlled part of the Syrian Golan Heights today, Friday, amid fears that Iran would retaliate against Israel because of the killing of General Suleiman in a US attack.

Meanwhile, Constantine Kosatchov, head of the International Affairs Committee of the Council of the Russian Federation, described the killing of Qasim Suleimani as “a harbinger of an American Shiite war in Iraq”.

In statements to Russian media, Kucachev considered Suleiman’s assassination “a revenge for the attack on the American embassy in Baghdad” by the PMF in the past few days.

Unfortunately, the response will not be delayed, Kosacov said.

The outbreak of wars is easy, but ending is very difficult.

The Islamic Jihad movement in Palestine also offered condolences to the leader of the Islamic Revolution in Iran, Ali Khamenei, and to the Iranian people, for the martyrdom of Major General Qasim Suleimani, stressing that “we will walk together in the face of this aggression”.

The movement said in a statement on Friday, “Today’s Opinion” reached a copy of it, saying: “With more pride and pride, and with more sadness, the jihad movement mourns a great knowledge, and a leader, so if he did not match him in his position and in his jihad for decades in Palestine and in the region”.

The statement added that the hand of the American-Israeli aggression, the hand of the Great Satan, targeted the martyr Suleimani and he is on the front lines with this demon and rose as a martyr.

The statement continued, “Today, in your name, she calls on the nation, and its flags rise in the face of this aggression, declaring that there is no refraction or retreat, and the resistance movement and its axis will not be confused in the confrontation, and will not hesitate in its march towards its major goals in liberating Palestine and Jerusalem, and on this painful and tragic occasion”.

In turn, the Hamas movement affirmed, in a press release, “Today’s opinion” copied it, that the United States of America bears responsibility for the blood flowing in the Arab region, especially since its aggressive behavior fuels conflicts without any regard for the interests, freedom and stability of peoples.

The statement condemned what she described as “orchids” and the continuing American crimes to sow and sow tension in the region in the service of the criminal Zionist enemy.

The movement added that, as the movement mourns the leader Suleimani and the martyrs of the American raid today, it extends its condolences to the brotherly Iraqi people for the martyrdom of a number of its sons due to the treacherous American raid.

On Friday, missiles in a US operation in Baghdad killed the United States of America called on its citizens to leave Iraq immediately, a few hours after Qasim Suleimani, the commander of the Quds Force, of the Iranian Revolutionary Guard.

Earlier, the US Department of Defense confirmed that Suleimani had been killed in Baghdad, at the direction of President Donald Trump.

The ministry accused Suleimani in a statement that he was working on developing plans to attack American diplomats and staff in Iraq and the region.

The US strike aims to deter future Iranian attack plans, according to the ministry’s statement, which pledged that the United States will continue to take all measures to protect its citizens and interests around the world.

The full text of the statement of the Iranian guide, Ali Khamenei, in the obituary of the commander of the Quds Force in the Iranian Revolutionary Guard, Qasim Suleimani

This is the full text of the statement of condolences to the leader of the Islamic Revolution, Ayatollah Sayyid Ali Khamenei, on the occasion of the martyrdom of Major General Hajj Qasim Suleimani.

In the name of of Allah the Merciful

Here the great banner of Islam and tallness has flown into the heavens.

Last night, the pure souls of the martyrs embraced the pure spirit of Qasim Suleimani.

Years of pure and courageous jihad in the arenas of fighting demons and villains of the world, and the years of those who wished to testify for the sake of God finally reached Suleimani the dear of this noble status, as his pure blood was shed by the hardest human beings on the face of the earth.

I offer the highest verses of blessing to the owner of the times and times, the greatest of God (our souls), and for his pure spirit and my condolences to the Iranian people.

He was a prominent example of the Nahil of Islam and the school of Imam Khomeini, as he spent most of his life striving for God.

Martyrdom has been the reward for his endeavors throughout all these years.

His work and approach will not stop with his departure with the might and power of God and will not reach a dead end, but severe revenge will await criminals whose hands dirty with blood and the blood of other martyrs of the incident last night.

The martyr Suleimani is an international resistance figure, and all his fans are calling for revenge for his blood.

Let all friends – and foes too – know that the path of jihad in resistance will continue with multiple motives, and that the decisive victory will be an ally of the Mujahideen of this blessed path.

The loss of our leader, the sacrifice, is dear and bitter, but the continuation of the struggle and the achievement of the final victory will be bitterer for the killers and criminals.

The Iranian people will honor the name and remembrance of the high-ranking martyr Major General Qasim Suleimani and the martyrs who were with him, especially the great Mujahid of Islam, Mr. Abu Mahdi Al Muhandis.