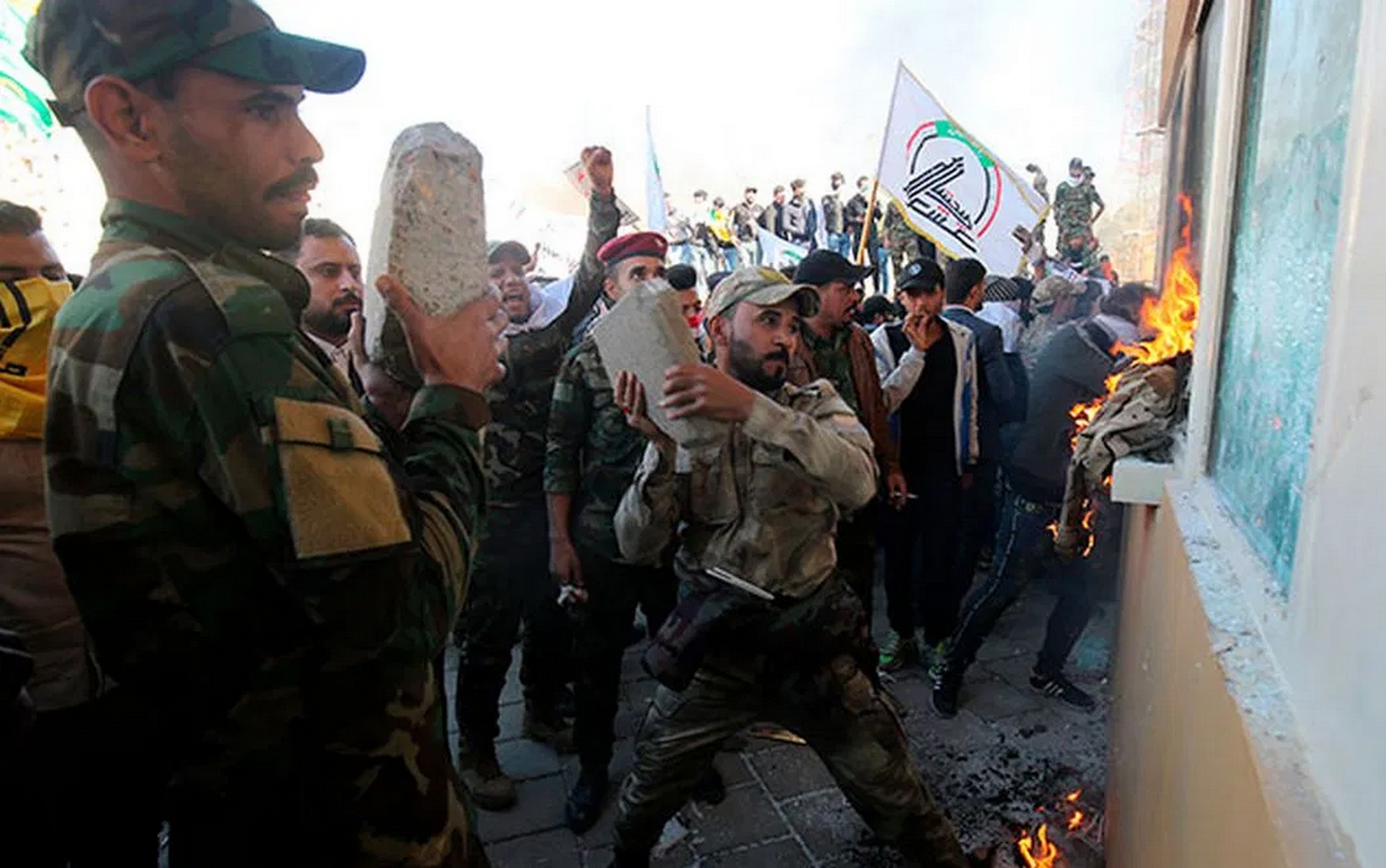 A number of demonstrators supporting the “Hezbollah” brigades gathered in front of the American embassy in Baghdad on Tuesday.

They tried to storm the main gate, burned the American flag, and destroyed the security cameras.

Media sources confirmed that the demonstrators burned an embassy gate and destroyed part of the outer fence.

The protesters raised slogans calling for the closure of the American embassy and the expulsion of the ambassador, while the ambassador and the key employees working at the embassy were evacuated.

The protesters started their movement in the morning by setting up a sit-in tent in front of the embassy, ​​in protest against the American air strikes that targeted the headquarters of Iraqi groups loyal to Iran in both Syria and Iraq, which resulted in dozens of deaths and injuries.

The protesters participating in the funeral procession of the 25 Hezbollah fighters who died in the American raids managed to cross all the checkpoints without difficulty in the heavily fortified Green Zone.

The Pentagon said in an official statement that the missile strikes launched by warplanes targeted five targets belonging to the pro-Iranian “Hezbollah Brigades”, which is closely related to the “Revolutionary Guards”, which Washington included on the terrorist list months ago.

For his part, the Iraqi Prime Minister, Adel Abdul Mahdi, said that the US Secretary of Defense informed him of the air strikes by phone hours before, and that he requested direct discussions, but he was informed that the decision had been taken, according to multiple media reports.

The Iraqi Prime Minister indicated that he had tried to inform the Iraqi faction of the impending air strike, and also emphasized that the American aircraft that carried out the strike did not come from inside Iraq, and that the attack was not based on evidence, but rather was a result of the escalating tension between Iran and America.

On Monday, December 30, the United States of America accused the Iraqi authorities of “not making the necessary efforts to protect the interests of the United States”, in the wake of the American strikes that sparked a wave of condemnation in Iraq.

“We have repeatedly warned the Iraqi government and shared information with us to try to work with it and inform it of its responsibility to protect us as guests”, a senior State Department official told reporters in Washington.

The official reminded that the American army and American diplomats are present in Iraq “at the invitation of the Iraqi government”, and he continued, “It is its responsibility and duty to protect us”.

It has not taken appropriate steps”.