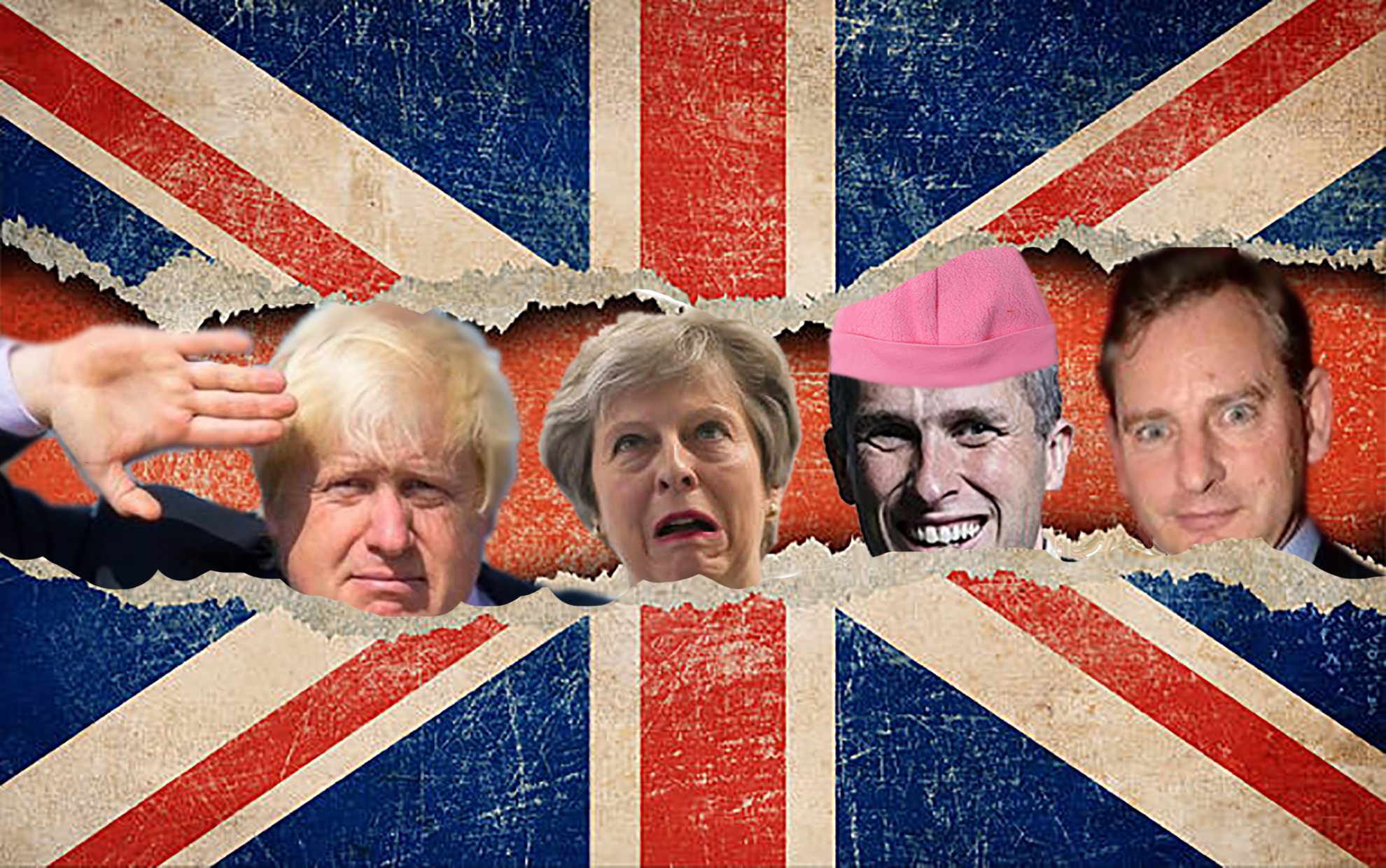 It’s hardly for time to pass us without the United Kingdom bless us with its new masterpieces, whether it be a statement by some of its figures or doing something with the result is always became just another proof that what was called «The empire on which the sun never sets» is in itself the greatest disaster for humanity.

Britain continues to play its destructive role in the world as it always used to do, not only by direct intervention but also by presenting some of its idiots with all its known British arrogance, with some despicable statements & misconducts.

In this worst verge of time in our life, Britain reached so low level in its leadership in time that the so called Great Britain has become so tumbling & it’s just waiting for someone to shot the last bullet, coup de grace “blow of mercy” on its head to relief itself along with its people from its miseries.

Under the current British government, led by a wicked woman who has already come to power after the results of the British exit from the European Union referendum in June 2016, when her predecessor who was not that good as well, failed in his attempt to keep his government due to the referendum results in which 17.4 million people (51.9%) voted for exit from the European Union, while 16.1 million (48.1% were in favor of staying in the EU.

After that result, the phrase of BREXIT become symbol of the new British government that was formed including a group of some weird people who could be described as mentally retarded at best.

I previously wrote about the prime minister and some members of her government in Syrializm.com, so for now there is really no need to write more about them.

Today, It’s clear that what has become known as BREXIT failed miserably in the shadow of the British government’s failure & its inability to reach an agreement with the European Union that protects the British economy & its interests.

In fact, the British people should have really looking painfully with tears in their eyes into the days of Winston Churchill, Margaret Thatcher & many other famous figures who run the UK in tough times with all capability & strength, despite the colonial destructive role which UK played trough all its history.

If the current British government were to lead Britain in World War II time, the Third Reich flag would waved over Buckingham Palace, with 10 Downing Street became a German pig barn today.

The failure of the current British government to reach an agreement with the European Union began to fast the collapse of the government with many of its main original names already left it.

Even British citizens who voted in favor of exit from the European Union in the referendum are now become a staunch supporter of Britain’s survival in the European Union, while them witnessing a horror movie for the past two years of what will happen to their country if they left the EU in wrong way.

Apart from the BREXIT story with the failure of the British government to deal with its consequences, Britain has continued to follow the US policies & now they’re more dependent on the United States than ever.

I personally came to believe that Britain, which once was colonizing America, it become a US colony.

It’s no surprise that we might see, for example, the US President Donald Trump, visit Britain & meet the old queen, will slaps her butt, or even grab her by the p@#&$ some day.

Of course, you can always relay on Russia to cover up all your failures.

Sure is, describing Russia with all the characteristics of evil & aggression, demonizing Putin has become normal move these days from any side in the west in general.

The British position from Russia away from going into the case of the Spy Skripal, Britain didn’t spare an effort & seize or even fabricate any story to lead a fierce campaign against Russia.

In fact, I understand these British attitudes toward Russia, because their failure to address the pressing issues of concern to the country & its citizens will only leave them no choice but to find the easiest way to evade their responsibilities towards their people by creating external crises to divert attention from their failure & turn the attention to the virtual devil that is always ready to play the role of the villain who threat the international peace, democracy & human rights!

«The Soviet Union in the past, Mother Russia today»!

Yes, Russia is always ready to play the role of the villain!!!

What a boring story!!!

Do the rulers of the Western countries think that Russia has enough time to waste it in the West’s delusions, to enter into conflicts that serve only provide free service to relief the failing western governments that couldn’t solve their country’s problems, just to shift the attention of their people at the supposed Russian danger at a time when their people should hold their governments in Europe & the United States accountable for their failure to fulfill their promises to solve their country’s problems & create better opportunities & decent life for their people as they say during their elections campaigns.

Why all this mockery of human intelligence?

Why do some in the west keep thinking that Russia is led by men whose IQ level doesn’t exceed 28% & what a coincidence it’s the same approval rating percentage that the current British government has these days according to British recent surveys?

We’re barely trying to end & stop talking about the current British government figures & move on with our lives to mind with our own business… but nooooo… Britain is insisting to give us more to talk about.

Now we picked up a new British character that entered the world of the exotic creatures that leads Britain today.

A few days ago, the new Chief of Staff of «Her majesty» British Army came out & of course he was just another arrogant British figure who still thinks that he lead an imperial army!

A few days ago & again what a coincidence just before that piracy operation by the Ukrainian navy on the Russian territorial waters occur, as if his words were the signal for his Ukrainian disciples to start the provocation on behalf of the West against Russia.

Gen. Mark Carlton Smith, the new chief of staff of the British army, told British Daily Telegraph that “… here I convey what he said literally & honestly”, General Smith said, “Russia poses a danger to Britain, Europe & the West more than terrorist organizations such as Al Qaeda & ISIL, so that London should develop its defense mechanisms against the unconventional war waged by Moscow against the west in general & the European continent in particular”.

The British general warned of “the Russian threat” against British & allied countries security.

He explained that Moscow was trying to exploit the gaps to wage unconventional wars in the real & cyber spheres.

“Russia has proved that it’s ready to use military force to secure & expand its own national interests, as the Russians seek to exploit weakness wherever they discover it”, he said.

To confirm his fears, he mentioned the assassination attempt of spy Sergey Scrippal on British territory, in which London quickly pointed fingers at Moscow, sparking a diplomatic crisis between the two countries.

In fact, I support the words of the new British chief of staff on the fact that the real threat to the West lies in Russia, not any terrorist organizations, because Russia is the traditional enemy of the west, it was & will remain in every sick mind in the west.

The terrorist organizations such as Al Qaeda & the so called the Islamic State have never been & will not be enemies of the west because they are simply their own creation.

The words of General Smith & his British habit, proved that these organizations will not be a threat to the west & all previous attacks or even the next to come is just an excuse that will be used to justify the interference in other countries in the world for occupation & theft these countries wealth, also distorting the Islamic faith by creating criminal groups fighting in the name of Islam & acts barbarically to tell the world that Islam is the faith of bad people.

These acts remind us of what were the colonial countries, led by Britain committed in countries in Asia & Africa.

Many countries in the world today are still experiencing crises, wars & blood because of the abominable crimes & acts committed by Britain.

There is no country that was occupied by Britain that we know today without tragedies of ethnic & religious differences, massacres, border disputes that caused wars between many countries; even the Arab-Israeli conflict is also caused by Britain.

It is very shameful for a man who assumes that he is an officer in a high position in a supposedly modern (respected) army to make such statements as those made by the new British chief of staff.

It is really insulting to ridicule the minds of people & disrespect human Intelligence, to come out with those hollow statements that haven’t proved to us but that country like Britain is the snake head of all crises in the world.

In fact, if I start to narrate & respond to the British Chief of Staff, I may need to write thousands of lines & dozens of hours of broadcast on YouTube & honestly I’ll not end describing the reality of Britain & its shameful present & history.

Thus, most I can conclude is this:

Britain must wake up from those naïve dreams & deal realistically with its issues at its real size that UK is.

You’re not an empire anymore, so wake up!!!

All the crises & tragedies that Britain caused to mankind, which we still suffer to this day, must be solved by responsible side.

So, either UK give up its shallow arrogant & cooperate with the international family including Russia the primary side in, to solve the world problems in order to reach some peace, or, shut the hell up, stand aside, deal with your domestic issues which still you fail to deal with & let who is really appreciate responsibility & cherish it, the side who have real ability to deal with these problems & work to solve them accordingly.

The fact of Britain, was described by the late former French President General de Gaulle as he said “if Britain sneezes, Europe will have flu”, is in fact quite true.

Britain is the real epidemic that has afflicted mankind.

Britain has to get out of the world of James Bond, its version of G.I Joe & Rambo roles simulation & stay on Johnny English & Mr. Bean level at best.

Those are the normal roles.