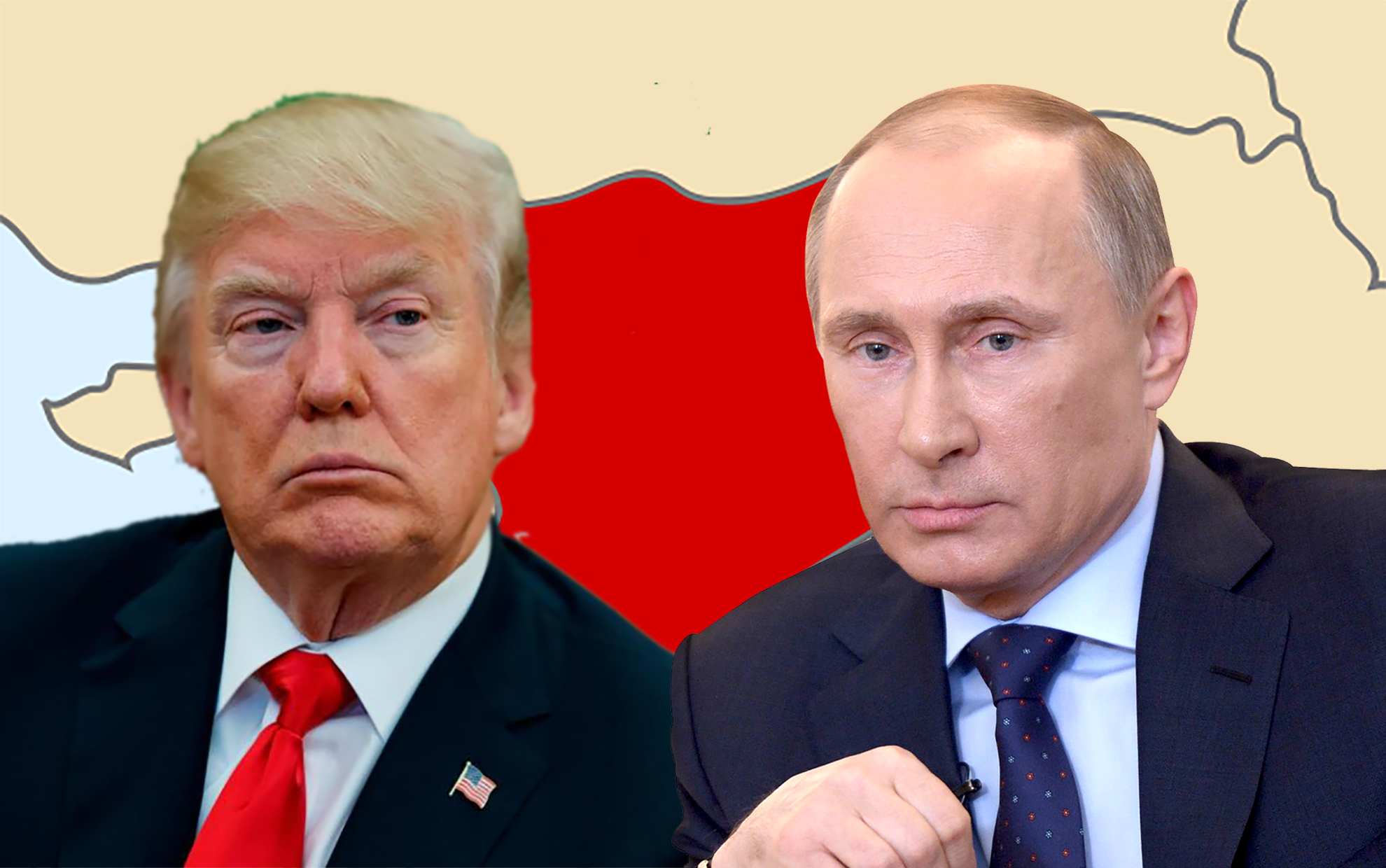 It is with prudence and determination that the Russian Federation and President Trump put a definitive end to the domination of the world by transnational interests.

Convinced that the balance of powers does not depend on their economics but rather on their military capacities, President Putin has certainly reinvigorated the quality of life for his compatriots, but he developed the Red Army before making the Russians rich.

On 1 March, he revealed to the world the principal weapons in his arsenal and the beginning of his program for economic development.

In the days that followed, the war was concentrated in the Eastern Ghouta.

Russian Chief of Staff General Valery Gerasimov telephoned his US counterpart, General Joseph Dunford, and told him that in the case of US military intervention, Russian forces would target the 53 US ships in the Mediterranean and the Gulf, including their nuclear-powered aircraft carriers. Above all, he requested that President Trump be made aware of his country’s new military capacities.

Finally, the United States allowed the Syrian Army and a few Russian infantry-men to free the Ghouta of the jihadists who occupied it.

Only the United Kingdom attempted to anticipate events by organizing the «Skripal affair» – if the current world order were to collapse, we would once again have to employ the rhetoric of the Cold War, which set the kindly cowboys against the big bad Russian Bears.

In June, when the Syrian Army, supported by the Russian Air Force, moved into the South of the country, the US embassy in Jordan warned the jihadists that as from now, they would have to defend themselves alone, without the aid or the support of the Pentagon and the CIA.

On 16 July in Helsinki, Presidents Putin and Trump went a lot further.

They broached the subject of reconstruction, in other words, war damage. Donald Trump, as we have been writing here for the last two years, is opposed to the Puritan ideology, financial capitalism and the imperialism which is a direct result.

He rightly assumes that his country is in no way obliged to bear the consequences of the crimes of his predecessors, of which his people had also been victims.

He affirms that these crimes had been committed at the instigation, and for the profit, of the elite transnational financiers.

He therefore considers that it is for them to pay, even though no-one knows precisely how to make them do so.

The two Presidents also agreed to facilitate the return of the refugees. By doing so, Donald Trump overthrew the rhetoric of his predecessor, according to which they were escaping «dictatorial repression» and not the invasion by the jihadists.

While in the South of the country, the jihadists were themselves fleeing before the Syrian and Russian forces, and a few desperate units of Daesh were committing unimaginable atrocities, the Russian Minister for Foreign Affairs, Sergey Lavrov, and the Russian Chief of Staff, Valery Gerasimov, undertook a tour of Europe and the Middle East.

They were welcomed as discreetly as possible in the European Union.

Indeed, according to the Western narrative, General Gerasimov is a conquistador who invaded and annexed Crimea.

He is therefore forbidden access to the Union, a self-proclaimed defender of the «rule of law».

Unfortunately, since it was too late to remove his name from the list of sanctions, the Union decided to close its eyes to the grand principles and make an exception, allowing a visit by the hero of the reunification of Crimea and Russia.

The shame which swamped the West-European leaders when faced with their own hypocrisy may explain the absence of official photographs of the hearings for the Russian delegation.

The Russian delegation resumed for each of its interlocutors a few of the decisions taken at the Helsinki Summit.

Acting wisely, it abstained from asking for accounts concerning the role of each state during the war, calling on them only to help end it – withdrawal of the Special Forces, cessation of the secret war, suppression of the aid to the jihadists, return of the refugees, reopening of the embassies.

In particular, it confirmed that everyone could participate in the reconstruction, all inclusive.

As soon as the delegation left, Chancellor Angela Merkel and President Emmanuel Macron craftily interrogated the Pentagon in order to find out if it was true that President Donald Trump intended to make certain transnational companies pay (KKR, Lafarge, etc.) – just to destabilize the folks on the other side of the Atlantic.

The attitude of President Macron, ex-bank executive, is all the more deplorable in that he tried to symbolize his good faith by offering 44 tones of humanitarian aid to the Syrian population, transmitted by the Russian army.

In the Middle East, the visit by the Russian delegation was more widely covered by the media.

Lavrov and Gerasimov were able to announce the creation of five committees for the return of the refugees. Each committee, in Egypt, Lebanon, Turkey, Iraq and Jordan, includes representatives of the host state, together with Russian and Syrian delegates.

Yet no-one dared to ask the hard question – why would a committee like this not include the European Union?

What was left was the Israeli preoccupation with obtaining Syria’s departure from the Iranian military advisors and the pro-Iranian militias, including Hezbollah.

Prime Minister Benjamin Netanyahu multiplied his return trips to and from Moscow and Sochi in order to defend his cause.

We may remember that Gerasimov had ironized about the nerve of the beaten Israelis demanding the removal of the Iranian victors.

As for Lavrov, he diplomatically ducked behind a refuse de Principe concerning interference in Syria’s sovereignty.

Russia solved the problem – Russian military police re-installed UNO forces along the line of demarcation between Syria and Israel, from which they had been ejected four years ago.

During this whole period, they were replaced by Al Qaida, supported by Tsahal.

Behind the line of demarcation, in Syrian territory, Russia has also installed eight military observation posts. In this way, Moscow can guarantee both to the UNO and Syria that the jihadists will not come back, and to Israel that Iran will not attack from Syria.

Israel, which until now had been betting on the defeat of the Syrian Arab Republic, and qualified its President as a «butcher», suddenly admitted by the voice of its Minister for Defense, Avigdor Lieberman, that Syria was the victor of the conflict, and that President Assad was its legitimate head.

In order to demonstrate his good will, Lieberman ordered the bombing of a group of Daesh jihadists that until now he had kept in reserve.

Little by little, the Russian Federation and the White House are putting some order into international relations, and convincing various protagonists to withdraw from the war, and even to offer bids for the reconstruction.

From its side, the Syrian Army continues the liberation of it territory.

It remains for President Trump to manage to withdraw his troops from the South (Al-Tanf) and the North of the country (East of the Euphrates), and for President Erdogan to abandon the jihadist refugees in the North-West (Idlib) to their destiny.