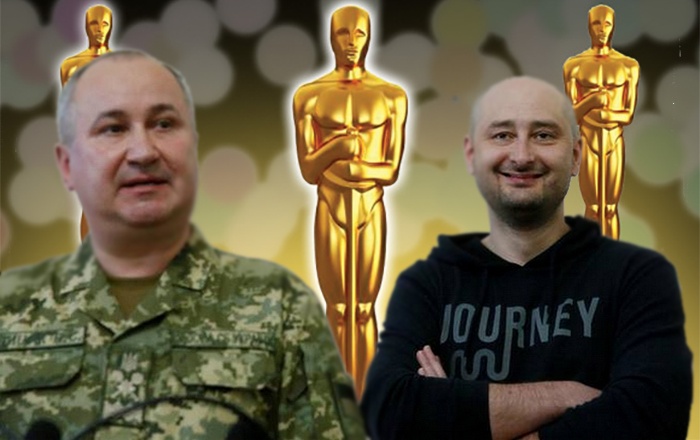 Due to lack of action stars that Hollywood is suffering apparently, auditioning for new comers to silver screen went to Ukraine, with the need of fresh faces with real Innate talent & some real practical experience won’t hurt, in order shake things up in box office.

Well Hollywood don’t go far … because our «Hero» «Arkady Babchenko» is the perfect choice for you & he has his own cast as well!

Players for all the rolls, photographers, graphics, makeup, stunts & brilliant scenario writers with real «Hot Stuff» director that Oliver Stone can fit easily in his pocket.

A Russian/perhaps Ukrainian journalist from Ukrainian father, Arkady Babchenko who was born in Moscow in March 1977.

I want to talk directly to Mr. Babchenko with me following lines.

Mr. Babchenko, you served in the Russian army at the age of 18, serving in first Chechen War 1995 in Russian communication corps & then you volunteered for six months during the Second Chechen War in 2000.

My question to you why?

I know that during the first war you’ve been conscripted to serve in the army, because as a Caucasian I know for fact that no one like you will go voluntarily with his two feet to a true hell on earth.

For someone like you & if the Chechens caught you, they’d make a nice Italian style pasta out of you.

You do really amaze me by volunteering to go for more six months in Second Hell on earth which is the second Chechen war!

May I ask you Why?

Are you that brave & patriot to serve again, did you go to second Chechen war after you’ve been in the first one?

Is it the money or ther is something else that push someone like you to go their again?

You don’t have anything to do in your boring life, so you’ve decided to go again to the same place that you’ve been conscripted to before.

I’ll not apologize for any impropriate words that might be using, because I personally got sick to my stomach & really tired of these stories.

We had enough of these childish games & it’s time for somebody to speak very loud without no boundaries of any kind.

I’m not going to go further with your CV & I want to point direct fingers at your face.

What interested me the most is that you published articles and reports on possible tactics during demonstrations in order to demand free and fair elections in 2012.

May I ask why again?

Are you looking for «Arab Spring» in Russia, you want to see sciences of Libya & Syria in Russia.

Is there is someone using people like you to create Chaos?

What is your role in the events in Ukraine’s demonstrations?

I believe that you’re opposing the Russian government & the policies of the Russian President Vladimir Putin, just like most of the western countries.

Well, nobody cares about that, to be honest with you & no one gives a shit about being opposing Putin or not.

You’ve all the right to say & do whatever you want to do in your pathetic life.

Trust me, when I tell you this, nobody wants to kill you & if the Russian governments want you dead, it will be an easy & simple for them, by just leaving you alive.

Because with your mind set & the high IQ of the Ukrainian authorities there is no need for anyone to bother to kill you.

The thing that I’m trying to understand, what is with this acting scene that we saw, by pretending death, that the Russian assassinated you & later the students of Ethan Hunt, James bond… or should I say Johnny English, come up with this Hollywood action scene.

Really BRAVO… you & your Ukrainian Intelligence passed the MI5 & the MI6 with this!!!

Nice try JIMBO, we just trying to move along with Skripal story with the British Intelligence geniuses & really there is no time to get with this Ukrainian usual nonsense.

A state of nonsense had become a way of life in Ukraine with the current Mafia government.

Is it become so easy & obvious that using anything & everything to demonize Russia?

Do you really think that the Russian Intelligence are that stupid if they wants to kill someone in a «Supposed» Behind Enemy line, will take the risk & go trace & follow until the zero hour, assassinating the supposed target leave him without them being crystal clear that he’s dead, then leave with no trace????

Are you people that stupid, if you died in a suspicious way, the entire fingers of the world especially in these certain times will pointed directly towards Russia.

I mean your Ukrainian Intelligence came out with this fascinating scenario to accuse Russia with your potential murder.

My dear Babchenko, trust me when I tell you this, with those type of people that are around you, you’re really in danger, if you think that there is somebody wants to kill you.

I advise you to stay where you’re residing in Czech Republic & by the way may I ask you why you’re traveling constantly to Israel?

Is Ukraine now became the heaven of free speech & journalists?

The authorities of Ukraine don’t often recall the values of democracy & freedom of speech, with more than 60 journalists disliked by Kiev were detained & the investigation of the murder of their colleague Pavel Sheremet who died in a car explosion in downtown Kyiv in July 2016 & the investigations of his death didn’t move a foot for two years.

You better be thank this awesome power that resurrected you really & one more question, please excuse me for asking you a lot of questions.

While you’re dead, did you see that light that usually people who came from death are telling about?

Is there anyone in the afterlife that you’ve managed to see & talk to?

Who he or she was, Pierce Brosnan … Oh yes he’s still alive … sorry.

I hope they don’t Accuse Russia if somebody tried to murder him to!

In psychology, there is a case that fits the symptoms that apply to you.

Well good luck with that & to make it easier to you all, go find a real good psychiatrist, because the case that you all are suffering from is really hopeless & It’s really explains why this problem with that Mafia group that rule Kiev will not be solved as long as the people of Ukraine are still having faith with bunch of thugs & lunatics that Poroshenko & his group are.