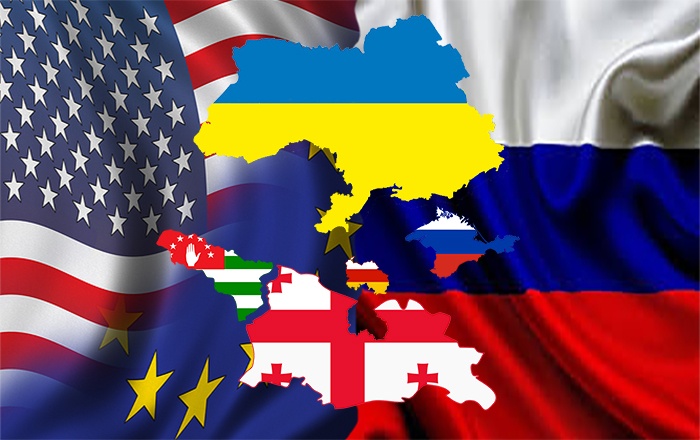 These two countries are the perfect example for the rebellion & the retaliation on the facts of history & geography.

Since the collapse of the Soviet Union after 1991 & the beginning of the disintegration of its republics, 15 former Soviet republics have gained their independence, with most eastern Europe former soviet republics are now part of the European Union & even they’re NATO members!

There are at least two issues at the current stage that must be settled with final word as closing chapter that ends all unneeded debate & without Western countries interfering in the internal affairs of the republics in the region that were under the Soviet Union.

First, Crimea and international recognition of Abkhazia & South Ossetia independence as sovereign countries away from the Georgian whine & complain.

These to independent countries which was forcibly annexed by a decision of the infamous Soviet / Georgian origin leader Joseph Stalin who decided in one dark night that Abkhazia & South Ossetia territories are part of his Georgia soviet republic.

To remind the Georgians that the inhabitants of the two regions are not Georgians and have never been Georgians.

South Ossetia is part of Greater Ossetia, that Stalin divided in two parts handing its southern part to become Georgian territory not only that, he also abolished the use of term North Ossetia to be replaced by Alania, Perhaps people once forget that they and South Ossetia are one entity.

Abkhazia was cut off from its natural border with republic of Adygea in the province of Krasnodar and annexed to Georgia.

When the Abkhazian War of Independence was declared & here I remind the Georgians those fighters who fought your argerssion troops & defend the Abkhazian capital Sokhumi & the entire soil of Abkhaz lands weren’t only Abkhazians.

Their support came from their Circassians brothers & other north Caucasian brothers; they came from Russia, Turkey, Syria & Jordan.

Georgia cuts off relations with all the countries that have recognized the independence of the two countries, Venezuela, Nicaragua & Syria, even with sort of special situation in relations with Russia itself.

I wonder why they don’t dare to cut off ties with Russia such as the other countries that recognized their independence?

I’d like to tell our Georgians neighbors, that we don’t have problems with you, whoever Abkhazia has a population & brothers outside its territory who will not hesitate to return to its defense if they ever think of its occupation.

What Russia did in 2008 was a necessary evil if somebody wants to call it that way, however I don’t see it an Evil move at all, because Russia doesn’t want the US & NATO military to sit in Tbilisi & set bases in Abkhazia or South Ossetia if they remain under the Georgian occupation.

The entire world must realize a fact that is brighter than the Sun itself, that Russia’s black sea coasts & the freedom of their naval & sea trade in the black sea is something that is not even what so ever subjected to bargaining with no one.

This is the red line, that we’ll going to protect in order to prevent Western military to be in.

As for the subject of Crimea, the story itself is repeated here; Crimea is a Tartar region back in time & was part of Russia during the rule of the Tsars after the war between Russia & ((Muslim Ottoman Empire)) that was supported by Great Britain & France!

The Ottoman Empire was defeated and Russia took control of Crimea, otherwise the British & French would be setting there, they didn’t support the Ottomans in the war against Russia, due to their love & loyalty to the Ottoman «Padishah».

The story of annexing Crimea to be under Ukraine’s administrative territory is the same as the story of South Ossetia & Abkhazia.

So the story itself is repeated & what Putin did was nothing put an attempt to fix past leaders mistakes that caused Russia & the entire region dearly for years & gave the US & the west in general free gifts that they don’t deserve.

To be honest I’m still counting on Putin to fix more of past mistake, that know that he’s aware of them all, because he’s an honorable man & respect his words.

What sovereignty problem that Ukraine complains about & that its inhabitants know their origins & history much better than the Mafia group that rules Kiev today.

Georgia & Ukraine continue to pursue abhorrent policies that undermine security & stability, which the people of the region desperately need in the light of the crises & tragedies in the region.

The peoples & nationalities of the region have the right to ensure their security in accordance with the requirements of stability.

The people of South Ossetia & Abkhazia will not think about separate from Georgia, if they are Georgians.

It is my hope that the Georgian government will reverse itself & do what is in the interest of its people & maintain good relations with neighbors.

At the end, it was Georgians who initiated the aggression, not the people of Abkhazia & South Ossetia.

As for the Mafia of Kiev, they must be absolutely confident that their stay in power to this day is only due the need of their masters in the West & trust us when we say, as soon as they had what they want, «Poroshenko» with his group of criminals will face their inevitable fate.

The Ukrainian & Russian people are one people, even if there are some differences between them due to past mistakes.

Therefore dialogue, wisdom & reason are the factors that must prevail among the inhabitants of a region with a single history & origins.

Just like Abkhazia & South Ossetia, if they remain under Georgian control, their future will only be US & NATO bases.

It is the same for Crimea, regardless of what is written & said with accusations pointing fingers against Russia.

To me as a person who despise western colonialism, it is a thousand times better for Crimea to be under Russian sovereignty than become a military base for NATO & the United States on the Black Sea.

We thank the god that Russia learned the lesson of the grand conspiracy that was being hatched & managed to abolish the West plans, at least for the moment before it was too late, knowing that as long as aggression & imperialism mind set is the faith of the West, we’ll keep anticipate more & more dirty plan from «Uncle Sam» with his disciples.