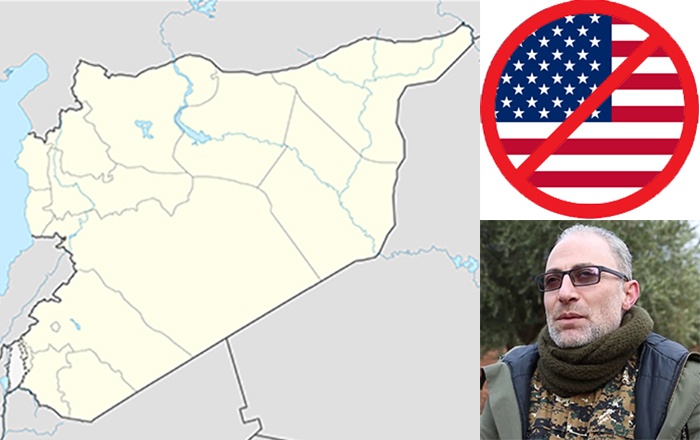 1 — Who failed and conspired against the revolution of Mullah Mustafa Barzani and prepare for the 1975 Algiers agreement between the Shah of Iran and Saddam Hussein?

2 — Who kidnapped Abdullah Ocalan 1999 and handed over to Turkey?

It was American and Israeli intelligence.

3 — Who abandoned and betrayed civilians in 1991 during the uprising in the Kurdistan region of Iraq and the uprising in southern Iraq, causing one of the worst disasters of mass exodus?

4 — During ISIS offensive attack on Kobani 2014 Why did the United States waited forty days to intervene after ISIS took control of more than 80 percent of Kobani, later the US aircraft destroy the rest of Kobani.

We ask why the United States didn’t transfer thousands of Kubani to Afrin as a temporary residence pending the reconstruction of the city, rather than keeping them in refugee camps, forcing thousands of them to migrate to Europe
.
Was it not for the administration of Afrin to seek to embrace our people in Kubani instead of embracing thousands of families of terrorists who had come to Afrin and were greeted under the slogan of the democratic nation and the brotherhood of the people?

A large proportion of these families served as the fifth column during the war of Afrin.

Why did not work to develop the political performance of the Kurdish politicians through intensive courses, but instead of all of this I did in one way or another To militarize society and thus destroy the future of the Kurds, we did not lose him a martyr in the battles, we lost through migration abroad, and left lost his educational and professional future.

6 — a significant section of the factions that participated the Turkish army occupation of Afrin was receiving support from Washington and we all remember the visit of US Senator John McCain to the northern suburbs of Aleppo in 2013, and some of these factions still so far receives direct support to the US Pentagon to Al Mutassim.

8 — Turkey is a member of NATO, and the United States is practically the leader of NATO, if the United States is not complicit with Turkey to occupy Afrin weak faith and NATO is said to issue a statement declaring his rejection of the Turkish aggression on Afrin, and since this law did not happen US-led NATO is a partner in the aggression on Afrin.

I will not trust the Americans…

Rizan Haddou
A Syrian Kurd, born in Homs, Syria 1979
Graduated from teachers Preparation Institute
He’s a Writer, human rights activist specialized in missing persons, abductees and detainees in Aleppo and Idlib.
He has many contributions as an intermediary in prisoner exchanges.
He is the media advisor to the Kurdish People’s Protection Units in Afrin.