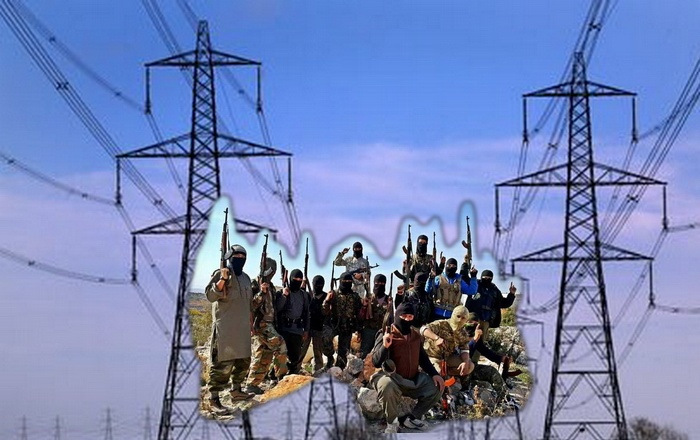 Local sources said that Chinese militants within the so-called «Islamic Party of Turkestan” are stealing electric networks connecting the villages of the city of Maarrat Al Nu’man in rural Idlib.

According to the agency, „Sputnik,“ the sources added: „The Chinese militants is pulling all the wiring and put them in trucks, heading towards the border area with Turkey to the north“, adding: „The militants deal with traders who buy the wire from them and then sell to Turkish merchants“.

The militants of the Islamic Party of Turkey „Uighur“ in early 2016 looting of large electrical equipment and operating engines within the Zaizon thermal station under the supervision of a group of technicians who crossed from the Turkish border to dismantle the electrical transformers operating station, and the dismantling of giant steam boiler, and trucking to Turkey.

In addition to the theft of the train by the Chinese militants between the station and the Beshmarun station between the countryside Idlib and Aleppo, after the railway was broken in broad daylight using bulldozers and cranes before being transferred to Turkey to be sold there as „scrap“.

During the past period, they also carried out large-scale looting, destruction of vital facilities, seizure of public funds and excavation of treasures and monuments in the areas in which they are located.

The Turkestan’s were the most prominent fighters of the so-called „Syrian revolution“.

Together with the Chechen and Uzbek fighters, they played a major role in controlling the military installations in North and North-West Syria, where they took from the rural Idlib West and North Lattakia their settlements with their families, Jihad in Syria).

They chose this area due to the presence of many villages and towns whose families owe loyalty to the Ottoman Empire against the background of their Turkmen roots and Turkistan.

The Turkestan Islamic Party in the Levant is known for its close ideological links with the terrorist „Al Nusra Front“.

The number of its terrorists in Syria is estimated at more than five thousand, whose origins are from the Turkish national minority in China’s Xingyang.

Turkey is their main supporter, of it’s not the only.