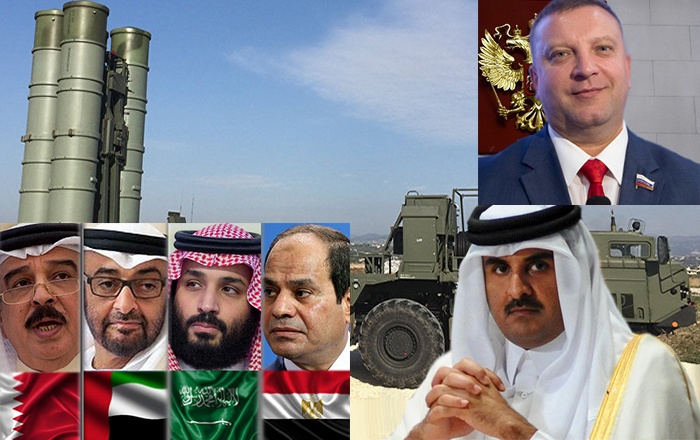 The Russian Deputy Chairman of the Defense and Security Committee of the Russian Federation Council, Alexei Kondratiev, stated that, «The kingdom of Saudi Arabia will not change Russia’s plans to supply the S-400 air defense system to Qatar», said on Saturday.

This came in response to a report published Friday at the French newspaper Le Monde, which included allegations that Riyadh had asked Paris to exert pressure on Doha in order to prevent it from obtaining the S-400 system.

Commenting on the allegations, which were not commented on by Paris and Riyadh.

Alexei Kondratiev, stated to the Russian Sputnik news agency that, «Saudi Arabia’s position in this regard is linked to the position of the United States».

«Washington doesn’t want to lose the regional arms market, because it’s a big scapegoat for them, and the US will continue to put pressure on the Saudis».

«It is clear that Riyadh plays a dominant role in the region, and the strengthening of the Qatari army of its military capabilities by the Air Defense S-400 system which gives it clear advantages; therefore, tension in Saudi Arabia is understandable».

Kondratiev pointed out that «country seeks to serve its interests and support the state budget by providing Qatar with the S-400 system».

He pointed out that «Saudi Arabia’s position here has nothing to do, and Russia will not change its plans».

Entering the first anniversary of the Gulf crisis which broke out on the 5th of June last year.

Saudi Arabia, the United Arab Emirates, Bahrain along with Egypt cut ties with Qatar and imposed «punitive measures» on the grounds of allegations of Qatar’s role in supporting terrorism.

Doha denies these allegations and accuses the Quartet of seeking to impose guardianship over its national decision and try to abuse of its sovereignty.