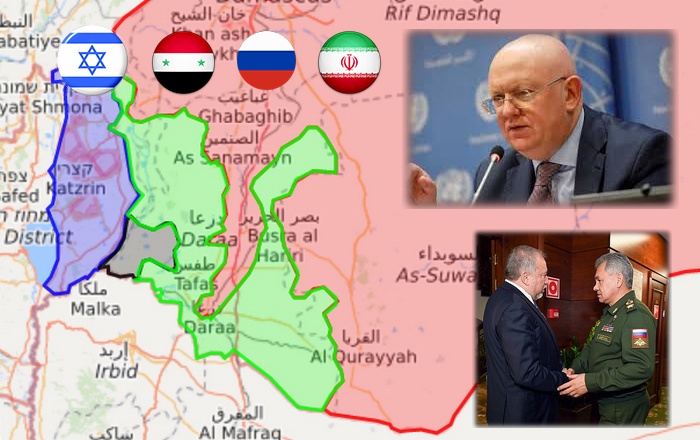 Russia’s permanent envoy to the United Nations, Vasily Nebenzya, confirms the agreement that been reached on the withdrawal of Iranian troops from southern west of Syria near the border with Israel and expects to implement it within days.

Speaking at a press conference at the UN headquarters on the Russia’s assumption of the UN Security Council presidency in June, Nebenzya said in response to a question on whether an agreement was reached with Iran and Israel on the withdrawal of Iranian troops from southwestern Syria.

«I have read reports in the press about an agreement on a certain division of forces in southwestern Syria, and as far as I know, an agreement has been reached».

«I can not say whether it has just been implemented or not, but, as I understand it, the parties I have worked with are satisfied with it».

«If the agreement is not implemented today, it will happen in near future» he said.

Israeli media reported that the Israeli government had agreed to deploy Syrian troops at the border area south of Syria if the Iranian units were withdrawn.

On the backdrop of reports on preparations for the return of Syrian troops to the border area, Israeli Defense Minister Avigdor Lieberman visited Russia on Thursday, where he held negotiations with his Russian counterpart, Sergey Shoygu.

Israel’s ambassador to Moscow, Harry Korin, told TASS news agency that the Israeli authorities were «satisfied» with Russia’s position on the Iranian military presence on the Israeli-Syrian border.

Korin noted that Israel and Russia are engaged in intensive discussions on this issue, while stressing that the presence of Iranian forces in the region «targeted Israel».

Russian Foreign Minister Sergei Lavrov said on May 30 that agreements on a zone to reduce escalation in southern Syria meant that only Syrian forces should remain in the territory.

He also recalled that these agreements, reached in 2017 between Russia, the United States and Jordan, provide for the withdrawal of all foreign troops from the zone of reducing tension.

Nebenzya: The West has abandoned its draft Security Council resolution on the three issues of the Syrian crisis.

On the other hand, the Permanent Representative of Russia to the United Nations those Western countries have abandoned in the Security Council on its draft resolution on the main issues of the Syrian crisis.

During the press conference, Nebenzya explained that the document deals with three central aspects of the Syrian settlement: the political process, the humanitarian situation and the subject of the use of chemical weapons in the country.

«At present, no one is pushing this draft resolution forward.

It has been recalled at times, but it has never been considered even at a quasi-official level,» Nebenzya said.

«I do not think the time is right now to adopt such a resolution, and I think that my colleagues in the Security Council agreed with me on this matter at some point».