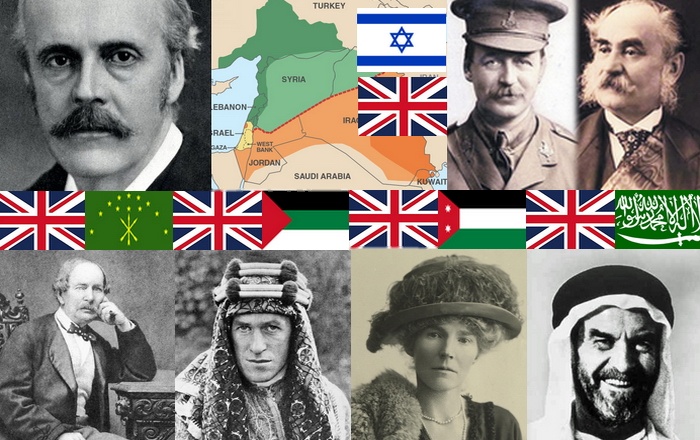 I’ll not open the big book of Great Britain spying & sabotaging the world, which it has a lot of pages.

A small sections includes names like T. E. Lawrence «Lawrence of Arabia» or Gertrude Bell «The Queen of the Arabian Desert» or Harry St John Bridger Philippe the «right hand of King Abdulaziz Al Soud», with many others who have been sent by Great Britain to the countries of the Greater Middle East & its surroundings since the late nineteenth century for a single plan of subjugating the entire region & developing tools & regimes, creating entities that serve the interests of Britain & the colonial West.

The colonialist responsible for all the crimes committed to this day.

The fact that most of this information is known to everyone in one way or another, regardless of the size of knowledge about the history of these people, the result & is somehow decent amount of information that history gave us, are enough to anyone to figure out what is the purpose behind it.

In fact, Britain & the West generally don’t need a «user manual» to understood how they functioning.

My talk is about another figure sent by Britain to the North Caucasus at the time, in the late 19th century at the height of the war between the native Caucasian population of the Circassians & others against the Russian tsars.

David Urquhart, or should we call him «Lawrence (Urquhart) of Cherkessia», the one who played the same role that Lawrence played in Arabia, this guy done the same in Circassia, not only that but he also the designer of the Circassian National flag, which we have been proud as Circassian for decades,to raise it high on every occasion & put it as slogans & logos & even this flag is the official flag of the Republic of Adygeya, one of the Circassian republics within the Russian Federation.

The painful fact is that this flag is not for us, the «Circassians» & we were misguided for decades & being deceived by the PHD. Of deceiving, the one that I call it the snake head of every single conflict that took place in this world for centuries, the «Great Britain».

My Fellow Circassian, this falg is not ours & it was designed be no Circassian or even north Caucasian.

The British diplomat and politician and the Scottish British writer David Urquhart, was also a member of the British Parliament from 1847 to 1852.

Was sent on a mission to the region to work under British diplomacy to the Ottomans & was assigned the first role in the war between Greece & the Ottomans.

In 1835 he was appointed Britain’s ambassador to Constantinople & he was the instigator of the British incursion into Circassia.

He had a great role, very similar to that of his counterparts such as T. E. Lawrence «Lawrence of Arabia».

Finally, to get the same result, the Circassians were subjected to murder & then their displacement to their land, is to become a victim of a bigger game, the one is bigger than them, just as happened to the Arabs and the side responsible is the same.

I’d like to tell the Circassian people around the world that our Circassian national flag, designed by a British diplomat «spy» David Orckhart.
So, it’s not an honor to carry & cherish it.

Enough bearing the shame by we think with our usual naivety that it represents us & I really regret when I hear some Circassians give explanations of what the flag design stands for.

I’ve heard many explanations of what the flag design stands for, none of them like the other.

It is a hateful flag and emblem that shows the fall of our Circassian people into the trap, as are all the peoples of the region that fell into the trap of the West represented by Britain & France colonialism and their legitimacy heir the United States.

Allah says in the Holy Quran: Allah sent a messenger to every nation to guide them.

Britain says: We sent a spy to every nation to do what ever we want.

The result was what & how is the situation of the regions & its people today, with all the tragedies, wars, woes & bloodshed that have taken place throughout the entire period of time.

Instead of Arab accusing the Turkish Ottoman, they should accuse Britain & France of what happened, especially after the Sykes-Picot Agreement & the Balfour Declaration.

Arabs are Muslims, Christians and Jews are victims, and the Jews of the world are tricked to come to Palestine, of course if they are not convinced of Zionist ideology.

I don’t defend anyone, the Ottomans nor Russians.

Despite both are being in the middle of many atrocities, they are also, in one way or another, victims of the same forces.

Britain has worked to divide the entire region with all the colonial West countries & the United States inherited & increased that legacy.

The West used the Circassians for their hidden purposes to weaken the Czarist-Russia’s power in order to overthrow it and to replace it with a communist atheist regime rather than religious whether it be includes Christian Orthodox, Islam, Jewish & even other Asian traditional religions, that in many levels defend the same values & humanity that «heavenly religions» stands for.

Even King George V of Britain didn’t bother to save his cousin Nicholas II, leaving him to be executed by the Bolsheviks.

Can anyone distinguish King George V from Tsar Nicholas II in the picture below?

And here I repeat, I don’t defend either Russia or anyone else.

Everyone committed what actually committed.

The time has come to deal with facts as they are.

The Ottomans used the peoples of the Caucasus who left their land to meet their interests under the trick of our «Muslim brothers».

Today, we still hear voices of some Circassian nationalists, some of whom are called Circassia’s madmen, insisting on doing what has happened before.

I am surprised by the fact that there are people in the region who still believe in the West & trust, believe that they are exists to offer support.

The story repeated & kept on repeating.

So what the result that is expected?

Wars, tragedies, massacres & oppressed nations come out empty handed always & that if they came out alive.

Many of us are still eager to stand by the same forces as they are determined to run behind a mirage.

The West generally doesn’t care about the future & the fate of any of our people, what interests them is their interest, the same American position today on various issues.

There is nothing wrong with that, but it shouldn’t be on the expense of others, with those west use democracy, freedom, human rights … blah blah blah…

I end with a message to all the peoples of the region in the light of all those events that have taken place in the past & still taking place today.

Einstein said: Madness is to do the same thing over & over with expect each time that the result will come different.

How long our gullible peoples will always bet on the West despite the known history, with still expects to get a different result from what it happens & took place in the past?