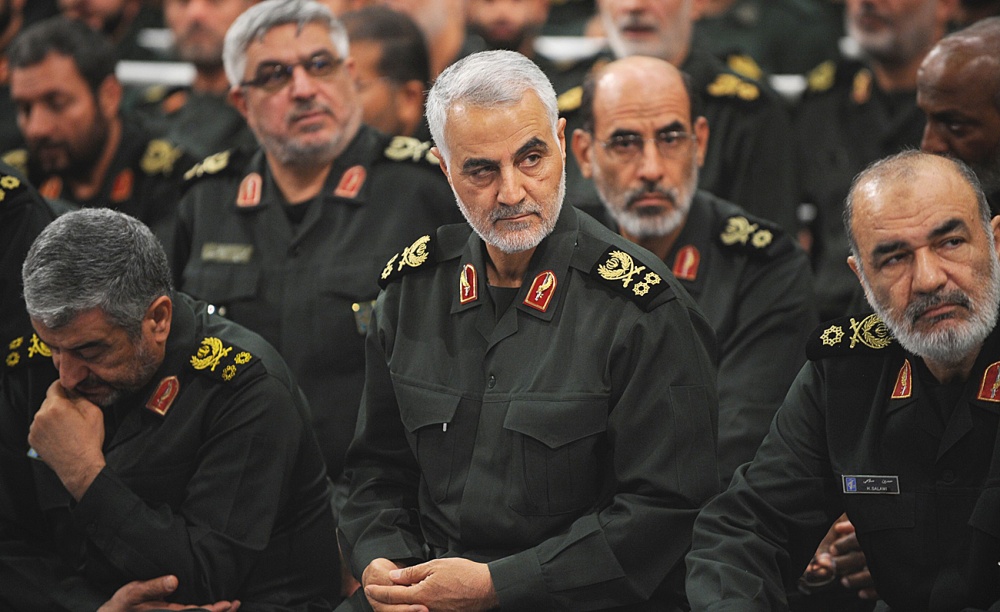 On 8 May 2018, in advance of the specified date, Donald Trump announced that his country was going to retire from the multilateral agreement concerning the Iranian nuclear programme, JCPoA (Joint Comprehensive Plan of Action), and consequently from the secret bilateral clauses signed with Teheran.

Although no one knows the exact content of these clauses, they evidently have to do with the sharing of the Middle East.
During the whole period of their application, American and Iranian forces have met on a number of battlefields across the Greater Middle East, without ever confronting one another directly.

This period is now over.

Tehran had the choice to attack either American soldiers or Israel.

General Qasem Soleimani chose the Syrian Golan, which is illegally occupied by Israel.

This morning of 10 May 2018, at approximately 00:30, the Al Qouds Force of the Iranian Revolutionary Guard – the Iranian military elite – attacked Israel from its bases in Syria.

The Hebrew state, choosing to escalate, riposted disproportionally, firing close to 70 missiles on Iranian targets in Syria and attempting to destroy the Syrian anti-aircraft defense system.

Officially, the Iranian operation was a response to the Israeli attack on 29-30 April against the bases of the Revolutionary Guard.

On that night, the Syrian anti-aircraft defenses had remained paralyzed, since they were deprived of Russian radar data.

However, on this occasion, on the contrary, they were able to destroy several Israeli missiles.

Israeli missiles and Syrian anti-missiles confronted each other for several hours. Although the Iranian attack was countered by the Iron Dome, and caused no damage in Israel, there were losses among the Iranian assailants and in the Syrian defense system.

This episode occurred just after Benjamin Netanyahu’s meeting in Moscow.

The Israeli Prime Minister had made the journey to tell his Russian interlocutors that Israel would not allow itself to be attacked from Gaza, Lebanon and Syria at the same time.

As I explained in a previous article, Russia considers that the Israeli attitude is justified.

Damascus and Moscow were trapped by their alliance with Teheran.
While they are grateful to the Revolutionary Guard for having saved the Syrian Arab Republic at the beginning of the war, they nonetheless now find themselves engaged in a conflict which is not their own – both countries recognize Israel as a State, which the Islamic Republic of Iran refuses to accept.

Paradoxically, this situation had been anticipated by the White House.

Donald Trump, for whom regional peace can only be possible if each party accepts its own defeats, considers Iran to be a danger because it refuses to recognize the State of Israel.

It is precisely in order to force all regional actors to accept reality as it is that he is moving the American embassy to Jerusalem.

This morning, at the Conference on the security of Hertsliya, the Moldavian-Israeli Minister for Defense, Avigdor Liberman, had every right to express his pride in having defended his country and inflicted losses on his adversaries.

He didn’t miss the opportunity to remind the participants that Israel is a small country whose leaders are regularly welcomed both by the Kremlin and the White House.

By doing so, he implicitly praised himself for this turn of events, which will oblige US. forces to remain present in Syria, and Russia to take note of this fact.

Israel is attempting to pressure Syria into controlling the Iranian troops on its territory just as it pressured the Lebanese government to control Hezbollah.

But this strategy failed in Lebanon, where Hezbollah is today both the main military organization – far more powerful than the national army — and the strongest political organization – as we saw during the general elections on 6 May.

Of course, Syria is still a State in the fullest sense of the term, which Lebanon still is not, and the Iranians are not integrated into the Arab population, while Hezbollah directly represents the Lebanese people.

We should therefore be careful of this parallel.

From the Russian point of view, the deployment of the Revolutionary Guard alongside the Shiite populations of Yemen, Saudi Arabia, Iraq, Syria and Lebanon, is more or less comparable to that of the Russian soldiers protecting Russian citizens living in Transnistria, Abkhazia, Ossetia and Ukraine.

But the presence of the Revolutionary Guard in Gaza – where they supervise the Islamic Jihad and a faction of Hamas – cannot be justified in the same way, not to mention their infiltration in Africa and Latin America.

Besides which if Moscow were to ask Tehran to withdraw its forces from Syria, they would have to replace them, or else, allow Ankara to deploy new troops there.

The withdrawal of Iran would apply not only to the Revolutionary Guard, but also to their auxiliaries – the Afghan and Iraqi Shiite militia.

This would force Hezbollah to make a choice in its turn.

From the Syrian point of view, the embarrassment is palpable.

No-one dreams of sending home these merit-worthy allies, nor of allowing them to trigger a new conflict with Israel.

The question must be asked – why did the Revolutionary Guard take this initiative, and did they consult with Supreme Leader Ali Khamenai before they did so?

In other words, should we interpret these events as a real threat to Tel-Aviv and Washington, or as a political game pertinent only to the Iranian interior?

Indeed, as soon as the United States had withdrawn from the nuclear agreement, President Hassan Rohani appeared on television to declare that the JCPoA was a multilateral agreement, and could not be blocked by a single party.

He tried in particular to reassure his citizens by affirming that the country had prepared for this eventuality, and that their quality of life would not be affected.

He was not believed.

Within a day, Iranian money collapsed, losing close to a third of its value.

Speaking in his turn, Supreme Leader Ali Khamenai cursed Donald Trump, thus giving the impression of confirming that a catastrophe had ravaged the country.

Furthermore, he expressed doubt that the Europeans would be capable of opposing the United States, concluding that they too would also abandon the agreement.

For the moment, European companies are waiting to see what their governments will do before they pronounce themselves.

However, they are all preparing to lose their investments, as it happened during the first round of sanctions.

In any case, while the United States hasn’t yet drawn military conclusions from their withdrawal from the JCPoA, the Iranians have regained their freedom of movement.

By attacking Israel, they have answered President Trump.

It is probable that they will maintain the pressure in Syria and elsewhere, until Washington returns to the negotiating table.