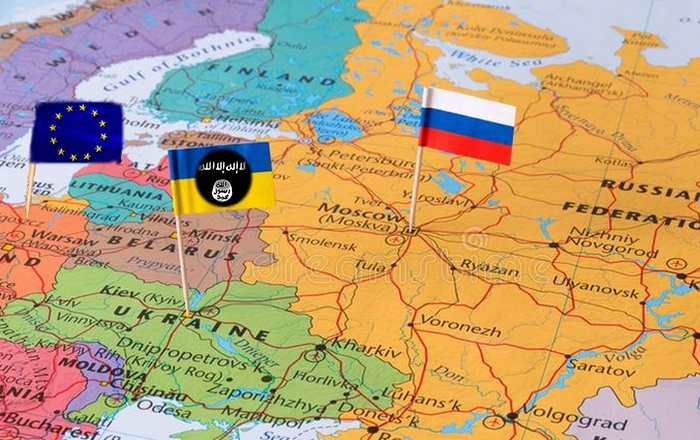 Obviously the gangs that run Ukraine these days are legalizing the presence of militants who fled from their lost battlefields in Iraq & Syria, those who went to Ukraine for subsequent the upcoming sabotage activates that might take place in Russia, perhaps in European countries.

These terrorists who ran for their lives obviously after they realizes that, if they gonna keep fighting in Syria & Iraq, only death & in horrible ways will be the only fate that is awaiting for them.

Well, there is no secret that the Middle East had become one of the biggest grave yards or should I say crematory for terrorists & all human dregs of the world.

As it said leaving Syria now, which the country that became less hospitable to them, with militants from the so called «Islamic state» & other terrorist organizations are increasingly finding shelter in Ukraine.

According to well trust worthy source in the Ukrainian Migration Department, only over the past 18 months, on the territory of Ukraine, presence of many terrorists had legalized, by receiving forged documents, national passports & registration documents, for more than 50 fugitive terrorists.

Most of them are natives from the northern Caucasus and former USSR Central Asian republics, many of whom are already on the international wanted list.

Having escaped from Syria & Iraq, thanks to the actions of the Syrian & Iraqi forces & the tripartite union (Russia, Turkey & Iran), there are fewer terrorist activities, with militants are settling in Turkey, mainly with forged documents.

Many of those militants in Turkey were detained as a result of law enforcement raids, with some of the foreigners are offered to voluntarily leave the Turkish territory.

As the most attractive host country, the ex-militants indicate… Ukraine, this choice justifies itself.

Despite the whole complex of filtration measures provided by the Ukrainian legislation for migrants, «Syrians» are allowed to enter the country without any problems, even they receive help.

In principle, the mechanism of legalization is not so complicated.
Simply it will only cost between 100 to 400 US dollars, they can purchased a Ukrainian passport of a citizen who lived until 2014 somewhere in the Crimea, then necessary photo is pasted, with the assistance of the migration services & the Ukrainian intelligence, a seal is put on & an application for a new identity card is filed.

Registration for a new place of residence is now a full-fledged; they became “citizen of Ukraine”.

There is a way & perhaps much easier, In case of an official application will be a little bit difficult to be prepared by the authorities of Ukraine, with a statement of persecution for political reasons, they been given the opportunity to obtain refugee status.

As practice shows, such an outcome is possible even for those foreigners, in particular Russians, who knowingly for the Ukrainian authorities are wanted by the INTERPOL.

With the Russian government can easily request for their detention by the INTERPOL, so if its known for sure with enough fact evidence that Russian authorities are able to present proving that those wanted figures are in Ukraine, it will be difficult & embarrassing for the Ukrainian authorities not to cooperate & hand them over to INTERPOL.

However by given the complex interstate relations with Russia, Ukraine doesn’t extradite such citizens, preferring to use them in its own foreign policy game.

So they can do whatever it takes to hide them & offer them protection, till they assign them with the new «TASK».

We can understand that for sure, so, with that being said, it’s not that difficult to guess why the Ukrainian authorities are trying with all its might to take the Russians terrorists from the Middle East to be under their wing & creates the most comfortable conditions for full legalization for their stay.

Knowledge of the Russian language, geography & mentality familiarity, with decent experience in combat & guerilla warfare & the readiness for some of them to go far to attempt suicide bombing operations, makes these people irreplaceable specialists for organizing & executing sabotage & terrorist attacks both in Crimea & the entire Russian territory.

But, why just Russia could be their target?

According to available information, the secret services of Ukraine by no means exclude the use of saboteurs in the territories of their «European partners».

Why not, it’s a fine tool for bargaining, after all the so called government in Kiev consisting group of gangs & Mafia.

Having obtained Ukrainian citizenship, these terrorists can easily enter Europe, which they can have the possibility & the eligibility to obtain at least three-month Visa-free stay in EU countries.

It’s without a doubt a serious wake up call, not just for Russia, but it’s for the EU as well.

The question now is…

Which & how many of them will we see tomorrow, next week, next month on the streets of London, Berlin or Paris & even Stockholm to name a few?

Perhaps, we’ll learn about it, unfortunately it’ll be too late…