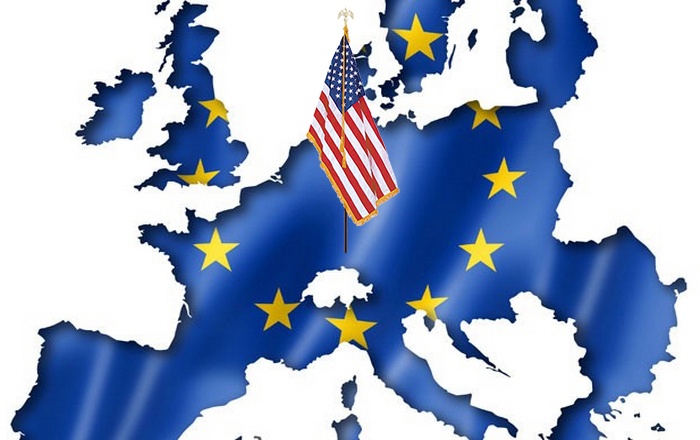 As soon as the US president Donald Trump announced the United States'(expected) withdrawal from the nuclear deal with Iran, attentions went towards Europe to see how its leaders would act after the US decision.

The nuclear agreement with Iran… along the withdrawal of the United States from it may be the last test to measure Europe’s independence by its calls & its attempt to maintain, defend its interests in isolation from the United States.

In fact, there are indications that EU countries may have learned the lesson that their interests should be considered first & foremost, apart from Washington’s will.

This is the most important test for European policies, which has shown the position of the shaky & floundering European countries, the extent of weakness & subordination to the United States without taking into account the minimum requirements of European economic & security interests.

We’re fed up with talking about the weakness level of European governments.

At any jolt, or we can call it a predicament caused by the United States, there is a direct state of confusion, which sometimes leads to panic & inability to act & decide in all the governments in the European Union.

From Angela Merkel, who usually meets Trump with a shudder, to «Unruly Elysee Boy», who is speaking in a certain way when he with Trump, then when he in Paris his voice comes out louder, but words that don’t exceed the tip of his tongue.

We certainly cannot forget Mrs. May, the British prime minister alongside her entire «Ministers», who has undoubtedly entered history to be one of the worst & weakest governments that ruled from 10 Downing Street ever.

Her foreign Minister, «Whacko Blondy» Boris Johnson, didn’t even have the courage to stand up to express an opinion that contradicted the US administration.

He resorted to writing an article in a newspaper explaining what he wanted to say & heading for an interview with Fox News, in a show that Trump watch usually, hoping to convince the US president.

What is the problem with the governments in Europe when it comes to their foreign policies, with their almost absolute dependence on American desires?

We’re totally understand the nature of the case in Europe & the extent of their subordination to the United States, since the Second World War, which Europe came out after exhausting & destructive, where the United States entered to control countries in Western Europe via various aspects, economy to adoption of policies in order to restore social structure & post-war concepts, rebuilding everything in Europe in line with American standards.

Only French President back then General de Gaulle was the obstacle in front of the United States tightening its control over Europe & interfering with everything in it.

But at crucial stage comes, the United States put him out of power in France, by ((popular demonstrations))!

Even the establishment of the North Atlantic Treaty Organization was the American tool to control Europe & dictate instructors; even the sovereignty of those European countries on its territories & their national security is also on the American hand.

After the end of the so-called Cold War between the Soviet Union, which was controlled & dominated the Eastern part of Europe in its turn, the United States put all these countries under its eyes, as the Soviet Union collapsed & then the separation began.

Those countries were part of the Soviet Union or under its dominion after World War II.

The nature of the eternal formation & doctrine of the United States consider Russia as its «No. 1 Enemy».

This is no secret; many US. Political & Military figures publicly said so.

The inclusion of all those independent of the Soviet Union alongside the rest in Eastern Europe to the US-NATO side is very important to the United States, so, they didn’t hesitate to include all those countries to NATO to tighten the embargo on Russia, Most of them joined the European Union as well, so the United States now is at the Russian borders directly, «under the guise of NATO».

Just a simple question before I continue…

What do you think someone like Putin will respond & act in the light of these circumstances?

Even some countries that, by their ethnic or historical nature, in which were close to Russia somehow were subjugated.

The former Yugoslavia is a good example.

Despite being independent of the Warsaw treaty during the Cold war, Yugoslavia, was an ally to Russia, however its multiple ethnicity, is the key factor for any manipulation that will be used the future to tear it in pieces.

We all know now that Yugoslavia, become 8 countries, Czechoslovakia, become 2 as well, ironically like the fate of the USSR who become 15 countries & if America’s plans succeeded, the current Russia will be divided to more than 15 countries, at least.

The United States with the rest of its NATO allies have used the accumulation of ethnic animosity in the Balkans in general, a problem inherited from the Ottoman Empire, whose policies & regime were the root cause of bloodshed & massacres that took place in the former Yugoslavia.

The West has used all these accumulations with fools who ruled these countries, such as the extremist rulers of Serbia, who were insane enough with lack of political foresight & knowledge of the intricacies of the international political scene, followed their national emotions & mental illnesses, which allowed them to commit horrific massacres.

The United States & its allies eagerly waited for them to commit all these atrocities, to stand up (as usual) in the sake of (save the tortured & oppressed humanity).

I am sure that all the crises that hit Europe, whether economic, social & political or security, were in some way made & managed by the United States so that the countries in Europe would remain under American dependency.

Even if the entire European countries thought of working to achieve their interests & put it as a priority away from US interests, we’ll immediately witness a crisis in the region bring the horrified Europeans back under the wing of the «American Condor».

For example, geography has a role to play in decision-making of Europe, which doesn’t mean anything to the United States.

For example, if a war between Russia & the United States breakout, Europe would be the first to be destroyed.

When any European country considers its own economic & trade interests with Russia, which is a natural thing governed by history & geography, even by the personal interests of the population, the United States will stands against it.

All of us saw the US reaction when the Turkish-Russian rapprochement began to reach advanced levels after the crises that hit the Russian-Turkish relations, of which the Syrian crisis was one of the reasons, the crisis which is the United States accused of escalating it without a doubt.

We saw the extent of American anger & sought to prevent the Russian-Turkish rapprochement, they began looking for various ways to halt this rapprochement; even they went far by amounted a coup in Turkey, a coup that could have caused a seas of blood.

There is even a Russian-German rapprochement, for example & for some reason something is on the horizon to obstruct any cooperation & understanding between the two countries.

The «Skripal» story is one of the few scenarios that been used to destroy any Russian-European cooperation.

We’ll have the same situation if any European country has a rapprochement with Russia, we can imagine for sure how the United States will react.

Now that Trump has announced the US withdrawal from the nuclear deal with Iran, Europe has a historic opportunity that it must seize to achieve its independence & serve its interests, away from America’s guardianship.