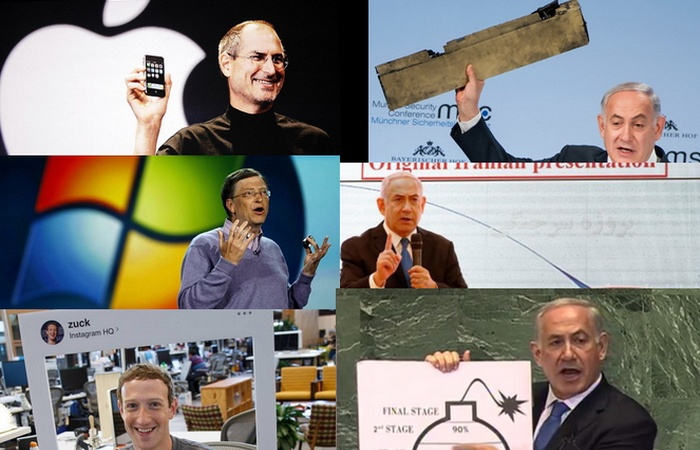 Our BiBi, the prime minister of Israel Benjamin Netanyahu, is still keeping his enterprise style, by showing off, whine & complain about Iran’s alleged military nuclear program.

Fortunately for him, Trump also came to sing the same song with him.

What’s really puzzling is why Netanyahu has always insisted on stirring up problems in the region that have already been engulfed in bloodshed & disasters for more than a decade now.

All who’re wise are working to calm the situation, except Mr. Bi Bi insists on raising problems & yelling.

We have not forgotten his speech at the United Nations General Assembly last year, while he was carrying a painting in the form of like he’s instructing children in kindergarten, the status of the Iranian nuclear activities, or even his speech at the last Munich International Security Conference, carrying a piece of wreckage drone, that was dropped by Israel, claiming to be Iranian.

Two days ago, we were witnessed his presentation, that reminded me of the days when Steve Jobs & Bill Gates, had presentations to show the world their latest inventions & products of their two companies, in a spectacular shows.

Netanyahu apparently is trying to do the same, he insists on accusing Iran of continuing to develop a nuclear weapon.

The show began on a stage, a platform & a screen, then unveiled shelves full of folders & CDs, which he said were documents, data, pictures & videos, which Mossad was enabled to bring them from Iran.

Before Bi Bi remove curtain revealing the shelves of folders & CDs, I thought naively that I would see an Israeli car or some sort of newly invented machine or something that makes 1,000,000 kinds of sandwiches in one minute!!!

Then I remembered that I was watching Bi Bi, not Jobs or Gates or even Zuckerberg.

Aside from cynicism, I will return to discuss what Netanyahu announced in his presentation, if we assume & here I will be completely objective in order to address my words to both leadership in Israel & Iran alike.

If all that huge amount of data documents is true, which weighs more than 100 kilograms as a weight load?

How could the Mossad bring them from Iran?

Have they copied them from the original, or brought them fully to Israel?

Where is the security, intelligence, revolutionary guards etc… dozens of famous Iranian authorities??? Sleeping??? Drugged??? Been Hacked??? Been bought up & were recruited to work for the Mossad ???

How many people were recruited by the Mossad to carry out the operation???

Did Israeli Mossad agents travel to Iran & carry out all this work, carrying, smuggling, copying, shipping all these documents???

Is the whole story fabricated to serve an Israeli propaganda aimed at continuing pressure on Iran with the American orientation & even Arab Gulf states towards escalation with Iran?

To be reasonable, there is no doubt that there is some truth in some of the information announced by Netanyahu, even many of it are known & haven’t been hidden, but the whole story may be fabricated, by incorporating a set of lies into some correct information to formulate a scenario that would aggravate the situation in order to find an argument to cancel the nuclear agreement with Iran.

It’s a real science in itself in media, how can you build a whole story consisting of one fact with some real signs, plus 20 lies, to get an integrated story supported by visual & graphic effects with mental dazzling factors, adding a humanitarian touch to affect some of the weak hearts audience, thus who some may believe & be convinced … I’d say some.

I remain in a state of ebb & flow; till I red what was published by the Israeli newspaper Yediot Ahronot about the details of the Mossad got the number of documents that filled at least two reservoirs.

The newspaper published some details about the Mossad managed to bring documents from Iran, which weighed hundreds of kilograms, after the failure of Iranian security to catch them.

The date of implementation was according to the newspaper’s website was in January.

Does this history ring any bell?

Yes, the same period of popular protests that swept through Iran, I’ll not go into the principles of conspiracy theory, but I think that the wave of protests in Iran has created an atmosphere of alertness & public chaos in Iran & an Israeli role so that the team in charge of carrying out the operation can do it.

That’s it, the operation took place during the protest period, I will not go into more detail, the picture is clear though.

However, Iranian security failed big time & miserably fell in undertaking what is supposedly their duty to protect Iranian national security.

Now… I don’t want to dwell on my article, I will ask real questions, to get back to the origin of the subject & ask some logical questions.

What is the need for Iran or any country in the Middle East for a nuclear weapon, which will not be used, nor the super powers in the world will not allow to being used in an area full of global interests & wealth, which is the most important trade & economic route linking the East to the West, North to the South.

Who will use a nuclear weapon to destroy & pollute the Middle East, which is the source of almost the world’s resources & the sanctuary of heavenly religions to make it a radioactive polluted land that is not suitable for life, investment or work?

Who is this fool who will use a nuclear weapon against Israel, which are only a few kilometers away from the surrounding countries?

Is there a fool in Israel who might use a nuclear weapon against any country in the region, exposing Israel itself to be nothing but courtyard, annihilating its people?

Yes, the world seems to have forgotten that Israel has a nuclear weapon!

Does Israel dare to use its nuclear weapons? Why do they have to use it anyway?

There is no need to use it & Isreal’s security is not in danger.

The Israelis must understand this fact.

In conclusion, I say to Iran: If the words & information announced by Netanyahu are correct, Iran has a real problem, not with regard to the subject of the nuclear program, but its security issue. Iranian security & intelligence are in deep sleep.

So before Iran develops a nuclear weapon, the must wake up from their deep sleep!

Speaking to Iran regardless of whether Netanyahu’s speech is true or not: If you want to respond to it, you should use the same method, by presentation in the same way & form as Netanyahu did.

Allow me to give you two subjects to talk about:

Finally my last message to the people in Israel.

Be calm, nobody will nukes you.

The problem is with your corrupt leaders, who always succeed in exporting their crises, corruption personal scandals & their failure to solve internal problems, turning them into the same cylinder that talks about the crisis of the existence of Israel & the desire of the surrounding area to remove them from the map, Through an escalation here & there to export Israel’s internal problems abroad.

Follow the corruption cases of Netanyahu & his wife, the time has come for Bi Bi to follow the footsteps of Olmert & the rest of corrupt Israeli politicians to be punished for his corruption!

I ask the Israelis to think about their society, which is full of internal crises.

You have problems related to racism, economy, many social & psychological problems, even Jewish extremism (ISIS style) & all those crises that you have to work to resolve if you want to live in peace & prosperity.