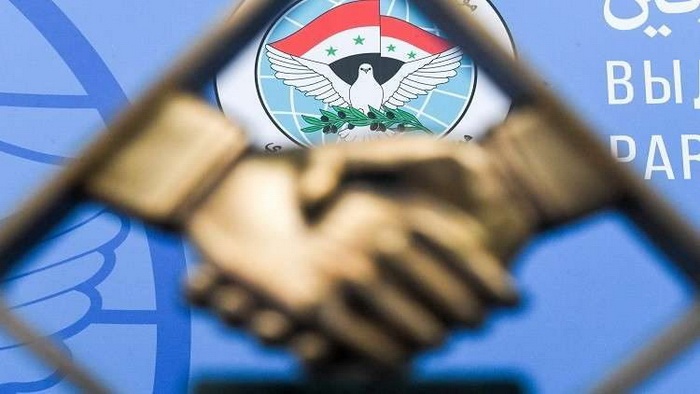 Finally, after a marathon tour with theatrical performances, the Syrian National Dialogue Conference in Sochi ended.

After long suffering & volatile atmosphere witnessed by the Conference, with fights, screams & withdrawals from many of the parties that were supposed to participate.

With the American style & the American masquerade that began to withdraw from the conference, followed by countries known as France and other Western countries, the United States then used its «SUPER» weapon by impose sanctions on some Russian companies & authority figures with the same American petty manner, indicating the level of American anger at the Russian role.

If things are taken, the US childish act by imposing sanctions may be evidence of significant progress in ending the Syrian war; the Syrian National Dialogue Conference in Sochi has broken many walls & drawn a line through the conclusions of the conference.

The only truth that we discovered in the conference, which we have talked about in the past, is that those who oppose ending the war in Syria are the same who withdrew or refused to participate in the conference, each of their reasons & arguments.

Even Turkey was part of the problem, after about two weeks of Operation olive branch, Turkey entered their army & used the Syrian Free Army fighters which are Syrians for sure, what Turkey is relying on are Syrians in the war, when one Turkish soldier fall, there are twenty or thirty of Syrian fighter falls.

Those who look at the map note that the progress made by the Turkish forces & the Syrian opposition is very timid after 14 days of operations, with all this Turkish media & military flamboyant momentum, the military operation didn’t achieve anything, which is shows why Turkey behaved in such a way at the conference, with facts that Turkey’s man is still using his same old style.

We may be optimistic & we really like a thirsty one in the desert hoping to reach the end point of the Syrian war.

There are still hopes, although there is no optimistic data yet.

The fear, that Sochi conference will turn into a boring drama series like Geneva, Vienna & Astana.

We don’t want to see consecutive episodes, Sochi 2, 3 & 10 without access to anything.

The situation in Syria has reached a point where the war must end & Russia, in particular, is in control of things, or so it seems, to be more serious if it wants to end the war quickly.

What I noticed is that, all this large number of people who came from Syria doesn’t have any value as the number of arrivals doesn’t mean anything, most of them came for tourism & roaming & wasting time & they were a complement to the number with no role for them.

The problem now is that, we have reached a stage that can no longer afford to waste time.

We are looking for action on ground which must be presented with power.

I think if the Russian president could bring together the Syrian, Turkish & Iranian presidents at a four-way summit, it would be better than 20 dialogues & conference.

The situation has now become clear.

The Syrian opposition has confined itself to a military or a political party with the opposition parties supported & residing in Turkey only.

Perhaps the best thing that was done by the conference is to liquidate the opposition, which clearly showed that the remaining powers are working alongside Turkey exclusively, taking into account the bodies funded by the United States & at the same time the current tense situation between Turkey & the United States.

What bothered me most was the way that many of the Syrian figures who came to the conference from Syria acted, most of whom don’t feel any responsibility; they behaved as if the country & the bloodshed were not their blood.

The Syrian army has lost over one hundred & fifty thousand soldiers & officers, with losses is far more than entire Syria Army losses in all its wars since 1920, a history of the fist battle fought by the Syrian army against the French occupation at Maysalun.

The Syrian army has lost in this past seven years more than what it lost in all its wars.

Russia must work seriously if it wants to end the war even if it is necessary to impose conditions on all parties without exception, conditions must be imposed on everyone.

A conscious decision must be made with persons who are aware & bear responsibility regardless of who is that person.

Russia must remember that it intervened in the Syrian war to prevent its access to Russian territory.

The result of the war didn’t always mean just for increasing Russian arm deals to the countries of the world after its presentation in Syria.

I repeat, since the beginning of the Syrian war, more than 7,000 fighters from Russia have joined the terrorists groups in Syria, this is the surest number Multiplied by a thousand with Gulf funding & Western support, so this 7,000 will be 7,000,000 will fight inside Russia.

Stability in Syria is important for stability & security of Russia.
Russia must also work on the economic sphere.

Russia must remember that it has many elements of the economy that can be launched through a stable Syria.

Russian economy is not only «Gazprom» & «Arms contracts».

Russia must be aware of the fact that maintaining peace & security in the Middle East is the door of safety & peace even for the national security of Russia, all the fallen Russian soldiers in Syria would have been in hundreds or even thousands if the war came into Russia.

If Russia wants to protect itself & preserve the gains that been made, it must work seriously to end this war in anyway.

We have reached a serious stage & must make a quick & decisive decision to end this farce.

It is up to everyone who bears responsibility to realize this.

There is a reality on the ground that ISIS still on the map in Syria, with the fact of eliminating HTS which is become obvious, that it must be done through Turkey, also the Kurds must wake up & realizes that they are in one country name Syria & just forget about the meth of US support.

Sochi conference should be the first step but we hope it will not be the beginning of a series of useless parts.

It is said that if you want to learn the truth of things, don’t follow & believe everything you see & hear on the media, what was agreed upon & reach it’s in fact under the table & behind closed doors.

With only idiots fools who follow & believe propaganda, with fact that this platform here is not one of those.