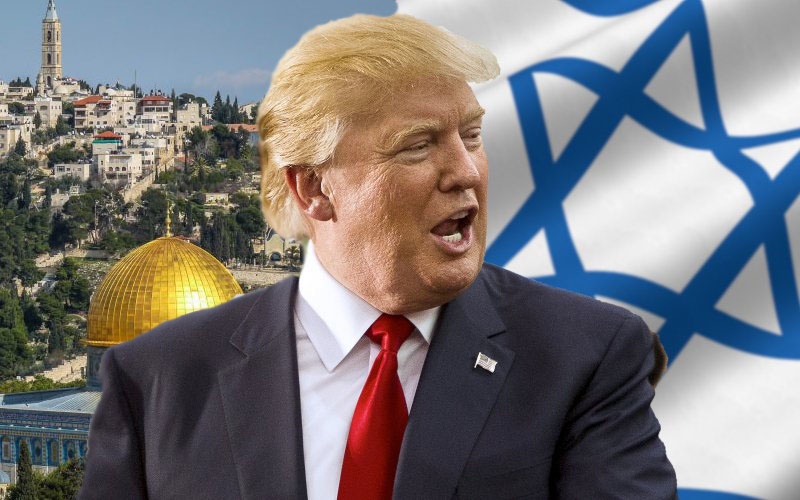 He made the decision…

Recognizing Jerusalem as the capital of Israel & transferring the United States Embassy from Tel Aviv to Jerusalem.

In general, it’s a symbolic because, of course & since Israel occupied Jerusalem with the entire Palestinian territories in addition to the rest of other territories that was occupied after the Six Day War in 1967, Israel’s control over Jerusalem was self-evident under Israeli occupation & control.

But the question of the recognition in this official formula from the largest State in the world & the one that is supposed to be the sponsor of the peace process in accordance with the principles of international legitimacy & UN resolutions that consider Jerusalem an occupied city.

The United States’ decision to recognize Jerusalem as a capital of Israel means that the idea of the US being «The honest broker» has fallen & faded for good & every issued resolution by the United Nations has no value & therefore, is no longer binding to anyone.

In other words, Trump has changed the way that political decisions are made in general considering all his previous decisions & actions on various topics of a calculated political style & taking the dimensions of any word or behavior into a style similar to the Western COWBOY.

The American decision means that it has given legitimacy to the Israeli presence on land that is considered occupied under the international law & therefore the question of the countries in the world commitment to what is known as international law has become trivial, meaningless.

Basically, there is no such thing as international law, it’s just a tool on hand to politicize any issue when western countries want to punish some state that doesn’t bow to their orders.

What Trump has done is that he just dropped the lid on the global demonstration that there is an international law governing conflicts & international relations & therefore decisions are biased to one party without another & without giving any consideration to any fears or feelings for anyone.

Donald Trump has now placed the United States at the center, to be the enemy of the entire Muslim world, having recognized the legitimacy of the Israeli presence on the entire city of Jerusalem & I will not be surprised that, the wave of hostility towards the United States will escalate & it may turn into violence.

It may not surprise you if there are terrorist acts in the United States or the world so that some extremist organizations will take advantage of this decision & take action to gain some popularity in the Muslim world.

Historically, every US president has made concessions & aid to Israel.

This has already begun since the presidency of US President Lyndon B. Johnson.

Since that date, this unwritten understanding has been respected by the successive presidents of the United States, to the other president who succeeds, so that the American president doesn’t offer many gifts to Israel & leave nothing to those presidents who will come after.

It is known that Lyndon Johnson began providing financial & military assistance to Israel that resulted in the Six Day War in 1967 & many other issues.

Nixon offered financial, military & political support for Israel, especially during & after the war in 1973, President Jimmy Carter & the signing of the first Arab-Israeli peace agreement, which took place through Camp David deal between Egypt & Israel, under full American auspices.

Also Ronald Reagan did secure all forms of support to Israel, especially during the period of Israel’s invasion of Lebanon in 1982, Bush senior, also brought more to Israel since the peace conference in Madrid in 1991 and it was a step to legitimize Israel in the Middle East by bringing together with its Arab neighbors to the negotiating table.

The situation continued during the two terms of President Bill Clinton & his sponsorship of many peace endeavors with the Arabs, beginning with the Oslo agreement between the Palestinians & Israel, and what it called Arabah Valley Treaty between Jordan & Israel, leading to the launching of the Syrian-Israeli negotiations & with continuing offer financial & military support to Israel, George W. Bush did the same by giving Israel the image of its prime minister Ariel Sharon, whom President George W. Bush described him as a man of peace, Bush has provided a lot of support to Israel & adopted the Israeli point of view continuously in all of subjects & it continued the same somehow during Obama’s administration.

For sure, during all that period, financial & military support increased with all successive presidents.

All of them were racing to give Israel more & more.

The United States vetoed any international resolution against Israel.

But the question of recognizing Jerusalem is the finish line of a summit that a US president can offer to Israel.

All previous US administrations were aware of the sensitivity of the subject & were hesitant to ignore the subject & postpone it repeatedly & it was inherited from one president to the next without being duped.

Mr. Trump has gone beyond all limits, leaving almost nothing useful to be offered to Israel, I think, from the one who will become president after him.

America has lost the role of the «The honest broker» for good.

No one cares about that anyway.

Trump has officially placed America as the enemy of all Muslims.

This factor has a role that will change a lot despite its formality, but it carries very serious implications, which will certainly cast a shadow on the political world scene, not only in the Middle East, but in whole world, and I am afraid that the United States will pay the price dearly for this decision.

The overt hostility to Muslims has become unambiguous, which seems apparent since the arrival of Donald Trump to the presidency of the United States through all his decisions & the literature of his political speech.

This will put some countries in the forefront such as Saudi Arabia the self proclaimed protector of Islam, in an awkward position & will reveal true faces & take down a lot of masks of many leaders & countries in the world.

Expecting what will happen is up to all imagination, conscience & ethics, but what I know & what I understand is the fact that the decision taken by US President Donald Trump to recognize Jerusalem as the capital of Israel will be one of the decisions that will shape a new form of American policy.
This decision will cast a shadow over the political landscape in the Middle east.

We’ll see the events unfolding without forgetting the fact that Jerusalem has never been & will never be the capital of Israel.

This is the only fact that all should recognize.