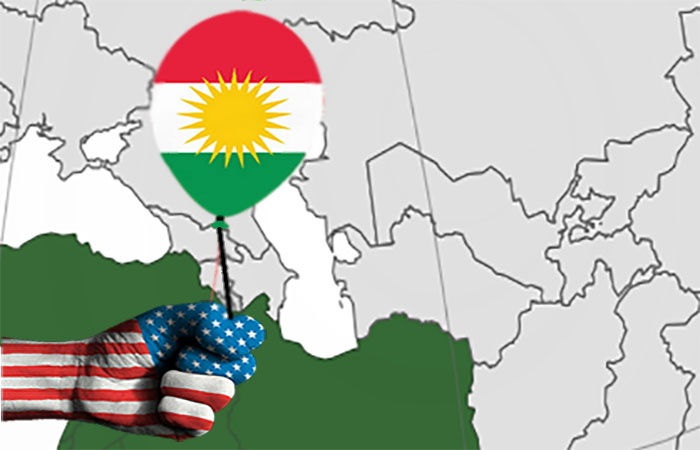 One of the biggest tragedies in our region is ethnic minorities.

Minority means that there is a group of people living in a particular geographical area led by another supposedly majority group act as government, as well as differences between the group & the rest of the population in terms of origins, ethnicity, nationality & religion in some cases.

When a state, like Israel, was founded on a religious basis, finds a Jewish state for all the Jews in the world, regardless of their origins.

In Israel there are Jews from all over the world who came to Palestine to become Israeli citizens, knowing that the vast majority of Israeli Jews have other nationalities.

In a geographical region, where number of Arabs, Muslims & Christians is multiple as large of them.

Can we call Israeli Jews a minority in such ethnic /national/ religious region?

Also in the region there are other national minorities groups such as Turkmen, Circassians, Armenians & last but not least the Kurds.

Our subject is national minorities; because the region is full of minorities that belonging to religious communities but ultimately they are Arabs at the end.

Since ancient times, minorities have been exploited by the ruling authority to be an instrument for the implementation of various actions, although most of these acts fall within the scope of hostilities & subjugation of others to the authority of the ruling group.

Most of the ruling powers have long served minorities in their interests & in the interest of preserving power.

If that power has been wronged or abused with that minority, that minority played a prominent role in overthrowing the regime.

The subject of all minorities & their history in the region is long & needs many, many pages, each of which is rich in detail & historical facts.

Our talk is about one of those minorities in the region, the Kurds.

They live in West Asia in the north of the Middle East along the Zagros Mountains & Taurus Mountains in the region that the Kurds call Greater Kurdistan.

Kurds are considered to be part of Persian ethnicities in some kind, where the Kurds are in addition to these areas in a few numbers in southwestern Armenia & some regions of Azerbaijan & Lebanon.

The Kurds are divided into four groups of Kermangi, Chaldeans, Kurans, Lors & each group has their own dialect.

The term Kurds has historically been referred to a nomadic tribes in Iran with different ethnicities & languages.

In practice, an understanding of one of the Aryan peoples that is associated with Persians / Iranians in the region & doesn’t have any links in terms of origin to the Turks or Arab ethnicities in anyway.

The distribution of the Kurds in a relatively large area stretching from Iran to Iraq, Syria & Turkey made them a dispersed population.

Their division among the four countries is as follows:

Thus are, the total number of Kurds in the four countries without counting their population at the rest of the world.

The fact that we learn from history is, the great number of certain people doesn’t necessarily means that these people are united; it’s the nature of the universe.

There are never a unified people & this theory proved to be nothing but a myth, because what separates the human race in general is the same as what distinguishes the one people.

The killer of the unification is crucial.

First, The ideological/religious & the ideas with mentality differences factor.

The second factor is personal ambitions.

These two things are what people are suffering from & the Kurds are no exception, as do all people.

They have groups like the Communist/Socialist Party (PKK), as well as groups that are connected to the region in which they live economically & commercially.

Therefore, if they oppose the concept of national & ideological intolerance, even if they are Kurds, they will cooperate with their enemies to defend their personal interests.

For example, in Kurdistan of Iraq, Massoud Barzani worked with Turkey against PKK group.

It’s fact that no one can deny & it’s not necessarily a defect because this disease, if we can call it a disease, all the peoples on earth are suffering from, look at the Arabs for example… What do we find?

How they deal with each other?

My problem with the Kurdish issue, especially during this period of time, is knowing ahead of time what will happen to them, to those who are aspire to a goal or dream, that they are forbidden to reach it at the end.

Regardless of the apparent support that a group of Kurds are getting today, it’s only a phase of a plan that doesn’t include people like us & them.

We’re only a tools that will be used for certain purpose temporarily to serve a global interests & plans that are far greater than a dreams of Kurds or another group to have one state.

Even the idea of establishing a real Israel has nothing to do with what is being said.

Let us look at what happened to the Circassians when they reached a stage of claiming independence or achieving a single independent entity, in several historical stages, because of a simple contradiction of this with the interests of the superpowers, so as not to face a wave of anger from my words I will return to history.

I find a great similarity in the story of the Circassians & the Kurds.

Both peoples belongs to the Aryan race they both have deep roots in history.

The Kurds had several entities & states that ruled in certain parts of the region to distant historical periods, all based on family/dynasty & religion.

Both were active under the rule of the Seljuk Turkmen (Turks) at a historical stage in the history of the region, until the Kurds first managed through Saladin to establish a ruling dynasty, but the essence of its rule wasn’t Kurdish national.

The Ayyubid dynasty followed by the rule of the Mamluks, which at some point reached the Circassian rule.

Their rule was also within the framework of the family or group & also on a religious basis.

Both cases were among the most important stages of Islamic & the region’s history.

Through Saladin, the Crusaders were defeated & Jerusalem was liberated, then treachery came out when Saladin’s grandson handed over Jerusalem to the Crusaders.

This is a betrayal… isn’t… Kurdish grandson of a Kurdish Sultan, Al Kamel handed over the legacy of his grandfather Saladin back to the enemy.
There are many other stories about Ayyubid family members that have nothing to do with all the achievements of Saladin.

The Mamluks played a decisive role in stopping the Mongol invasion of the East & finally eradicating the Crusader presence in the region.

On the other hand, the Mamluks, especially the Circassians, had stories full of similarities among the Ayyubid Kurds.

They conspired with each other & against each other to reach power until they reached the maximum treason when the Mamluk rule was overthrown by the Ottomans after a couple of Mamluk princes were betrayed & left their Sultan Qansu Al-Ghouri alone In the battle of Marj Dabak in the face of the army of Ottoman Sultan Salim I.

Of course, these betrayals are personal betrayals & ambitions, although some reached high levels.

Later, the result was the inevitable fate of the traitor.

their heads was separated from the rest of their body.

That was their fate by the Ottoman Sultan Suleiman the Magnificent.

The intent of all those stories is what is going on today.

Anyone who has a brief of history knowledge regarding this region & the secrets of the human psychology can discover the re-history of itself in different forms.

The most important thing is that anyone will not allow anything to happen.
Unfortunately, all what is going on today, is just games, so to speak & the distribution of roles, until the desired goal is reached, then a big holocaust will begin.

That will exceed the prescribed limit.

We no longer want the minorities to be an instrument in the hands of everyone who wants to achieve his ambitions.

The Kurds are brothers & neighbors, plus they are Muslims & lives in the same environment in which we all live & my hope that Kurds will not be fooled & fall into the trap of this Holocaust.

What France & Britain done in the past, the United States is doing today.

It is my hope that the Kurds will not be dragged behind the illusions of passion & false dreams of independence into a great holocaust that will lead them to the abyss.

The most important… of those who think wrongly that the minorities in the region will get an independent state & even if this happened, it will be short lived & purpose for just a fragmentation of the region & deepen the differences & increase the fighting & blood & hatred, no more & no less.

Do not be fooled & dragged behind the illusions & learn from history.

If you tried to change it, you will suffer the same again & again.