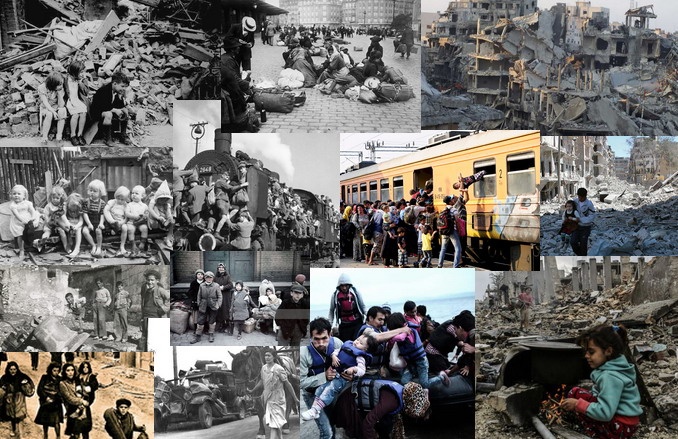 Anyone who sees the horrifying situation at the European scene in this era, will be fully aware that this old continent is on a verge of collapse, with only a violent shake-up from some major terrorist attack, or an economic whirlwind, is it takes to bring down the already shaky EU structure.

It’s known that Europe, the cradle of the old colonial countries that dominated most of the world until the middle of the last century, with countries such as, Portugal, Spain, Germany, France, and last but not least, the country that is responsible for most of the international crises, which humanity continues to suffer from it till this very day, the kingdom that was once called the Great… It’s Britain.

This will no secret to anyone, if they are a history reader of course.

The biggest farce when you hear a Spanish talk about human rights and democracy, with the record and the history of Spain full with atrocities, since the Spanish Inquisition (Tribunal del Santo Oficio de la Inquisición) 1478 — 1834, with full terrorizing & humiliation of Jews and Muslims, till the Spanish massacres in Morocco, and the civil war in Spain itself, which has claimed the lives of hundreds of thousands of people.

The farce, when you hear a country like Belgium talking about freedom and human rights, when it was the cause and the instigator of the bloody massacres between the Hutu and Tutsi tribes in Rwanda and Burundi in Africa, which the free world has condemned and threatened to intervene to stop it.

When in fact this so called free world did actually forget or simply ignored that small country that call Belgium, which it was the cause as a result of its colonial policies in that region.

We Don’t forget the Netherlands and what it has done in Africa and other regions, with them being among who were behind the apartheid regime in South Africa.

Of course Italy and what they did in Abyssinia and Libya goes beyond definition, and Germany during its presence in several African countries, and beyond the despicable Nazi era, and the terrible massacres committed by the Germans against millions of people.

The acts of Portugal and their piracy of its fleets in the African shores and the Indian Ocean.

Finally, we come to the two largest democracies in history or should I say the two biggest bloodiest countries: France and Britain, the two countries that stand behind the greatest bloody colonial past around the world from the massacres of France in Africa, specifically Algeria to Britain and what they did in India, to the Sykes-Picot agreement that caused all the tragedies in the Middle East for decades.

And even all the border crises and the problems of demarcation of borders between many countries and by chance all were under British colonialism.

Perhaps the most hypocritical in the speech of these countries is their conflicting positions from the various crises in the world.

Perhaps the war in Syria and the resulting displacement of hundreds of thousands to Europe, which unfortunately they consider the Promised Land, is only another picture of hell with a little sugar on it, but the result is the same.

Since the issue of the Syrian refugees in modern Europe has become the concern of those countries and in the forefront and ironically those countries that enjoyed a bloody colonial past, today they speak in their official discourse with all reason and ethics, whereas on the ground there is nothing in it.

Humanitarian dealings exist only in narratives, and even the security problems that these countries are facing today due to refugee’s presence have become burdensome for these countries.

The vast majority of public opinion in these countries opposes the presence of refugees on the land of their countries. They may be right.

They have faced groups of people coming from the Middle East, from various educational or moral backgrounds.

Not everyone who came to Europe are thieves, criminals backward people.

There are Many of them are well cultured, educated and have good morals and ethics, and most of them wouldn’t have left their country if it’s not what happened there.

The problem is that everyone has been treated in the same way to a great extent, and we find today in the local media in those European countries, that it been almost every day we hear & read about an incident of murder, incitement, assault, rape, harassment, or some new Nazis attacks on Refugees and many more, in daily bases.

The problem is, that the European countries are still dependent on the American position & polices.

There is not one country in Europe that claims to be independent of its decision and away from the United States.

How not, when all these countries are actually under the pretense of the United States, just name one country in Europe that doesn’t have a US military base or military presence on its soil since WWII, well they are covering it nicely under the so called North Atlantic Treaty Organization (NATO), but the curtain is, that this is a real American occupation and America’s control over the political and even economic and social decision of the European countries.

The European Union countries are rounding in the American astronomy in everything, not even thinking about the extent to which that position affects their interests.

No problem Europe … We will support you in the face of the Russian Bear, Don’t be afraid, we will supply you with heating gas … No problem, we will receive your goods and we import and back you all up, no problem.

The good thing about it today is that in the United States today, a person named Trump which he showed the true face of the US of A.

Returning to the refugee’s crisis in Europe, which we are tired of hearing the European resentment from it, and we would like here to go beyond the roll and turn and to call the names by their names and issue an open letter to all the countries of the European Union.

Enough in vain and running behind the US. position, because there is no use to it and there is no benefit from any American support, especially since the whole world knows that nothing is easier than America abandons its allies.

After several years of its futile war in Afghanistan, with America paid a heavy price for its military intervention in Afghanistan after 9/11, America gradually pulled itself out and pushed NATO into Afghanistan instead.

America has fueled all of Europe against Russia since the events of Ukraine, and all European leaders have stopped like idiots behind the American position, without even thinking a little.

If the leaders of Europe had some wisdom and independence in their political decision, they would have played an important role in resolving all problems with Russia, developing relations at all levels without problems and developing mutual cooperation between neighboring Russia and the European Union, which has a long history with, plus a common border.

Unlike America, the distant island lying at the edge of the world, indifferent to one’s own interests.

We see Europe use the same stupid technique, which is the method of economic sanctions, which proved its failure and even its negative impact on Europe itself.

As for the war in Syria, we find Europe as well made the same approach.
Here, we found ourselves ask a very simple question.

After long run & several attempts using methods which been proved that it has no positive results, have you (EU) ever thought of doing something contrary to what you are doing, even once, to see the result and make sure that you realize that the things that we’re talking about are in fact true & right?

Can Europe be independent and free in its decision and work to solve the problems in the world, which the United States always incites, and Europe is dragged behind the American position until it reaches the stage of dealing with the consequences of American behavior alone after the United States push Europe to involve and then they slowly remove themselves from the subject to later Europe find itself alone dealing with the crisis and its consequences, aftermaths, and the result of wrong policies which only will back fire on them alone!

They are many who circulating a theory in the world, that says Europeans are smart and wise, but unfortunately what we see is exactly the opposite.

What is the secret?

Is the idea of the intelligence and culture of the European people just a fairy tale that been created so that the so-called Third World countries remain without thinking, the countries that have many treasures that actually contributed to the renaissance of Europe.

Or do we see a group of Europe’s idiots who are coming to power and decision-making, such as the former French president, Mr. Hollande, to name a few, or the current British Prime Minister, Ms. May, and many others.

It’s funny to see the French football team and after decades of its participation in the World Cup, with the fact that France’s Jules Rimet who was the creator of the World cup tournament competition, after years and years of trying they finally in 1998 won with a team half of its players are from Africa, and then you see a Frenchmen speak and behave racism towards foreigners or refugees.

It’s shameful to find people in Germany talking about kicking out or mistreating refugees, when they whom burned Europe and the world in World War II and caused waves of displacement throughout Europe with killing millions of people, even in Germany itself.

Did Europe notice the great similarity to what is happening in Syria of the tragedies that happened in their countries during World War II?

What did Europe do to resolve the crisis in Syria and the extinction of this futile war, in which Europe is among the most who got harmed from it?

Would it not have been better if Europe had cooperated to resolve crises instead of adopting the American position, which usually only leads to more problems and tragedies?

In conclusion we’re back to ask the same question that we titled this article with
Europe …! till when …?

how long it takes until realize and try to learn from past mistakes?