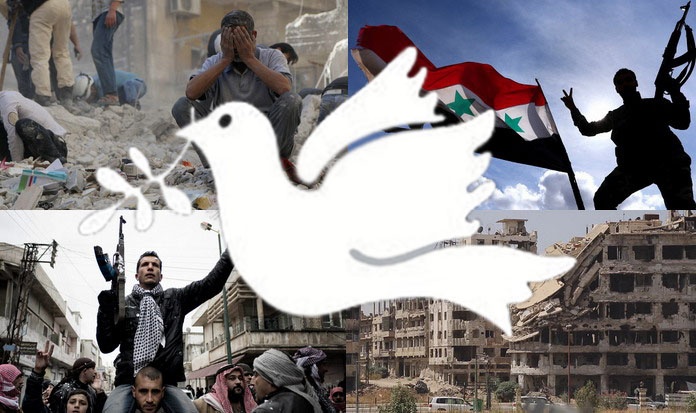 With the rapid change on the ground, with the beginning of the end of the life span of the corrupted product known as Da’ash, who has done the most required from, to serve a well prepared & planed agendas that was made for years.

With the beginning of Da’ash collapse in Iraq after regaining many areas in particular the city of Mosul, with the military operations against the very few areas that still under Da’ash control is ongoing with things will go during the following months to fully regaining all areas.

In Syria, however, all Da’ash areas, which most political & military analysts have seen them as insurmountable, with no way for Da’ash to be defeated, has started to fall one by one in a record time.

Hundreds of Da’ash militants including many of their leaders had fell along the battlefields in both Iraq & Syria, even in Libya where mostly Da’ash presence there is no more.

All this gives an indication of the end of the so-called Islamic Caliphate.

Our subject is Syria, after seven lean years where the blood reaches the knees, with almost no stone has left on stone in many areas in Syria, with all who bet on the fall of Syrian regime was more like Don Quixote fighting windmills.

The Syrian regime in fact is deep rooted & powerful, perhaps much more powerful than most of the countries regimes that fought him, with no doubt that all of them will fall within months or days if they faced less than half of what the Syrian Regime had faced in this past six years, the list of countries includes Israel.

The Syrian government spared no effort to preserve & defend themselves, fighting tooth & nail to overall Syrian territory, which they used to have no control but less than 30 percent, back then & the fighting had reached inside the capital with many thought it had inevitably fallen.

Everyone was so disillusioned & they were so wrong in all their calculations.

The regime has stood for years & faced many crises, although what happened since 2011 was not like any of what the regime had faced before.

The Syrian army, which once intervened to resolve & end the civil war in Lebanon, remained in Lebanese territories for more than thirty years (more than the French colonial period in Lebanon). The Syrian army there fought everyone & allied everyone within Lebanon during the war years.

Since the beginning of the events in Syria & the Syrian army facing everyone, even himself.

Far from elaborating on the events & going back to the situation today.

At first let’s ask some questions & leave them for all readers, each one to answer it as he desire.

1-If what happened in Syria was a revolution, where are the rebels?

2-If there are rebels who are they?

3-How can a revolution succeed without a single united strong leadership that has a popular base & real support in the country?

4-If the regime was a criminal & a murderer, with the fact that the regime committed many atrocities that we don’t defend, however, if the regime was wrong & everyone in world from Gulf money to Western weapons with thousands of fighters from all spot on earth fought him, including Syrian, why he didn’t fall?

5-How the Syria Regime Survived?

6-If we consider that all what took place in Syria was nothing but a scenario with all its players knew their roles from the very beginning, even the Syrian Regime, only ordinary people are absent from the facts & believed that everything they hear & see in the media, how it will end & what was the reason behind it at the first place?

Let’s just through with these questions & get back to the subject.

Today, all the forces that on the ground in Syria became known, each side know his role at least for some of them for now, with each side supporter is also known too.

The Syrian army with its local Syrian allies with Iraqi & Lebanese militias with other forces supported by the Russian & Iranian army has become the strongest force on the ground after they managed to recover large areas & has taken control of the largest area in Syria after several months of military operations on several fronts.

As for Syria US-backed democratic forces (majority Kurdish forces) is the second power controlling of Syria, with they’re currently at the kiln of battle to takeover Raqqa.

Of course it’s known today that coordination across the two forces is on, under the umbrella of the US — Russia.

As of the other forces that remain such as the so called Islamic State will more likely going to lose what’s left of its areas in favor of the Syrian army soon.

The other armed militias, after losing most of the sources of support, are now entering the filtering stage to gather the undesirable in Idlib to be annihilated & let some of them leave for good.

What concerns us today is the future of the country & what will be as follows:

The text of the project, which was agreed upon between the United States & Russia, is already moved forward on its implantation phases on the ground, were its first phase was the agreement of the De-escalation areas.

What has been agreed upon is that Syria will be converted into a federal state, so that the Syrian provinces will be transformed into federations, which will be similar to the system of government in the United Arab Emirates, but with ballot boxes.

Each province will have its main city, its headquarters, its government, with head of government or Governor with authority & budget from the central federal government in Damascus, also there is a talk to either establish some new provinces or make some adjustments in the administrative borders of the current provinces in accordance with the new situation.
All new federal provinces will have its own power to manage the wealth & resources in accordance with what will be agreed on in the new state Constitution, with the presence of Parliamentarians for each federal province at the federal parliament in Damascus, their role will be similar to that of many federal parliaments such as the House of Representatives in the US & the Duma in Russia.

Basically the Syrian Government in Damascus has actually started preparing for these transformations.

In the next stage, a new constitution for Syria will be drafted & prepared by Syrians, with International & regional consensus, which includes the principle of federalism.

Followed by elections within a period, to be determined within/outside Syria under the United Nations & the international community supervision.

The general conditions that are almost entirely got consensus:

1-Approving of Syrian President Bashar Al-Assad to stay in power as President during the transition period & would run in the next presidential election.

2-The next Syrian presidential system is being currently determined as of its rules, which will be headed by the President under a Presidential Council combines an Alawi President with two Vice Presidents, one is Sunni & the other will represent the minorities in Syria (more likely to be Christian or Kurdish) with some suggestions to rotate the positions without keeping them an exclusive for particular sect.

4-Ensure the safety of all minorities with their right to join the next Government, which will be mixed to include all spectrums of the Syrian society from the current regime & the opposition with leaving choosing them according to the course of stages & the consensus according to the election results & the new constitution, with joining some opposition figures to the transitional government upon general reconciliation.

5-End armed manifestations & heavy weapons & fight whoever opposes, where all Syrians armed militants will lay down their weapons & have chance to join the Syrian army.

6-There is an international consensus to collect all non-Syrians militants in Idlib for filtering to be later take them out or let some of them go & leave Syria.
(idlib is heading toward annihilation, said former US Secretary of State John Kerry in his last meeting with a Syrian opposition delegation).

7-The US troop presence along Turkish troop will remain in some areas until the finalization.

8-The Russian forces are staying with Iranian presence.

in conclusion, We can say that Russia is the architect & the controlling party of the situation in Syria, where they’re in the driving seat & succeeded in put all other players at the back seat or perhaps tossed of them completely out of the car.

However Russia should be careful & extremely cautious to avoid any sudden coup or any manipulation at the last minute from any side.

The tragedy in Syria must end & Russians must avoid drinking vodka at least for a while to stay awake until everything set & done, because the state of drunkenness is not allowed, even as of euphoria & Victor celebration, in this terrifying war that it’s fragments reached all parts of the world.