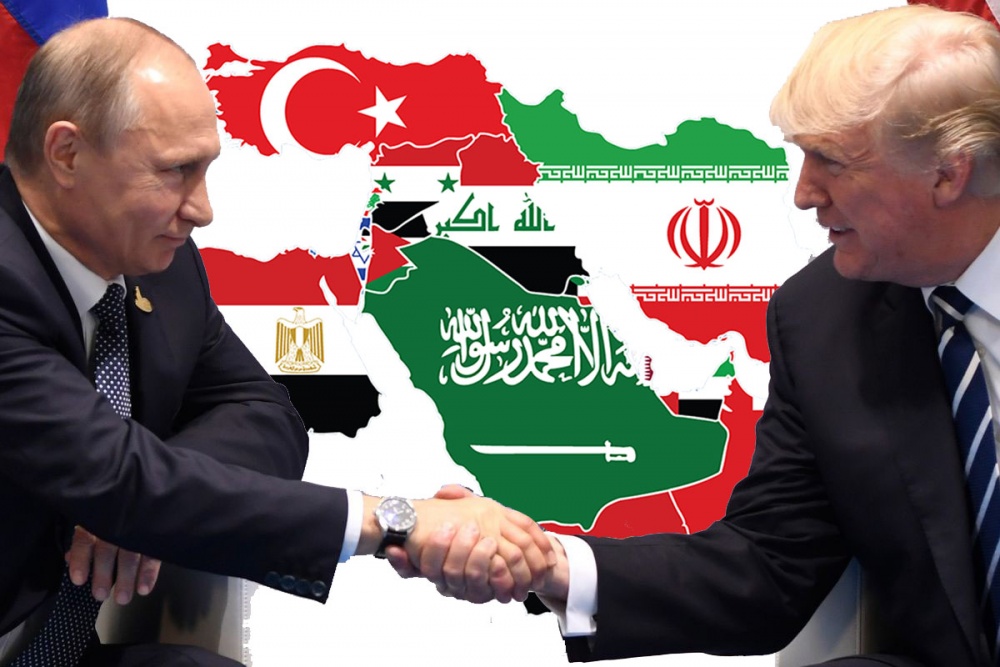 As we approach the end of the war against Syria, none of the initial goals of the Anglo-Saxons have been clearly reached.

Not only has the Muslim Brotherhood failed to triumph via the Arab Springs, but they seem to be losing all over the region, apart from in Qatar and Turkey.

And although Syria is mostly destroyed, Syrian society and its multi-confessional model has resisted – the Silk Road should finally be re-opened.

In any case, Israel and Turkey are close reaping the benefits and disengaging, in their own way becoming winners in this war.

Everyone expected that the crisis opposing Saudi Arabia and Qatar would facilitate the resurgence of the Riyadh-Damascus-Cairo axis which had dominated the political life of the Arab world until the «Arab Spring». Nothing of the sort occurred.

Perhaps Prince Mohammad bin Salman still hopes to win in Yemen, and therefore sees no point in reaching out to Syria.

Or else the Saudis, who once led the Arab revolt against the Ottomans, consider today that it would be too dangerous to take the side of Syria against Turkey.

It is true that, during last week’s Crans-Montana negotiations, the UN, the IMF and the European Union supported the occupation of Northern Cyprus by the Turkish army, regardless of the fact that it is illegal under international law.

Evidently, although it has become fashionable in the West to vilify Erdoğan’s dictatorship, NATO offers unconditional support for the Turkish military deployment in Cyprus, Syria, Iraq and Qatar.

Since «Nature abhors a vacuum», it was Qatar who made contact with Damascus.

For President Bashar Al-Assad, this is a less meaningful catch than Saudi Arabia, but it’s a catch nonetheless.

It represents one less state engaged in the war against his country – and in fact, the only enemy states left, apart from the US multinationals, are the United Kingdom, Turkey and Israel.

The meeting between Presidents Vladimir Putin and Donald Trump, during the G20 in Hamburg on 7 July 2017, seems to have turned the tables!

The meeting was originally planned to last half an hour, but in fact lasted two hours, forcing other heads of state and foreign government to wait outside.

Although we do not know what the two Presidents and their Ministers for Foreign Affairs actually decided, we do know what they negotiated.

Israel, Egypt and the Arab Emirates proposed an end to the war in Syria by implementing Tel-Aviv’s victory over the Palestinian Resistance, which is currently divided between Fatah, which governs Ramallah, and Hamas in Gaza.

However, Mahmoud Abbas’ Fatah has progressively sunk into corruption, and now collaborates openly with Israel.

Meanwhile Hamas, created by the Muslim Brotherhood under the auspices of the Israeli secret services in order to weaken Fatah, has discredited itself first of all by its terrorist attacks against civilians, then by its unbelievable behavior during the war against Syria.

As a result, only Turkey and Iran continue to support Hamas, which detests all the other states.

Shamelessly, Hamas, which had already allied itself with Mossad and Al-Qaida in order to massacre the leaders of the PFLP in the Syrian camp at Yarmouk in 2012, once again begged Tel-Aviv for forgiveness.

This is the source of the incredible plan to reunite the two major Palestinian factions, to oust old Mahmoud Abbas, to recognize a puppet Palestinian state, and to install as its leader … General Mohammed Dahlan.

Mohammed Dahlan is the leader of Fatah who secretly became an Israeli agent, fought violently against Hamas, and then poisoned Yasser Arafat.

Unmasked, he was excluded from Fatah, fled to Montenegro, and was found guilty in absentee.

For the last few years, he has been living in the United Arab Emirates, where he enjoys a fortune of 120 million dollars misappropriated from the Palestinian Authority.

He will supposedly be welcomed in Gaza by his historical enemies from Hamas, including the new «Prime Minister» Yahya Sinwar, whom, it transpires, is one of his childhood friends.

Forgetting the past, he will be tasked with fighting the Army of Islam, in other words, the Palestinian branch of Daesh.

This plan, if indeed it were to be implemented, would mark the definitive liquidation of the Palestinian Resistance, after 70 years of struggle.

It’s in this context that we should understand the announcement of a Putin-Trump agreement concerning three regions in Southern Syria.

US troops would be authorized to deploy there, ostensibly to keep the peace, but in truth to create a demilitarized zone between the Syrian Golan and the rest of the country.

Iranian troops would not be allowed to approach Israel.

Consequently, the Golan, illegally occupied by Israel for forty years, would be considered de facto as annexed, even if the word would never be used.

Local village councils would be elected in October 2018, in conformity with Israeli law.

There would be no reaction from Russia, and the United States would turn a blind eye to its Crimean obsession.

Peace could be concluded in the rest of Syria with the exception of the zone taken from Daesh by the Kurds and the zone controlled by the Turks.

Washington and Moscow would allow the latter to sort out their differences with the Kurds, in other words, to massacre them.

Exactly the way in which Henry Kissinger supported the Iraqi Kurds against Saddam Hussein, before abandoning them overnight with their dream of a Kurdistan.

Finally, the Turkish army would remain to occupy Al-Bab, as it already occupies North Cyprus and Bashiqa in Iraq.

The Palestinians and the Kurds will pay for their mistake of having fought for a country outside of their territory (in Jordan and Lebanon instead of Palestine for the former, in Iraq and Syria instead of Kurdistan for the latter).

Israel and Turkey will therefore be the only two states who will have benefited from six years of war against the Syrian People.